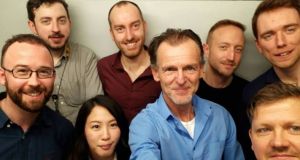 Jim Doherty Trio featuring Richie Buckley
Arthur’s, Tomas Street, Dublin 8, arthurspub.ie
Here’s an early Christmas present for fans of hard-swinging mainstream jazz: pianist Jim Doherty is a national musical treasure, who has been a central figure in the history of jazz in Ireland since the early 1960s. Doherty’s regular trio is staffed with grandees of similar credentials, including bass eminence Dave Fleming and drum master Myles Drennan. Add the mellifluous, ever-popular Richie Buckley on saxophone, and you have what might be regarded as a classic jazz dream team.

Paul McIntyre Trio & Mike Nielsen
Arthur’s, Thomas Street, Dublin 8, arthurspub.ie
Northern Ireland pianist Paul McIntyre comes with some pretty heavyweight genetic inheritance, musically speaking. His father was (and still is) the great Derry jazz saxophonist Gay McIntyre, and his great uncle was renowned Irish tenor Josef Locke. The younger McIntyre is in the capital this week leading a trio made up of leading Dublin rhythm-section players, bassist Dave Redmond and drummer Myles Drennan (see also Saturday, December 21st). Joining the pianist out front is virtuoso Sligo-born guitarist Mike Nielsen. Although he has been one of the most inquisitive and innovative Irish musicians of the last quarter century, exploring microtonality and the outer reaches of free improv, Nielsen is equally capable of playing straight ahead, so it will be interesting to hear exactly where the mercurial guitarist leads McIntyre and his trio.

Conor Guilfoyle Octet
Arthur's, Thomas Street, Dublin 8, arthurspub.ie
As one of Ireland’s leading drummers, Conor Guilfoyle has toured internationally with big names, such as saxophonist Dave Liebman and guitarist John Abercrombie, but perhaps his most lasting contribution to the domestic scene has been the succession of excellent mid-sized ensembles he has led, particularly those dedicated to the music of Cuba. The Dún Laoghaire drummer’s latest mid-sized ensemble is defiantly old-school, with a line-up modelled on the famous Miles Davis recordings from 1949/50 that came to be known as Birth of the Cool. Music by Davis, Tadd Dameron, Benny Golson, Horace Silver and Gil Evans will be on the stands, and behind them, a finely tuned eight-piece that includes trumpeter Bill Blackmore, trombonist Paul Frost and saxophonists Yuzuha O’Halloran and Peter Dobai.