Ed Sheeran steps back from Twitter. Maybe we should all do the same

Social media has shown us that when humans gather with no rules, savagery prevails 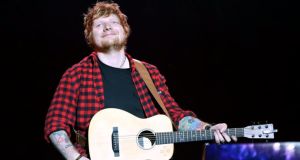 Ed Sheeran quits Twitter because of the abuse he’s been getting on the platform. Photograph: Yui Mok/PA Wire

Poor old Ed Sheeran. The Grammy-award-winning, sextuple-platinum selling, multimillionaire singer announced this week that he was opting out of much Twitter activity because of the abuse he’s been getting on the platform.

“One comment ruins your day. The headf**k for me has been trying to work out why people dislike me so much,” he told the Sun.

Sheeran thought fans of Lady Gaga might be behind the onslaught of abuse; the BBC suggested it was people who hated his appropriation of Galway Girl.

(A Twitter search for “irritating ginger busker” and “Galway Girl” confirms the plausibility of either theory.)

“I go on it and there’s nothing but people saying mean things. Twitter’s a platform for that,” he said.

It is tempting to accuse Sheeran of being a tender little snowflake, or to suggest he should toughen up in the face of a bit of slagging – even the occasional “mean thing” coming his way. But the reality is that an ugliness has crept into public discourse; nowhere more so than on social media.

Sheeran is not alone in finding that the platform has become a bewilderingly hostile place. In fact, this is his second time to give up on social media.

Kanye West recently deleted both his Twitter and Instagram accounts. “It wasn’t a healthy outlet for him,” insiders told US Weekly.

Star Wars actor Daisy Ridley was hunted off Instagram by the gun lobby.

The fact that Donald Trump loves Twitter may be all anyone concerned with the degradation in the quality of public discourse needs to know about it.

Why wouldn’t he love Twitter? It is hard to imagine a platform better tailored to the needs of a narcissistic, misogynistic megalomaniac bully who somehow blustered his way to power in the age of fake news and filter bubbles.

On Twitter, with enough likes and retweets, even the wildest, most hateful claim can acquire the veneer of what Stephen Colbert called “truthiness”.

This week, Trump tweeted a doctored video of himself at a WWE match, pummeling a figure with a CNN icon for a head. Even by Trump’s standards, it was a shockingly crass way for a world leader to make a point (again) about his dislike for the media.

I have been almost a daily Twitter user for over eight years, half a lifetime in technology terms. Over those years, my enthusiasm has waxed and waned, though I have never actually – yet – done a full Stephen Fry-style flounce.

In the beginning, I went along with Margaret Atwood’s memorable description of it in 2010 as “like having fairies in the bottom of your garden”. I was, by turns, beguiled, provoked, intrigued and inspired by it. It was where I went to banter, spar, discover and engage.

I lost hours of creative time in the process, but I gained a lot too. I rekindled old, valuable friendships, made new ones, explored ideas and attracted career opportunities. For a long time, it was unequivocally a force for good in my life.

These days, though, my enthusiasm is definitely in a waning cycle. There’s a brutality now in the way we communicate with one another that did not exist before social media. It’s no longer enough merely to disagree with someone: you also have to attack them personally, or list all the reasons why you wouldn’t deign to have sexual intercourse with them.

Recently, a man who disliked something I’d written tweeted at me that I’d die alone, childless and surrounded by cats – news, I replied to tell him, that would alarm my husband, kids, and allergist.

I’ve never had rape or death threats, but someone who, I discovered, was mentally ill made threats of a vaguer nature against me. Someone else reposted photos from my Instagram account to try to work out where I lived (the photos were taken in a public park, not my garden, so as stalking attempts go, it was hilariously inept).

And, like all women who occasionally express opinions in public, I’ve had remarks about my appearance. Yes, I have a giant forehead; no, I can’t say I’m devastated that you don’t want to sleep with me, anonymous egghead man.

I can take these occasional torrents of abuse, and I might even enjoy them – I’ve found by far the most effective way to derail a keyboard warrior is to address them with that most reviled of three letter words, “hun”. But though the torrents are occasional, the atmosphere of negativity and nastiness is not.

If the Internet was supposed to be a giant social experiment – the largest gathering of humans in the history of the world – then the experiment has failed. It has not heralded in a new age of empathy, creativity and progress.

Nothing will change until Twitter and Facebook recognise, as they must, that they are not “just platforms”; they are publishers with a responsibility

Social media’s great gift is to show us that when you allow humans to gather with no rules, restrictions or meaningful consequences for their behaviour, savagery will prevail.

A study carried out in May 2016 by the UK’s Demos think tank monitoring the use of the words “slut” and “whore” by Twitter users found that over 200,000 aggressive tweets using those terms were sent to 80,000 people in just three weeks. Half of those using the terms were women.

In March 2017, the World Jewish Congress found that a new antisemitic message was posted on social media every 83 seconds – two thirds of them on Twitter.

Germany is now threatening to fine social media companies up to €50 million if they do not delete illegal, racist or slanderous comments within 24 hours.

But nothing will change until Twitter and Facebook recognise, as they must, that they are not “just platforms”; they are publishers with a responsibility to police the content they produce.

Figures published in June by the European Commission were hailed as progress: they found that Facebook reviewed nearly 58 per cent of flagged content within 24 hours — up from 50 per cent in December — compared with 42.6 per cent for YouTube and 39 per cent for Twitter. It’s not nearly enough.

For Sheeran, this is not just an academic debate. He has previously spoken about his experience of being bullied as “a very weird child”.

At the American Institute for Stuttering gala in 2015, he told how he had a port wine stain birthmark on his face, hearing problems and “very big blue NHS glasses”.

“Stuttering was the least of my problems when I went to school,” he said in a speech that went viral and probably offered comfort to children currently going through some version of the same thing.

“Be yourself. Embrace your quirks. Being weird is a wonderful thing … I did alright. You can do alright as well,” he said.

He forgot to include an addendum: so long as you stay away from social media.

‘You can’t but conclude, the least safe place for any of us this weather is in our homes’
3