Dublin Bowie Festival celebrates The Man Who Sold the World

Gig of the week: producer Tony Visconti and drummer Woody Woodmansey are guests 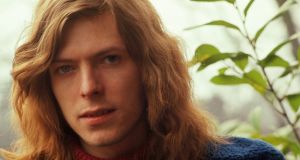 Each year, the Dublin Bowie Festival highlights a particular album of David Bowie’s, yet the event organisers have lately been blessed with the prolificacy of the man: in a stretch from 1969 to 1980, he released a dozen albums of original material, virtually one per year. This has given the festival choice, focus and 50th-anniversary parties to plan up to 2030.

If that date is a tad too far-reaching for you, then let’s fall to earth and get back to basics: happy 50th birthday to Bowie’s 1970 album The Man Who Sold the World (TMWSTW), the album that built the foundations for a run of the aforementioned consecutive work that many believe constituted the most creatively inventive sequence of records by any rock musician.

This is all well and good, of course, but if any festival aims to make a cohesive, contained impact, then it has to programme not just a variety of events that tie in with its primary themes, but also what you might call a marquee name. Managing to do this without a sponsor or commercial benefactor of any kind is even trickier, but Dublin Bowie Festival clearly has contacts in David Bowie World. Two words: Tony Visconti.

While it is, of course, possible to appreciate or know Bowie’s music inside out without being aware of who Tony Visconti is, it might be beneficial to realise that he was Bowie’s right-hand musician/producer/friend from TMWSTW to his final four albums (2002’s Heathen, 2003’s Reality, 2013’s The Next Day, 2016’s Blackstar). In other words, Visconti wasn’t just in the inner circle, he was at the centre.

There are two key events featuring Visconti – one as a musician, the other as an interviewee. The former is when his band Holy Holy (which he formed with former Spiders from Mars drummer Woody Woodmansey, and which name comes from a 1971 Bowie non-hit single) play the Olympia Theatre (7pm, January 11th), at which the entirety of TMWSTW is performed along with other choice early to mid-1970s Bowie songs. The following day (Royal College of Surgeons, 3pm, January 12th), at the event Face to Face with the Men Who Sold the World, Visconti and Woodmansey will be in conversation with this writer.

Astutely, one of the sub-textual strands of TMWSTW will be covered during the festival. An early album image, which features Bowie wearing a dress, triggered what many observers deem to be one of the first declarations from a rock star of their bisexuality, with Bowie subsequently leading an early game-changing charge in this area. Events that touch on this include a Q&A with UK author Darryl W Bullock (6pm, Bloody Mary’s, January 8th) about his book, David Bowie Made Me Gay, which outlines how LGBTQI culture has influenced the mainstream.