Gig of the week: New Year’s Eve festivals across Ireland

Gavin James in Killarney, Walking on Cars in Dublin, ASIWYFA in Belfast 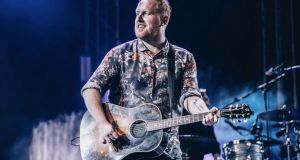 It is, as we all know, a tricky time of the year – perhaps the trickiest. If you say you’d rather not go out on New Year’s Eve, then some might (actually, they will) perceive you as being an odd sort. Who in their right minds, these people don’t ask, would prefer a quiet night in with close friends when they could be out on the tiles, on the lash and the razz, with a city full of inebriated strangers? And then, of course, there are music fans.

New Year’s Eve (never mind whatever arrives before and after) is one of those nights when the old favourites make it their mission to get you in the right mood. One might think that the old favourites would sometimes much prefer to make it easy for themselves and put their feet up for the night that’s in it, but if entertainment is the name of the game – and if the game is paid well enough – then they are duty-bound to shout it out.

And so, going directly to December 31st, we have the following: if you’re after a relatively quiet night that rings out the old and brings in the new, then Gavin James at INEC, Killarney, Co Kerry, will do the job for you. James is adept at fusing infectious pop melody lines with songs that this writer has seen people shed a tear to. We would shrewdly guess, also, that this particular gig will appeal to couples that view 2020 as the year in which they make it or break it. Certainly, James’s songs have a tendency to peer into the cracks of a relationship, and by the end of them to either tear it further apart or seal it up. With 2020 being a Leap Year, we are going to safely bet that some people will have their eye on the prize come February 29th.

For something just that little bit noisier, heavier and more in your face, be advised that Belfast band And So I Watch You from Afar (ASIWYFA) will be bringing their granite-tough but layered music to Whelan’s, Dublin, on New Year’s Eve. Ostensibly, they are on a nationwide tour (they also play Cyprus Avenue, Cork, December 29th, and Róisín Dubh, Galway, December 30th) to perform in its entirety their self-titled debut album, which celebrates its 10th birthday. The band will, of course, be performing tracks from more of their albums, but such revelries aside you can absolutely guarantee there will be no such thing as slow dancing here. Rather, gird your loins, put on appropriate footwear, protect yourself from tinnitus by wearing any form of earplugs, and shield yourselves from the push and shove of the circle-of-hell ruck. In other words, have a ball and blast with one of the best (largely) instrumental bands this land has ever produced.

If music on the folk spectrum is more your thing, then head west to see Lankum and Junior Brother co-headline at Róisín Dubh, Galway. Both acts released albums earlier this year and have spent the best part of it honing their live performances. Each has their own singular specialities: Junior Brother (aka Ronan Kealy) wrangles you with folk tunes that first rouse you and then make you smile; Lankum take tradition and squeeze it until it adopts a different form. All good, then.

Two Dublin-based NYE gigs couldn’t be more different from each other. The Pillow Queens show at the Workman’s Club is for fans of superlative guitar/pop, while NYF Countdown Concert, Custom House Quay, delivers the biggest bangs on the night/morning with music from Kerry’s Walking on Cars and Northern Ireland’s Ash, and more fireworks than you’ll be able to count.