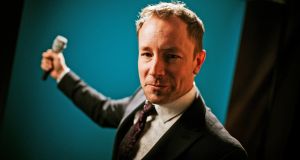 Velvet Lounge Band
Mint Bar, Dublin
facebook.com/themintbardublin
Drawn from the front ranks of Dublin’s professional jazz musicians, the Velvet Lounge Band was largely conceived as a wedding and corporate band, and opportunities to hear this classy outfit perform in public are not exactly plentiful.

Vocalist Cormac Kenevey and pianist and musical director Cian Boylan form the core of the band, but expect a talent rich line-up across the stage for this free festive gig downstairs in the Westin Hotel.

Fiadh Rua Gregg
Workman’s Club, Dublin
facebook.com/dublinjazzcoop
Fiadh Rua Gregg will be best known to gig goers in the capital as the voice of bashful hip-hop-meets-jazz five-piece Shy Mascot, but here’s a chance to hear the soulful Dublin vocalist dig down into the great American songbook for the latest offering from the musician curated Dublin Jazz Co-Op series in the intimate upstairs room at the Workman’s Club overlooking the Liffey.

Organ Freeman
Big Romance, Dublin
facebook.com/TheBigRomanceBar
One of the year’s most popular residencies has been organist Darragh Hennessy’s early evening sessions at the Big Romance with guitarist and singer Charlie Mooney and drummer Faolán Collins.

There’s jazz sounds on vinyl from 4pm and the band hits the stage at 6pm for some hard-swinging hard-bop.

Jimmy Smyth Band ft Jake Curran
Arthurs, Dublin
arthurspub.ie
There aren’t many Irish musicians who can move as effortlessly between genres as guitarist Jimmy Smyth. The Navan-born six-stringer scaled the rock’n’roll heights in the late 70s, leading his own Bogey Boys band and drawing praise from no less a genius than Rory Gallagher.

In the following decades, through stints in the US and elsewhere, Smyth became a first call session player for everyone from Chaka Khan to Roger Daltry to Tony Childs.

However, when left to his own devices, Smyth has been increasingly attending to his jazz muse, and the band he has assembled here, including Van Morrison’s regular bassist Paul Moore, Niall Horan guitarist Jake Curran and top session drummer Guy Rickarby, is capable of following the mercurial Smyth wherever his fancy takes him.

What did Jesus really look like, as a Jew in 1st-century Judaea?
5

Are the political parties tuned in to the needs of musicians?
6

Florence + the Machine at Electric Picnic: An incandescent finale
10