The best classical music gigs to go to this week

Schubertreise XXII in Dublin and Comhar Vocal Ensemble in Kerry 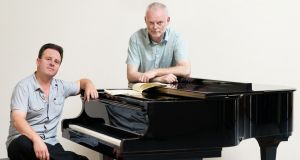 Schubertreise XXII
NCH, Kevin Barry Recital Room, Dublin; link
Bass Conor Biggs and pianist Michel Stas reach the 22nd instalment of their survey of Schubert’s songs at the National Concert Hall’s Kevin Barry Recital Room on Sunday afternoon at 3pm. There’s no better description of what’s on offer than Biggs’s own. “Michel Stas and I will be performing songs written towards the end of 1815 (including seven written on the same day!). Exquisite miniatures such as Die Sommernacht (written entirely in recitative), Liane (shades of O Holy Night) and Der Jüngling an der Quelle (reminiscent of Sailing By) are cheek by jowl with masterpieces such as Dem Unendlichen and both versions of An den Mond. James Macpherson (“Ossian”) makes a stirring appearance in Shilric und Vinvela, and Theodor Körner’s hilarious shaggy dog story Das gestörte Glück rounds off an eclectic afternoon.

Comhar Vocal Ensemble
St James’ Church, Killorglin, Co Kerry; https://www.dioceseofkerry.ie/events/killorglin-parish-concert/
The eight voices of the vocal ensemble Comhar and conductor Daniel Beuster take their Christmas celebration, O Magnum Mysterium on a four-stop tour starting in Killorglin. They then bring their mixture of Rachmaninov, Britten and “traditional carols” to St Mary’s Cathedral, Limerick (on Friday), and the Hugh Lane Gallery’s Sundays at Noon series followed by a quick change of coast for a final concert in St Augustine’s Church, Galway, at 8pm the same evening.

Patrick Stewart returns to Starfleet: ‘It’s inconceivable to me that I should retire’
3 Welcome to the child sex capital of Europe
4

Rise of the killer robots: The future of war
5