Trad gigs of the week: Bounty of riches at Scoil Gheimhridh Ghaoth Dobhair 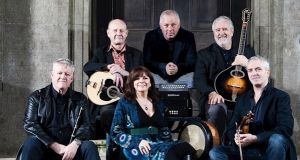 Scoil Gheimhridh Ghaoth Dobhair
Various venues until Wednesday, January 1st
This winter school gathering is a mecca for traditional music lovers from across the globe, with visitors regularly travelling from as far afield as Japan and Australia, to the many intimate sessions and concerts in this glorious setting at the foot of Mount Errigal. Dervish boldly take the reins for the infamous New Year’s Eve concert, and there are concerts from Julie Fowlis and Zoë Conway, with Eamonn Doorley and John McIntyre, as well as Fidil and Uaine, a new band featuring Bríd Harper and Tony O’Connell. An embarrassment of musical riches. scoilgheimhridh.com

Mick Hanly
The Four Provinces, Kimmage, Dublin 12
Having been on the road with Moving Hearts marking their 40th anniversary earlier this year, Hanly returns to the road solo, and will air his extensive original songbook, including his enormously successful Past the Point of Rescue.

An Góilín Singers Club
36 Parnell Square, Dublin 1
Jerry O’Reilly, Eilish Kennedy, Antaine Ó Faracháin, Máire Ní Chróinín, Mick Keeley, Fergus Russell, Frank Nugent and other club regulars start the new season with a club night, for those stalwart singers and listeners in search of quality songs. This open session is the perfect antidote to the post-Christmas excess, with traditional and folk songs in any language. goilin.com