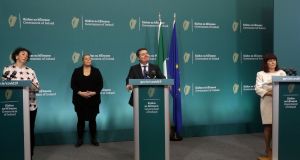 The Arts Council was quick off the mark last month. On Friday March 13th, the day after Taoiseach Leo Varadkar announced the closure of schools and cultural institutions and set limits on the size of public gatherings, the council announced new rules of engagement for its major clients.

Well, actually, the Minister for Culture, Josepha Madigan, made the announcement, after a meeting with “representatives from the National Cultural Institutions, the Arts Council and the wider arts community”. Incredibly, this was a round-table meeting (photo on Twitter) which took place after Varadkar had already cautioned the reduction of “unnecessary face-to-face interaction in the workplace”.

The Arts Council’s decision was to honour “all funding commitments” made to organisations under four major funding schemes. Organisations were asked to “prioritise commitments to artists”. The council said it would make 90 per cent of existing funding awards available “with immediate effect”. And it promised that “there will be no financial penalties for organisations/individuals that are unable to deliver key activities/key services arising from the impact of the Covid-19 virus.”

What could go wrong? The Arts Council answered that question last week, by announcing a separate €1 million fund “to enable artists to make new and original art during the Covid-19 crisis”. Only half the money is new. The grants are at a flat rate of €3,000. And the council’s widely loathed online application process is mandatory.

The scheme has had a scathing response from the arts community. You only have to look to Scotland to see why. Creative Scotland, the Scottish equivalent of the Arts Council, announced three new funds totalling £11 million (€12.5 million), with grants from £500 to £50,000. For Scotland’s population of 5.45 million, the cost works out at €2.29 per head of population. By contrast, the €1 million for Ireland’s population of 4.9 million works out at 20 cents. Comparisons with a country such as Germany, where culture is valued in an entirely more sympathetic way, would be even more invidious.

The Arts Council’s response dealt in the first instance with the survival of major cultural institutions. The depredation and death of cultural institutions that followed the last financial crisis is something the council clearly does not want to see repeated. But the council’s thinking seems to have been a lot less sensitive to the issues facing the large number of individuals whose work forms the outputs of those selfsame institutions. And the longer-term fate of the major venues, festivals, arts centres and resource organisations which benefited from the council’s initial announcement is anything but clear.

The council’s immediate focus has been to quantify how severe the damage being inflicted actually is. Late last month it surveyed the hundreds of organisations to which it had extended such a welcome and immediate lifeline. Its goal is to establish the extent of the immediate damage: the hundreds of job losses, the thousands of cancelled events and activities, the six-figure number of tickets that will have to be refunded, the millions of euro already committed that have been sucked up into a Covid-19 black hole, and the plight of the thousands of individual artists, many of whom are already among the worst-paid workers in the State.

At the other end of the scale there may be organisations which will be left in the black by the cancellation of activities and so be able to retain staff and even run a surplus. The fine print of contracts – and insurance policies, where they apply – will end up defining the range of possibilities.

The council faces the same set of unprecedented imponderables that we are all confronting. How long with the crisis last? How will the transition to normality be implemented? How will we all respond to the idea of rubbing shoulders with each other at concerts, plays and exhibitions when those gatherings are eventually restored?

Above and beyond all of that, the council has to deal with its own paymasters in the Department of Culture. Ireland is already bottom of the league when it comes to the support of the arts and culture through the public purse. And the country’s track record of supporting culture in a crisis is not exactly stellar.

The Arts Council is run on the arm’s-length principle, with the world of politics and the power structures of the civil service removed from everyday decisions. Culture Ireland was originally run in the same way, but has long since been subsumed into the Department of Culture.

Culture Ireland’s big Covid-19 gesture is Ireland Performs, a collaboration with Facebook Ireland to offer artists €1,000 “towards an online presentation/performance (in Irish or English) of their work”. It’s “of” not “about” their work. So, how does “in Irish or English” relate to the visual arts, or abstract music? And, aside from that, there’s the mind-boggling stipulation that “each online presentation would last between 30 and 40 minutes and should be completed within a week of decision”. This is in a world where the average YouTube video is around four minutes and Facebook videos are even shorter.

You have to be seriously worried about what the cultural mandarins are actually thinking about.