Lovely Day and Lean on Me singer dies of heart complications, according to family 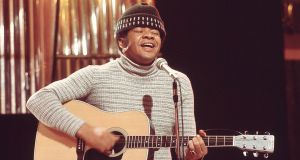 Bill Withers: the Lean on Me singer in 1972. Photograph: Michael Putland/Getty

Bill Withers, the influential US soul singer who wrote Lean on Me, Ain’t No Sunshine and Lovely Day, has died aged 81 of heart complications, according to his family.

Withers wrote and recorded several other major hits, including Use Me and Just the Two of Us. He won three Grammy Awards and entered the Rock and Roll Hall of Fame in 2015.

Withers is survived by his wife, Marcia Johnson, and their two children, Todd and Kori. The family said in a statement: We are devastated by the loss of our beloved, devoted husband and father. A solitary man with a heart driven to connect to the world at large, with his poetry and music, he spoke honestly to people and connected them to each other. As private a life as he lived close to intimate family and friends, his music forever belongs to the world. In this difficult time, we pray his music offers comfort and entertainment as fans hold tight to loved ones.

Born William Harrison Withers jnr in 1938, he faced a difficult childhood in Slab Fork, West Virginia. A stutter held him back from making friends, and, after his father died when Bill was 13, his grandmother helped to raise him.

Withers would write a tribute to her with the song Grandma’s Hands, from his 1971 debut album, Just as I Am: “Grandma’s hands/ Used to issue out a warning/ She’d say, ‘Billy don’t you run so fast/ Might fall on a piece of glass/ Might be snakes there in that grass.’” The intro was memorably sampled by Blackstreet for their 1996 R&B classic, No Diggity.

Withers spent nine years in the US navy before pursuing a career in music. After moving to Los Angeles in 1967, he found a job making toilet seats and recorded demos through the night. Possessed of a smooth and soulful baritone, he signed to Sussex Records and enlisted Booker T Jones to produce Just as I Am. That album spawned the hit Ain’t No Sunshine, which won Withers his first Grammy for best R&B song.

He poured his experiences of growing up in Slab Fork, a tough coal-mining town with a strong community ethos, into Lean on Me. Heavily influenced by the church hymns and gospel music of his childhood, it was his first and only No 1 single on the US Billboard pop charts.

His time with Sussex Records didn’t end well. “They weren’t paying me,” he told Rolling Stone in 2015. “They looked at me and said, ‘So I owe you some money, so what?’ I was socialised in the military. When some guy is smushing my face down, it doesn’t go down well.” He claims to have erased an entire album that he had recorded for the label in a fit of pique. “I could probably have handled that differently,” he said.

Withers signed with Columbia Records and married Johnson, his second wife, shortly afterwards, in 1976; she eventually became his manager. Withers continued having hit records with Columbia, including the laid-back and optimistic 1977 track Lovely Day, which contains one of the longest sustained notes ever recorded, at 18 seconds. He also cowrote and sang on Grover Washington jnr’s 1981 classic Just the Two of Us. After three albums in three years, Withers claimed Columbia’s head of A&R, Mickey Eichner, prevented him from going into the studio, leaving a gap of seven years between ’Bout Love (1978) and Watching You Watching Me (1985).

After the latter failed to chart, Withers went into early retirement. The 2009 documentary Still Bill explored his reasons for quitting the music industry and painted a picture of a fulfilled musician and human being. Writing in the Chicago Sun-Times, the film critic Roger Ebert said Withers “still lives and survives as a happy man. Still Bill is about a man who topped the charts, walked away from it all in 1985 and is pleased that he did.” – Guardian