Krzysztof Penderecki had a remarkable career, but was most proud of his arboretum 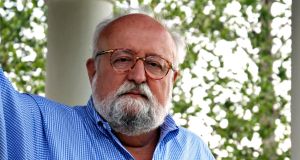 Krzysztof Penderecki, who has died in Kraków, Poland on Sunday aged 86

Polish composer Krzysztof Penderecki, who has died at the age of 86, had a remarkable career. In the early years of his creative life he worked behind the Iron Curtain, where recent developments in Western music were officially frowned upon. But the Warsaw Autumn festival, which was founded in 1956, set Poland apart from other communist countries, and it became a melting pot in which East could meet West with a freedom that was not to be found anywhere else.

Penderecki’s international breakthrough, his angst-ridden Threnody for the Victims of Hiroshima for 52 strings of 1960, expresses itself through sonorous masses of string tone, sometimes marshalled as though through a kind of musical finger-painting, sometimes generated with the intricate filigree of an etching. Think of edgy electronic music re-conceived for a large string orchestra, itself re-conceived as a gathering of solo instruments rather than a conventionally structured string group.

The Threnody is a piece that employs the high-order avant-garde techniques of the time. The score includes a page to explain the meanings of the notation used to indicate the playing of quarter tones, notes with indefinite pitch, or the use of the bow in unorthodox ways. It often introduces graphic elements to complement conventional notation. It’s exactly the kind of piece that would be expected to alienate conservative listeners. Yet it also carries an emotional punch that is well-nigh irresistible. You could almost say that it’s like a virus that’s leapt species. It invades without your having any say in the matter.

So it can hardly be a surprise that the director Stanley Kubrick turned to Penderecki to write the score for his 1980 horror film, The Shining. Penderecki declined – he was concerned about the possible success and money sidelining his other work – but he discussed the film with Kubrick and made suggestions about which of his works might usefully contribute to the threatening world of the film’s Overlook Hotel.

Penderecki’s St Luke Passion of 1966 married his world of unconventional sonorities to a religious text – a real act of rebellion in the Poland of the time. It presaged a lifelong commitment to composing religious music — his Te Deum of 1980 is dedicated to Pope John Paul II — which accounts for a significant proportion of his output.

His first Irish appearance was with the Ulster Orchestra in 2000, when the main work was his Third Symphony

Like many of the major figures in the postwar avant garde, Penderecki mellowed with time, and in his case the change of direction was epitomised in the luxuriant, late-romantic indulgence of the Violin Concerto which was premiered by Isaac Stern in 1977. Penderecki studied the violin, and in his youth had aspirations to become a virtuoso on the instrument. What the often opulent-sounding, large-scale works he has written since have in common with his earlier output is his interest in gut-stirring effects.

Penderecki was a conductor, too. His first Irish appearance was with the Ulster Orchestra in 2000, when the main work was his Third Symphony, in which he galvanised the orchestra into a kind of imposing grandeur and sonorous fullness that I had never heard from them before.

I had the pleasure of interviewing him in his spacious house in the exclusive Kraków suburb of Wola Justowska 10 years ago. The occasion was a concert by Camerata Ireland, whose conductor, the pianist Barry Douglas, is a big fan. Douglas had recorded his Piano Concerto (Resurrection) for Naxos earlier that year, and is a powerful advocate for the composer’s Sextet for clarinet, horn, violin, viola, cello and piano.

Penderecki was a most gracious host, and seemed to delight in having me eat confectionery that was prohibited to him on health grounds.

I recall him telling me how he felt that the late 1950s were such an incredible time in Poland. “I think never in Polish history did culture develop so much as in the time of the operation of the Soviets.”

He asked about the state of the Catholic Church in Ireland in the wake of the stories of child sex abuse that had been resonating around the world. He was clearly saddened but not surprised by the redefinition of the place of the church in Irish society. And he was clearly anxious to soak up the kind of on-the-ground detail that he wouldn’t get from media reporting in Poland. There have been clerical convictions from the parish I grew up in, the secondary school I attended, and the nearest Christian Brothers school to my childhood home.

The arboretum had, he told me, more than 1,700 species, a selection unrivalled in Eastern Europe

I asked him in turn about the situation in Poland. The issues were all the same, he said sadly, just not yet out in the public domain and being dealt with in Poland the way they had been in Ireland. I found that easy to understand. On my walk from the train station to the hotel I stayed in, I passed a surprising number nuns and priests, and saw how they were treated with an automatic depth of deference that had long ago faded in Ireland.

The most surprising revelation from meeting Penderecki is exactly the same now as it was 10 years ago. I asked him about which of his life’s achievements had given him the greatest pleasure. And his answer was not about music. It was about his arboretum in Luslawice in southern Poland.

It had, he told me, more than 1,700 species, a selection unrivalled in Eastern Europe, and difficult to achieve because of the harsh winters. The arboretum, he said, “also has form, like an open, unfinished symphony. Really, to plan the park you need more than one generation. Usually it was two or three generations. I did it myself in 40 years.”

Last year he arranged for it to be transferred to state ownership. So, in addition to his musical legacy (which extends beyond his compositions to a music centre with a concert hall, rehearsal spaces and a recording studio), he will always have an ever-changing organic legacy in the arboretum he so lovingly created in his spare time.