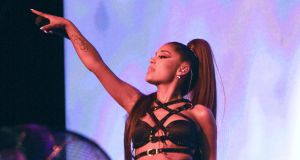 ‘Let’s not be afraid, Manchester’: Ariana Grande on stage on Sunday. Photograph: Kevin Mazur/Getty for AG

The last time Ariana Grande performed in Manchester, in the harrowing days after the blast that killed 22 people and injured hundreds more at one of her concerts there, her tribute show began with a minute’s silence and the words: “Let’s not be afraid, Manchester.”

She returned to the city in sparkling style on Sunday night, dazzling through a party playlist as she pledged her undying love to a place that has made her its own since the attack on May 22nd, 2017.

The 26-year-old Floridian, who was made an honorary citizen of Manchester following the tragedy, returned for the first time in two years to headline its biggest ever Pride celebrations.

There was, unsurprisingly, no explicit reference to the terror attack, but, shaking with nerves, Grande did speak about her special connection to the city. “I love Manchester so much. Thank you so much for having me back,” she said, to cheers.

Love will always win and @ArianaGrande is boldly back, sticking two fingers up to hate!!!! https://t.co/vQFYyGkOji

“I’m so happy to be here with you – it means the world – so thank you for having me. I’m sorry, I’m so nervous, I had so much more to say, but I’m, like, very overwhelmed, so thank you. It’s so beautiful, I love you so much.”

Thousands of brightly dressed fans had crammed into Mayfield depot, a train station turned rave hot spot, to see Grande perform less than 2km from Manchester Arena, the scene of the attack.

They danced and gyrated through most of Grande’s superspeedy 30-minute set, which was packed with hits, including Thank U, Next and 7 Rings. The show ended with an emotional singalong to One Last Time, a song that was rereleased as a charity single after the arena bombing.

Figen Murray, the mother of Martyn Hett, one of the 22 killed in the blast, said Grande’s return would “bring about a lot of healing” for the bereaved families. She tweeted: “Love will always win and Ariana Grande is boldly back, sticking two fingers up to hate!!!!”

Waving a rainbow-coloured flag, Grande told the crowd she was “so happy” to share in the celebrations. “I spent some of the happiest times in my teenage years singing in gay bars in New York City,” she said. “It’s always been such a special thing for me, so thank you so much for accepting and celebrating me and letting me celebrate you guys.”

Carl Austin-Behan, Manchester’s former lord mayor, said it was important for the city and its LGBT community that Grande headlined Pride. “I think it’s important that she has come back. Obviously it was an awful time then, but to do something for the gay community, it sends a clear message how supportive she is but also how resilient we as a city are as well.”

Armed police patrolled the fringes of the festival amid extra tight security inside but that did not deter the party atmosphere. “The scale of it and the vibe is off the scale,” said one fan, Nathaniel Thornton, who was wearing a rainbow-coloured costume.“After the bombings we came to Manchester the following day, when we had the vigils. This year we would’ve come anyway, but the fact Ariana is here amplifies it. Kudos to her.” – Guardian

Where did it all go wrong for Johnny Depp?
8

The pros and cons of being a writer
10