The British pop savants on #MeToo, friendship and overcoming stereotypes 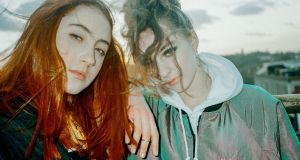 Life is one big rollercoaster ride right now for Rosa Walton and Jenny Hollingworth, aka wonky pop savants Let’s Eat Grandma. Woozy, dramatic, just weird enough to nudge you out of your comfort zone, the duo have been universally acclaimed as among British indiedoms’s most entrancing newcomers.

Kate Bush, Aphex Twin and 1980s one-hit wonder Tiffany are some of the comparisons flowing their way (this is called covering all the bases). Q Magazine put its cards on the table by declaring 2018’s I’m All Ears the year’s second best album, behind Arctic Monkeys.

But with the praise has come a worrying tendency in the media to pigeonhole these 20 year-old friends from East Anglia as terrifying rural oddballs straight out of the Wicker Man or League of Gentlemen. Oh and flagrant sexism. That’s been a thing too.

“I don’t think we’ve had anyone creepy on this tour and that’s the main thing,” says Walton. “[But] especially when we were younger . . .” chimes in Hollingworth. “That’s even more disturbing. When we would really get it was when we were 15. That’s really weird. They’re preying on people who are really vulnerable.”

The subject at hand is the music industry’s perpetual struggle to treat women with respect and equality. It’s a talking point in light of the #MeToo movement. The ongoing puzzle is that, though #MeToo has roared like a righteous wildfire through Hollywood, in music it’s hardly caused a spark.

There was the Ryan Adams scandal, where a succession of women came forward with accounts of predatory, manipulative (and worse) behaviour. That is more or less it. Let’s Eat Grandma, whose single Hot Pink is about a controlling relationship, are at a loss as to why this is the case. We should be hearing more.

“It doesn’t surprise me at all,” says Hollingworth of the Adams controversy. “I don’t know that much about him. I know what the industry is like. Music has been even slower to have it all exposed than the acting world. It’s taking even longer.”

The major offenders, in their case, weren’t moguls or other musicians. It was a tiny, yet nonetheless in the past very visible, segment of their supposed fanbase.

“Just, like, people at merch,” says Walton of these unpleasant encounters (she adds that the overwhelming majority of men they work with have been completely supportive and respectful). “We used to go to the merch after the shows . . .”

“Weirdly especially when we were younger . . . It’s quite easy to access young girls who are looking for opportunities in the music industry,” continues Hollingworth.

“If the men have the power . . . they are the ones that have the control over whether you get to do stuff or not. When you are playing gigs you are quite accessible to whoever is coming to the gig afterwards.”

Less skin-scrawling, but nonetheless infuriating, is the suspicion that Let’s Eat Grandma are merely a front. Lurking behind the scenes, Max Martin-style, it is often assumed, are the real – i.e. male – songwriters and musicians.

“That’s the thing that gets me the most,” says Hollingworth. “Some people are like, ‘you couldn’t have possibly written this stuff. It must have been somebody else who played all the instruments’. And the music is so written from the [perspective] of young women.”

The “scary” stereotype meanwhile surely flows from the tendency in popular culture to portray a certain sort of intense female friendship as inherently unhealthy. It’s there in Peter Jackson’s Heavenly Creatures and Pawel Pawlikowski’s My Summer of Love. And, in a roundabout fashion, in Kubrick’s The Shining, with its nightmare twins.

There were certainly plenty of Shining comparisons starting out. To a degree Let’s Eat Grandma brought it on themselves. Walton and Hollingworth went out of their way to encourage the perception that they were twins. Dressing alike and sporting matching shoulder-length hair, they duly frightened the bejaysus out of everyone.

“We don’t look that similar anymore,” says Walton. “But we used to. People find doubles unnerving.”

A memorable example is the video to single Eat Shiitake Mushrooms, from their 2016 debut LP I, Gemini. As strobes flash they dance with their hair in the faces, like Sadako the Angry Ghost from the Ring movies. Later, they cycle around a field looking vaguely fed-up. It’s terrifying.

“We kind of created that image for ourselves a little bit,” says Hollingworth. “There was a lot of humour in the first album. I think it went over people’s heads. We’ve always been a band that likes to have a bit of fun.”

Let’s Eat Grandma have existed in one shape or another for about five years. In their mid teens, Hollingworth and Walton began mucking around with keyboards and laptops. Initially they would cover other people’s songs. When that became boring – which it did, rather quickly – they had a go at writing their own.

They were soon regulars on the Norwich indie scene, which is obviously small but also very supportive and well connected. That put them on the radar of Transgressive, the London label that has introduced audiences to such diverse talents as Songhoy Blues, Julia Jacklin and Marika Hackman.

Walton and Hollingworth have never had much trouble drawing attention to themselves. Yet, as they explain, the cliche took hold early on that they were a matching set of bonkers besties from the sticks.

One magazine hailed Let’s Eat Grandma “a teenage witch duo” and meant it as a compliment. Pitchfork described them as “wonderfully weird”. Only with I’m All Ears, part-produced by Faris Badwan from The Horrors and Lady Gaga collaborator Sophie Xeon, did that stereotype begin to evaporate. As well it should. The record is a straight-up pop onslaught where the rural gothic overtones have been locked in a giant straw effigy and set ablaze.

“The music is from the perspective of young women or people in their late teens,” says Hollingworth. “We do write songs about meaningful topics as well.

“But the main thing is about having a good time. People kind of missed that. They thought we were a really serious, pretentious band or something. Obviously we’re going to write songs about being young women. That’s who we are.”

They capture the white heat of teenage friendship with a veracity that borders on unsettling. Consider single “It’s Not Just Me”. At one level it’s a big, soppy group hug in pop form. Yet it speaks, too, to that sense, rarely articulated but universal, of feeling completely alone only for a pal to walk up and tell you that they have your back.

All that and it also reads like an unofficial anthem for Let’s Eat Grandma themselves. Walton and Hollingworth, who have known each other since age four, are friends first. No matter what happens in their adventures in music, they are determined for it to always stay that way.

“We are colleagues lol,” says Rosa. “Friendship always comes first, before any band stuff. We’ve spent so much time together inside the band and outside. You’re always going to have disagreements.”

Summer has been a blur of festivals. Let’s Eat Grandma kicked off last April at Coachella in sunbaked southern California. That concert unfolded in the shadow of the tragic death from cancer of Hollingworth’s boyfriend (they went ahead with the booking as a tribute to him). Now the curtain comes down in the moderately less sunbaked Irish Midlands and a date at Electric Picnic. They expect the crowd to be more of a mix than at their own shows.

“It’s funny – when we started we had an older audience,” says Hollingworth. “With our new album it got younger. We’re used to playing to all sorts. Young people dance a lot. Older people can afford to buy vinyl. There are benefits to both.”