All Together Now vows to avoid mistakes for 2020 festival

This month’s event criticised for traffic, communication and waste problems 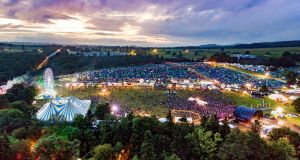 All Together Now, at the Curraghmore Estate, in Co Waterford. Photograph: Aerial.ie

All Together Now will return in 2020 – and has promised that it won’t get any larger in an attempt to avoid the problems that plagued this year’s music festival.

Although gig-goers praised All Together Now’s line-up and atmosphere, some reported sitting in nine-hour traffic jams as they tried to reach the festival site, at Curraghmore Estate, in Co Waterford, over the August bank holiday weekend. Campsite overcrowding and poor waste management were other main talking points after the festival, which was headlined by The National, Patti Smith, Father John Misty and Hot Chip.

The event’s organisers said today they were “deeply disappointed” and “truly sorry” that “some areas of this year’s All Together Now fell short of expectations” and were “absolutely and fully committed” to avoiding the problems at next year’s festival, which will run from July 31st until August 2nd.

They also said they will keep festival capacity at 22,500, its 2019 level, in an effort to “improve the overall experience for our loyal audience”. That was a 50 per cent increase compared with the first All Together Now, in 2018, which had a capacity of 15,000. Gig-goers told The Irish Times this month that they believed the organisers had increased the size of the festival without solving teething problems to do with traffic, communication and waste.

Organisers also kept tickets for the 2020 festival at 2019 rates when they went on sale this morning, with loyalty and members’ presale prices ranging from €179.50 to €208.

Casting a Jesus or George Washington? Only Tom Hanks will do
4

Thomas Markle: My Story – ‘It’s time to look after Daddy’
5