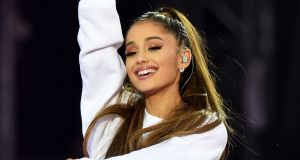 Councillors in Manchester have voted unanimously to make Ariana Grande an honorary citizen of the city, following the terror attack at the singer’s Manchester Arena concert in which 22 people died.

Family members of some of the victims of the bombing were at Manchester Town Hall for the council meeting on Wednesday morning.

The council also voted on Wednesday to hold civic receptions for those who helped with the response to the attack and to propose a new awards scheme to recognise outstanding contributions to the city.

Suicide bomber Salman Abedi (22) carried out the attack on May 22nd after the concert by the US pop star.

Council leader Richard Leese put forward the motion and described the 23-year-old singer as “a young American woman for whom it would have been understandable if she never wanted to see this place again”.

He said that, instead, she “brought comfort to thousands and raised millions for the We Love Manchester emergency fund” by returning to the city to perform in June after organising the One Love Manchester benefit concert.

The meeting heard from several guest speakers who had been involved in the response.

Assistant chief constable Vanessa Jardine described the role of officers in both the initial response to the incident and in the investigation.

She said: “The outpouring of public support was both tangible and uplifting across the city.”

Lorraine Hulme, a ward sister at Wythenshawe Hospital who was on duty on the night of the atrocity, told the meeting: “I feel extremely proud to be part of such an outstanding team and I know the same can be said for all hospitals and their staff involved across the region.”

Council officer Mark Rainey was visibly emotional as he described his role in co-ordinating the authority’s response to the attack.

Describing the mood of the city, he said: “It was very clear that we felt pain and sadness, but we stood tall, stronger and defiant.

“We wanted to do anything we could to help the people and families who had been affected.”

The meeting included a performance by the Halle String Quartet, who played Oasis’s Don’t Look Back In Anger.

Lord mayor Eddy Newman said the song had become an “anthem for the way the city and the people of Manchester have remained strong and committed to peace and justice in defiance of the act of evil that was committed at the arena”.

He told the family members at the meeting: “You are forever in the hearts of Manchester and its people.”

Leaders of different faiths from across the city said prayers at the start of the meeting and the names of the 22 victims, including seven children, were read out before a minute’s silence.