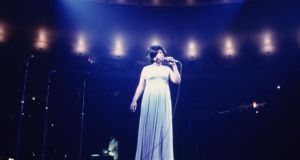 1. I Say a Little Prayer
Months after Dionne Warwick released the original recording of Burt Bacharach’s tune in 1967, Aretha blew it out the water with her gutsy cover. It’s now the definitive version that’s endured the decades, and gave rise to that scene in My Best Friend’s Wedding.

2. Respect
Nowhere are Aretha’s fiery vocals more distinctive than in Respect. Injecting Otis Redding’s original with renewed vigour, she flipped a sharp-sounding soul song into a feminist warcry that earned the first of many number ones and Grammy Awards. “Sock it to me” her backing singers refrained, and that she did.

3. Rolling in the Deep
Aretha’s gift for re-crafting already-famous songs continued into her later years, as proved by her 2014 covers album Aretha Franklin Sings the Great Diva Classics. With Adele’s Rolling in the Deep, recorded after her health problems began, what she lost in strength she evidentially gained in depth.

4. (You Make Me Feel Like) A Natural Woman
With Aretha’s sisters Carolyn and Erma, Whitney Houston’s mother Cissy and Dionne Warwick’s mother Lee on backing vocals, what started off as a love song became a powerful ode to sensuality usually given an airing once the candles are lit. It’s so evocative that since its 1967 release, it’s been covered by Bonnie Tyler, Mary J Blige and far too many X Factor contestants.

6. Chain of Fools
It was also featured in The Commitments, but nothing can match Aretha’s original soulful sounds on her fifth hit single of 1967. Just listen to her life-laden vocals when she breaks it down, with only handclaps to keep the beat.

7. Baby, I Love You
In the 1960s when “I love you” was the most overused thought of the charts, Aretha injected it with meaning once again, with this lusty track that’s heavy with Southern drawl.

8. Think
Think was an instant hit when released in 1968, and later gave Aretha her cameo in The Blues Brothers. Written by Aretha and her then-husband Teddy White, it declares “freedom” from a troubled relationship, all the more poignant as they divorced a year later.

9. Sisters Are Doin’ It for Themselves
Joining forces with The Eurythmics, this rabble-rouser is explicit in its intention: “This is a song to celebrate/The conscious liberation of the female state,” proclaim Annie Lennox and Aretha. Sung by two of this generation’s greatest, it’s a force of nature.

10. I Knew You Were Waiting for Me
Another eighties collaboration, George Michael and Aretha showed how to duet in style with this cinematic tune. Such a celebratory song is difficult to enjoy with the loss of both its stars, but at the very least, it speaks of the legacy left by George and now, the late, great Aretha.