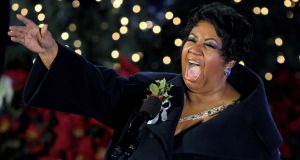 Soul singer Aretha Franklin has died at her home in Detroit, her publicist said on Thursday.

She died “surrounded by family and loved ones” at 9.50am on Thursday, according to her representative Gwendolyn Quinn, who added that the singer had been suffering from advanced pancreatic cancer.

A family statement said: “In one of the darkest moments of our lives, we are not able to find the appropriate words to express the pain in our heart. We have lost the matriarch and rock of our family.

“We have been deeply touched by the incredible outpouring of love and support we have received from close friends, supporters and fans all around the world.

“Thank you for your compassion and prayers. We have felt your love for Aretha and it brings us comfort to know that her legacy will live on”

Yesterday, people were praying for the ailing Franklin in the Detroit church where her father was once a pastor.

The special vigil for the singer began at New Bethel Baptist Church before dawn.

The prayers came one day after Stevie Wonder visited the Queen of Soul at her home.

The 76-year-old, who sang with matchless style on such classics as Think and her signature song, Respect, cancelled planned concerts earlier this year after she was ordered by her doctor to stay off the road and rest.

Funeral arrangements will be announced in the coming days.

Tributes have been paid to Franklin by her musical peers.

Mick Jagger said in a statement: “Very sad to hear the news about Aretha, she was so inspiring and wherever you were she always brought you to church.”

Elton John, who was present for Franklin’s last ever performance, called her death a “blow for everybody who loves real music: music from the heart, the soul and the church.

“I adored her and worshipped her talent. God bless her.

“We shared the same birthday — and that meant so much to me. The whole world will miss her but will always rejoice in her remarkable legacy. The Queen is dead. Long live the Queen.”

Ringo Starr tweeted: “God bless Aretha Franklin the queen of soul and peace and love to her family.”

Bette Midler mourned the loss of “the greatest voice in America popular music”.

US president Donald Trump tweeted: “The Queen of Soul, Aretha Franklin, is dead. She was a great woman, with a wonderful gift from God, her voice. She will be missed!”