Urination once again: when will music festivals achieve peeing equality?

They’re now a meeting point for all sections of society, trying to give all things to all people 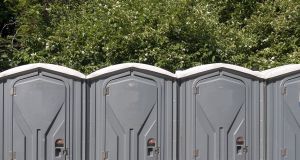 Women never enjoy the same liberties as men having their lost weekends, running around the fields peeing everywhere and generally behaving like they’re back in senior infants but this time with booze.

There will always be those who like to complain about the modern festival, that it literally “used to be all fields around here” those who bemoan the fact that it’s now more about branding, “man”. These are the kind who fondly reminisce about the days when tepid cider was a lifestyle choice and the only culinary decisions to be made were whether to purchase a suspect Spice/Whirly Burger from a rusty van. They are the people whose eyes mist over when they share anecdotes about the time a passing crustie got sick in their hair during Ned’s Atomic Dustbin. Do not listen to these fools. The festivals of yore were not the counterculture utopia they proposed to be. They didn’t even have an on-site Gala shop for one thing, the savages. Back then festivals were enmeshed with anti-establishment ideals where the lineup was usually assembled from agitprop bands screaming through a battered PA while a ruddy-faced volunteer tried to make you sign up for a Greenpeace campaign involving radioactive waste. Festivals were anarchic and lawless, where a bin was always on fire in the background. They were a fun weekend for left-leaning students before they grew their hair out and knuckled down for their final year.

Through the televised gentrification of Glastonbury, the idea of the “music festival” was then beamed into the eyes and souls of a bigger demographic, those who grew up on SMTV not MTV and Sash instead of The Clash. With everyone wanting to have their jollies in the outdoors, the festival has now become a cliched rite of passage. This month a movie from the creators of The Inbetweeners (ingeniously entitled The Festival) hits the cineplex, making the average weekend in a field look like an horrific mix of Confessions of a Window Cleaner and Spud’s entire Trainspotting storyline with extra added face-painting and incontinence jokes. Even the last Bridget Jones film had a whole segment given over to the hilarious japes the eternal singleton had at one of these outdoor events, falling into a pile of mud with her wheelie suitcase (Arf!) and almost crushing Ed Sheeran into a pasty pulp whilst zorbing. It feels like everyone is “festivalling”.

There is no rebellious cool cache to be had from heading to a festival anymore, everyone has done it from your very normal auntie to our Avicii-loving Taoiseach. There has been a broadening of the spectrum, meaning the title “festival” can be applied to almost any event that utilises a giant tent. It’s no longer the illusion of hippy babes baring their breasts at Woodstock or glo-painted ravers at Creamfields – a festival can be Alex James proffering up some Stinking Bishop to jelly-faced David Cameron at a cosy middle-class fete, or watching two ex-members of the Sugababes stumble through the hits at a racetrack, or three days in a glorified carpark listening to a jazz-funk collective before you jump back on the bus home to the comfort of your own bed.

There is nothing wrong with this mutation, of giving audiences the gift of choice. There is something truly egalitarian about the way big festivals have now become a meeting point for all sections of society, trying to give all things to all people. You can have your seaweed and kale wrap in the soft afternoon light watching Villagers or you can guzzle down some rosé and scream your lungs out at B*witched before everyone comes together to awkwardly rap into Kendrick Lamar’s bemused face. You can enjoy your artisan coffee down in the Wooden Shack of Self-Righteousness, but you can also stay in the campsite lounging around on Lidl garden furniture working your way through a bin bag full of cans. Fill your Penneys boots.

Even though festivals have leapt into the modern age with an abundance of oxygen bars, fancy drinks and yurts with memory foam mattresses, they are still back in the desperate dog-on-a-string days when it comes to feminine hygiene. The final taboo of festivals, what will make them an equal playing field for everyone, is to give women the freedom to urinate as much as men. Women never enjoy the same liberties as men having their lost weekends, running around the fields peeing everywhere and generally behaving like they’re back in senior infants but this time with booze. Women worry about the act of using She-Pees or bring a Lenor bottle for their tent. They are instructed to bring five more extra pairs of tights than is necessary. They know to have their fake nails secured in the event that one comes a cropper in the portaloo during a sensitive moment and, when they choose to wear a playsuit, they are always accompanied to the loos by a nimble-fingered friend.

Shrewdly enough, the only section of the festival industry that truly caters to women is the one that has been ruthless commercialised – the fashion world. Festivals have gone from hairy LSD-addled goons covering their modesty with a dusty poncho (or not) to the unisex days of the 90s where everyone wore band t-shirts and Doc Martens to the veritable catwalk they are today. Whereas most blokes can get away with entombing themselves in their puke encrusted GAA jerseys and straw stetsons for the entire duration of the weekend, festivals are a more challenging sartorial affair for women. There are now entire sections of women’s magazines and online articles devoted to “festival wear”, “festival hair”, “festival makeup”, which seems like another way to bestow more pressure and anxiety on young girls to be picture perfect when negotiating uneven muddy fields in the darkness, full of frazzled, inebriated, casualties.

Most critics blame the high priestess of festival-flair, Kate Moss who has sashayed around Glastonbury in an array of diaphanous mini-dresses and bum-slicing hot pants since the early noughties and while it is true that we can’t all have a look inspired by David Bowie sweeping through the thicket dressed in a velvet kabuki outfit, the real culprit is Coachella. The most Insta-worthy of festivals, it’s a parade of celebrity peacocks pushing their new relationships into the cameras along with their abundant freebies, snapping basic selfies as Beyonce casually performs the gig of her career. It’s where a Jenner girl or one of Lionel Richie’s offspring can knock back designer water and don string bikinis held together by sheer force of pout, but these ultra-rich kids have access to backstage luxury and fancy fur-lined winnebagos not to mention the arid-dry conditions of the desert-based festival to keep them warm. Pity the unfortunate girls replicating this look queuing for a kebab at 2am, whilst their skin turns a cornflower blue in the torrential rain. The Irish weather is never usually a friend to the glamorous.

Even with all their modern bells and whistles and Mam-friendly line-ups, festivals are still the fortress of the young, where they gain the kind of survival skills that Bear Grylls can’t teach. They can be a joyous, liberating occasion, somewhere to wear everything you bought from Pretty Little Thing altogether at once, a place where the purpose of a bum-bag is finally realised but also where you learn the importance of wet wipes. The modern festival is about inclusivity and solidarity where friendships bloom under plastic flower crowns and over upturned noodle cartons. A place where the meek and the brave share misfortunes, where hilarious horror stories are born that you can bore everyone with forever more, telling goggle-eyed future festival attendants that once upon a time it was all burrito stands and glitter body paint – oh and some music too.