Aretha Franklin: When she sang, nothing else mattered

Mick Heaney: Her impact went far beyond music – she changed the world around her 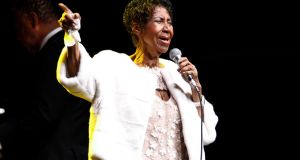 Named the “Queen of Soul” in a mock coronation on a Chicago stage in 1967, Aretha Franklin – who has died aged 76 – reigned majestically until her death, transforming her showbiz sobriquet into something akin to an indisputable statement of fact.

But even that regal title undersells her immense achievement. Franklin was one of the greatest singers of the 20th century, one whose impact was felt far beyond the world of soul music, and even popular song: she changed the entire culture around her.

When she was at her peak, which was often, her voice wasn’t just a transcendental musical instrument, it almost took on a life of its own, by turns spiritual mentor, vivacious friend and intimate companion.

Author Peter Guralnick was clear about Franklin’s greatness in his landmark 1986 book Sweet Soul Music. “There has been no pop singer more inspired than Aretha when it comes to sheer vocal artistry,” he wrote, adding that when she hit her stride, “there was nothing to which her performance could be compared.”

But her influence went beyond the artistic. Just as her classic material of the 1960s echoed the defiant pride of the civil rights movement, so her life tracked the trauma and triumph of Black America. It was no coincidence that she sang at Martin Luther King’s funeral in 1968, and performed at Barack Obama’s presidential inauguration in 2009.

Born in 1942, the daughter of a famed preacher, C.L. Franklin, Aretha was brought up in a church family in Detroit where the ecstatic hope of Gospel singing went hand in hand with sermons denouncing racial inequality. (King was a family friend.) Franklin would merge this vibrant music heritage with the rising confidence of the African-American community to forge her own astounding legacy.

But her success was, to quote her fellow Gospel-turned-soul-singer Sam Cooke, a long time coming. Though Aretha’s gifts were evident enough for her to be signed by CBS records at age 18, she spent the first half of the 1960s turning out rather staid jazz and show tunes. It was only when she moved to Atlantic Records and started recording at the legendary Muscle Shoals studios in Alabama that her creative and commercial potential was fulfilled.

Respect, the opening track of her 1967 debut album for Atlantic, set out her stall in explosive fashion. In her hands, the song was a clarion call for both sexual and racial equality, with the vocalist unapologetic in her demands, exuberant in her delivery and heartfelt in her emotion. (Soul singer Otis Redding, who composed Respect, ceased performing it himself after hearing Aretha’s version. “I just lost my song,” he said.)

Over the next few years, Franklin seared herself into America’s cultural consciousness with a succession of scorching recordings that upended convention while enthralling listeners. Like so many Gospel singers who crossed over to the secular world, she was unabashed in singing about more worldly pleasures. But unlike, say, Sam Cooke, there was no trace of guilt as she sang a sensual composition such as (You Make Me Feel Like) A Natural Woman.

Similarly, when she addressed the opposite sex about their cavalier treatment (or worse) of women, there was none of the remorseful subservience that marked so many of the era’s pop numbers on the subject. The ringing chorus of Save Me was more like a challenge than a plea. Meanwhile Do Right Woman, Do Right Man featured a smouldering Aretha urging her partner to respect her as an equal.

Then there was Think, on which she practically dared her man to leave her, envisioning the bright future that might lie ahead. The song’s unforgettable chorus consists of one word, and Franklin’s voice soars as she sings it: “Freedom.” The parallels with the African-American community’s suffering didn’t need to be spelled out to her black audience.

That such songs were also chart hits suggested that mainstream white listeners were getting the message too.

A bitter irony lay behind such self-assured performances, however. Franklin’s personal life was laced with pain, insecurity and physical abuse. Despite her father’s respected public profile, he was a philandering drinker: Aretha’s mother left him when her daughter was only six. While still in her early teens, Aretha gave birth to two children, then aged 19 married the shady and abusive Ted White, only divorcing him in 1969.

Given this, it was perhaps unsurprising that Franklin could occasionally be prickly and suspicious. She was wary about being financially fleeced, the fate that befell so many African-American singers, so she insisted on being paid in cash before going on stage, right until her final years.

For such a public star, she was protective of her privacy. When David Ritz, the respected music author who ghostwrote her reticent 1999 autobiography, published a revealing though still respectful unauthorised biography in 2014, Aretha denounced the book as “trashy” and “lies”.

But when she sang, none of this mattered, neither for her fans nor, one suspects, for Aretha herself. The material she produced up until the mid-1970s stands as some of the most astonishing recorded music of all time. There were soulful classics such as Chain of Fools and I Say A Little Prayer, as well as funkily righteous albums like Young, Gifted and Black.

Above all, there was Franklin’s return to her spiritual roots, the wondrously feverish 1972 double album Amazing Grace, which gave credence to her father’s opinion that Aretha was always a Gospel singer at heart.

Her later output was more uneven, as indeed were her comparatively rare performances, with her ability to tour hobbled by a chronic fear of flying. Yet her formidable gifts remained. If the cold production techniques of 1980s didn’t naturally suit her voice, Franklin still effortlessly overshadowed electro-pop diva Annie Lennox in their hit duet Sisters Are Doing It For Themselves, while updating the proto-feminist sentiments of her pioneering hits.

As late as 2014, she showed she still could deliver memorable performances with her album Aretha Franklin Sings the Great Diva Classics, on which she put her inimitable stamp on cover versions of hits by Adele, Gloria Gaynor and Sinead O’Connor. It was a reminder to any would-be pretenders that there was only one Queen.

So woven into popular culture was Aretha that it was easy to forget the scope of what she achieved, but her death throws her musical feats back into focus. Bringing together artistry, passion and her family heritage, she created music that spoke to the listener personally while chiming with the wider changes of society.

Aretha has left the stage, but such is her legacy that it’s hard to see anyone else ever claiming her crown.