Madonna at 60: a career of highlights and controversies 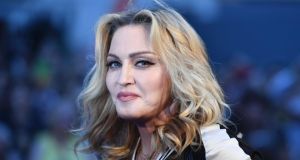 Madonna: ‘I think the most controversial thing I have ever done is to stick around’ Photograph: Ben Stansall/AFP/Getty

“People say I’m controversial,” Madonna, who turns 60 on Wednesday, told an audience of music-industry peers in 2016. “But I think the most controversial thing I have ever done is to stick around.”

From a career spanning decades, these are just a few of her most inconic, her most controversial and her most inventive moments.

Sexism was the demon that haunted Madonna’s early career, but for two decades – maybe longer – it’s had an equally unwelcome sibling: ageism.

Madonna was a pioneer of welding her voice to her image, and in a culture consumed with critiquing how women look, and controlling how they use their bodies, she’s been on the front lines, a seductress and a battering ram. But as she’s continued to be a force while she deigns to grow older, she’s faced a new frontier of abuse. There has never been a pop star writing and performing at her level, and demanding a seat at the table, at her age. Why wouldn’t Madonna demand it?

One of the great conundrums of the internet era is pop culture’s short memory; the receipts are right there to be found, yet few bother to do the looking. But yes, in a career spanning four decades, Madonna made real cultural change, and caused a few cultural crises, over and over again. For all the criticism she’s weathered during four decades in the spotlight, she deserves a birthday celebration. – Caryn Ganz

The wedding dress is sexy

If Madonna has been perpetually unapologetic (see: Human Nature, Unapologetic Bitch), it is partly because she ignited so much controversy at the beginning of her career by barely striking a match. Basically, she wore a wedding dress, while singing about the joys of sex, on a song called Like a Virgin.

She rolled around in the wedding dress while performing that song live on MTV. And the wedding dress wasn’t really your typical wedding dress, but a lace corset cinched by a belt that said “Boy Toy” on the buckle. And underneath she wore a white garter belt that was seen by a hefty percentage of America. – Jacob Bernstein

When Madonna posed fully, frontally naked for Sex, her widely derided 1992 coffee table book, the shocking part wasn’t the nudity. It was the point of view: She subverted the viewer’s leering gaze by putting the focus squarely on her defiant character. The purity of Madonna’s vision, evident in every inch of the photo, defied any pornographic projection.

There she stood, in a pose worthy of the most flagrant John Waters character with cigarette dangling from a sneering mouth, as she stuck out a finger to hitchhike on an open highway. Every possible danger sign was invoked and inverted, staring down all forces that could contain her freedom.

Other major female pop singers had done partial nudes before, including Joni Mitchell for the inside sleeve of her For the Roses album (shot from behind and at a significant distance) and Janis Joplin (with a tangle of necklaces covering much of her breasts, and her hands protecting what lies below). Yet both those images suggested degrees of innocence. Madonna’s closest precursor was Grace Slick, who mugged sardonically for several impromptu topless shots in the early 1970s. But those images established Slick’s power through her absurdist humour.

In the Sex shot, Madonna used her body with as much animalistic force as her fellow Detroit rocker Iggy Pop. Her pose turned inside out the way sex is commonly used in pop culture nudes, expressing not a sexual lure but the power of personal confidence. – Jim Farber

MTV declined to play her steamy Justify My Love video, so Madonna did the next best thing: released it on home video as a “video single.” The cost: $9.98 (€8.77). – Caryn Ganz

“Art should be controversial, and that’s all there is to it,” Madonna said to the New York Times in 1989, discussing her Like a Prayer video. The song initially had its premiere as part of a Pepsi TV ad, and Madonna released the full music video the next day. Sharing only an African-American gospel group in common with the commercial, the five-minute video showed Madonna running into a church after she witnessed a group of white men assaulting a white woman, having a spiritual and sexual orgasm in the church’s pulpit, and coming forward to testify on behalf of the African-American man who was wrongfully arrested and incarcerated for the crime.

The video ignited protests over its religious imagery, especially her stigmata scene, the statue of a black saint and the burning crosses. The director Mary Lambert later reflected, “I knew that we were pushing some big buttons, but I sort of underestimated the influence and bigotry of fundamentalist religion and racism in this country and the world.” Under the threat of boycott, Pepsi capitulated by dropping the $5 million (€4.3 million) ad campaign and its sponsorship of her world concert tour.

Madonna was applauded by some for breaking racial and religious taboos, but the video also initiated a critique that not only haunts much of her later work and life, but also heralded public debates about the abuse and misuse of African-American cultural identities by white artists. Remarking on the video in 1992, the feminist critic Bell Hooks wrote, “Fascinated yet envious of black style, Madonna appropriates black culture in ways that mock and undermine, making her presentation one that upstages.”

Looking back, Like a Prayer did not simply announce Madonna as our cultural provocateur, but as an iconic cultural appropriator as well. – Salamishah Tillet

Vogue, from ballroom to living room

Madonna wasn’t the first pop star to plunder the grace and hauteur of vogue balls. The serial exploiter Malcolm McLaren beat her to it with his Deep in Vogue single in 1989. Yet, less than one year later, Madonna drew so creatively from that rich demimonde that she wound up providing the ideal conduit between it and Every Mall USA. In her Vogue clip, Madonna featured experienced vogue dancer/choreographers from the Harlem House Ball community, including Jose Xtravaganza and Luis Camacho, who had introduced her to the style at the New York club Sound Factory.

She then hired them as virtual co-stars on her Blonde Ambition tour. The resulting smash appeared a year before Jennie Livingston’s documentary Paris Is Burning, which filled in the background of the balls. However much cultural appropriation went into Vogue, Madonna’s take on it had to strike anyone, from inside of that world or out, as fierce. – Jim Farber

In 2011, there was a brief kerfuffle over the chorus of Lady Gaga’s Born This Way sounding like the refrain of Madonna’s Express Yourself. Madonna stayed mum at first but made a big statement on her 2012 MDNA tour, performing a mash-up of the two songs while dressed like a cheerleader and twirling a baton. – Caryn Ganz

In 1985, not long after Playboy and Penthouse published years-old nudes of her, Madonna arrived in Philadelphia for Live Aid overdressed for 95-degree heat (she looked like a refugee from Prince’s Revolution) and exuberantly performed semi-polished versions of Holiday, Into the Groove and Love Makes the World Go ‘Round. When she told the ocean of people – some screaming “slut” – that she’d be keeping on her coat, the ocean booed. But Madonna turned spicy: “Nah. I ain’t taking [expletive] off today. They might hold it against me 10 years from now.”

Queen is widely acknowledged to have been the most spectacular thing that happened that day (in the festival’s London block). But a lot of the world had never seen this brand-new pop star (and one of only a few women) sing live. In her way, she rocked us, too. – Wesley Morris

Madonna’s ability to transform herself for albums, videos, photo shoots, tours and movies made her a master of perpetual transformation. As she rolled from one aesthetic to the next, switching up her hair, her choreography, her accent, it became shorthand to describe what was happening in one word: reinvention.

For a while, Madonna rolled her eyes at the description. It seemed crass and calculating in a way she didn’t like. She’d long admired Cindy Sherman, an artist whose chameleon-like quality seemed to her not to be a signal of cynicism, but curiosity.But after fans complained about the lack of hits performed on her 2001 Drowned World tour – Madonna does not like to revisit the past – she decided to pay tribute to her many artistic periods by calling its follow-up tour Re-Invention.

Later, she credited her understanding of the concept to the fashion photographer Steven Meisel and the shoot they did together for the album cover of Like a Virgin. “He treated each photo shoot like it was a small film and insisted that we create a character each time,” she told Vogue, “but then would make fun of the archetypes we created.” – Jacob Bernstein

These days, there’s barely a female pop star alive who doesn’t loudly broadcast her unwavering, if sometimes exploitative, support for LGBT rights. But in 1991, when Madonna gave her no-holds-barred interview to The Advocate, then the largest voice of gay communities, she showed more understanding of queer issues and identity that any pop star before her, and most who came after. In the two-part sit-down, Madonna revealed the roots of her gay identification via her early mentors.

It wasn’t just empathy she was expressing but identification, forged by her defining, early experiences in gay clubs. Important, too, was the interview’s timing, published during the peak era of HIV infections and deaths. It was a time when many celebrities spoke about gay people only in the most nervously chaste ways. Madonna, who had earlier released a public-service announcement about safe sex, went further. She endorsed the uncompromising activist group Act-Up, and spoke in sex-positive terms with a comfort and care that was decades ahead of its time. – Jim Farber

For those of us who think we know the real Madonna, she will always be a modern dancer. Not a singer who dances, but a dancer who sings. She dropped out of the University of Michigan School of Music, Theater & Dance, which she attended on scholarship, with a dream: to dance in New York.

She hoped to join Alvin Ailey American Dance Theater and even earned a partial scholarship to its school, where she was told that she needed to study the Martha Graham technique.

Madonna always has been an exceptional dancer herself, blessed with a highly coordinated body and natural rhythm. There’s something about her career, with its rigor and free-spirited abandon, that feels like a dance. Singing may be her main artistic channel, but her performance is a passionate and ever-growing piece of choreography. Her gift to us has a ring of the eternal: She gave us back our bodies. – Gia Kourlas – New York Times