Paul Banks of Interpol: ‘I was a mystery to myself for many years’

The frontman on his dark side, new lyrical clarity and rap influences on album No 6 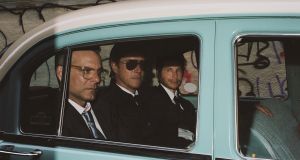 Interpol: “We made an album that’s very minimal and raw and honest.” Photograph: Jamie-James Medina

They may have been together 21 years, regularly sell out venues around the world and are on the cusp of releasing their sixth album, but Interpol still have a lot in common with any teen garage band. Most notably, it seems, when it comes to annoying their neighbours while rehearsing.

“One of them summoned the police on two occasions,” says frontman Paul Banks as he strolls through New York’s Greenwich Village in the baking midday heat. “It was funny because we were like the dog standing there with the ripped-up laundry – in fact, I probably answered the door with my bass still on, and with Sam over my shoulder looking guilty at his drum kit. There’s no way you could say, ‘Oh, no, sir – we don’t know anything about any noise,’ ” he says, laughing. “When the cops show up, it’s game over for the day. It does make for a good story, though.”

It wasn’t long after the touring cycle for 2014’s El Pintor wound down that the trio – Banks, drummer Sam Fogarino and guitarist Daniel Kessler – began piecing together Marauder at that rehearsal space, borrowed from fellow New York rockers Yeah Yeah Yeahs. Having settled into his role as full-time bassist following the departure of Carlos Dengler in 2010, Banks says that this album was informed by his adopted instrument in a way that previous work was not.

“I don’t think we wind up talking about the bass in a lot of interviews,” he says. “I enjoy the instrument immensely and I find that it’s been impactful on my note choice, vocally. This time around I was doing vocals right at the beginning of the songwriting process, as I was doing bass – so there was a couple of songs where the vocal note that I was choosing was impacting the bass note that I was choosing because they happened simultaneously.

“So it was sort of an interesting symbiotic relationship, which I think was different this time around. And in general, just getting to work with Sam and participate in the rhythm section is just fun as all hell.”

With Marauder about “70 per cent done”, Interpol spent much of last year touring their era-defining 2002 debut, Turn on the Bright Lights, for its 15th anniversary. Banks says that approaching that album in a more deliberate way had an illuminating effect.

“I don’t even think in the old days that we played the album in sequence – so that was kind of new and fresh and fun. So much of it was in consistent rotation [on set lists], but there was a couple songs that had been off the rotation for ages, which were Roland and Obstacle 2,” he says. “Obstacle 2 in particular had been gone for years and years, so revisiting that song was really fun and somehow revitalised my perception of a lot of the music on that record.”

A facet of the frontman

Marauder also marks a digression from Banks’s usual lyrical fare, too. He has become notorious for his often impenetrable lyric sheet on past albums, but this time it is noticeably more personal. As the press release puts it, Marauder is a facet of the frontman: “The guy that f*cks up friendships and does crazy shit.” Songs such as Flight of Fancy, Stay in Touch and It Probably Matters are certainly less oblique and there is a theme of “taking responsibility” throughout the album.

“I think in a way, perhaps I was a mystery to myself for many years,” he says hesitantly. “I hope that one benefit of age [he recently turned 40] is wisdom, and I think there’s some clarity that I’m approaching that’s maybe just translated in the lyrics; they seem a little bit more transparent and honest. I would say that I’ve always striven for complete honesty; I’ve definitely never tried to mask things, I’ve always tried to reveal. But I think maybe now, I may be able to reveal with a little more clarity.”

When it came to the music, he says that the band’s minimalist palette was – like every other Interpol album – never planned in advance. With Fogarino acknowledging that soul drummers such as Al Jackson jnr and producers such as Jimmy Jam and Terry Lewis played a role in his process, Banks was most immersed in hip-hop, naming Migos, 21 Savage and Drake as favourites.

“But the only way I can think of anything translating is maybe in my production choices on guitar on a couple of songs,” he says. “Hip-hop often does such strange things sonically, that maybe it sort of inspires me to make weirder guitar sounds? I dunno. Also, I think 21 Savage has a wonderful mic presence; I think he’s like the Chet Baker of hip-hop; he’s barely putting out air when he raps. So I think maybe just trying to pull back and being a little bit more delicate on the mic ... that could be something that I drew from it.”

When it came time to committing the album to tape, their choice of producer (the first time they have used a producer since 2007’s Our Love to Admire) surprised many fans who wouldn’t necessarily have seen the correlation between Dave Fridmann – founding member of Mercury Rev and best known for his production work with the likes of The Flaming Lips – and the New Yorkers’ stoic indie-rock sound. Yet removing themselves from the city and travelling to Fridmann’s remote Tarbox Road Studios in the small town of Cassadaga, New York, was a blessing in disguise.

“I think part of it was just having good people around us who maybe know us better than we know ourselves,” he chuckles. “There was an insight that ‘These guys need to go live together somewhere, away from all the distractions, and something good can come of it’ – and we all felt, ‘You know what? It’s very uncharacteristic of us to voluntarily go to the middle of fuckin’ nowhere in the wintertime and hole up in a house – because we’re grown-ass men with lives, and who the fuck wants to be up there with your bandmates for two weeks on the trot?’ But I think it did serve to have a really good sense of community and solidarity amongst ourselves, and that translated in the record and how we went about recording it.

“For Sam, he’s a major Mercury Rev fan and has been talking about Fridmann since we did our first record. We’re all Flaming Lips fans, we’re all Mogwai fans, and I was super-impressed by MGMT – so when I found out he did those records, that was all I needed to hear. So I think it was a great fit to work with him, and his process was perfect for us.”

The biggest difference between the Paul Banks who joined Interpol in 1997 and the self-confessed marauder is simple, he says. “I think I suffer less for my art and reap the same rewards,” he thoughtfully ponders. “I feel like it’s always something that you worry about; that the spark will go out, or that you just don’t have the same juice you used to have. But I feel like if there’s anything that I’ve been good at as an artist, it’s trying to cultivate and maintain my passion and my sense of connection to real ideas. So that’s what I mean by ‘suffer less’; there’s never any eight-hour stretches of banging my head against a wall to get a lyric – they just come to me more easily now.”

Above all else, there is a lot done but still plenty more to do. “I definitely feel like we have better music in us to write,” he says resolutely. “I feel a really good sense of accomplishment with this record; I’m proud of it and I really like it. We made an album that’s very minimal and raw and honest; even from a production standpoint, it’s very faithful to what we do in the room when we’re playing. But with every record, you almost kind of get a sense of what could come next – and that’s always good to look forward to, too.”