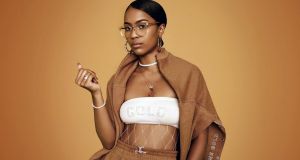 IAMDDB: ‘It’s okay to fall in love, but it’s also okay to love yourself’

Smoking blunts, drinking dark liquor from a mason jar and with a fur coat draped over a pair of togs – something a bit more lush than you’d wear to water aerobics – in her video for Shade, IAMDDB is letting you know she’s got poise and she’s got posture.

Born Diana Debrito, the 21-year-old from Manchester – via Portugal and Angola – makes silky, smooth hip-hop music, and using elements of trip-hop, jazz, neo-soul, trap music and Jill Scott lilts to create what she calls urban jazz. We want her as our own VBF, just so we can absorb some of her laid-back style.

She’s been making, producing and writing music seriously since 2015, but in 2016 she uploaded JAZB to her Soundcloud, a Flying Lotus-inspired beat that she added vocals to, and started turning heads. Like FlyLo, she cuts and splices beats, layering her own voice to make rich and textured songs that take on issues like love, youth, femininity and how to live your best life. Key lessons from a VBF.

Her Soundcloud features dozens of collaborations with other producers (Leaned Out with INKA is a particularly tasty slice) and her trilogy of EPs, Waeveybby Volume 1, Vibe Volume 2 and Hoodrich Volume 3 are a guide to leading a very chilled out but determined life.

(Wavy, or waevey, is the new way of saying cool. And it’s a frame of mind, man. So, jot that down and let’s move on.)

Hoodrich, she says in a video interview from Croatia’s Outlook Festival, is about “making everything out of nothing” and to “appreciate the struggles because good things are coming”. Her positivity runs deep within her music, pushing people to send out good vibes and using her #MermaidSeason hashtag on Instagram, the simple celebration of her different coloured hair extensions, she invites us all to dive into her world and spread the joy.

Speaking to Evocation Collective earlier this year, she hopes that her music can inspire others: “I hope others feel some form of empowerment, acceptance and comfort. We all feel things, good and bad, but so long as you know you aren’t alone it makes things seem not so bad. Reminding yourself of your own self-worth is something I think should be promoted a lot more than it is. It’s okay to fall in love, but it’s also okay to love yourself.”

Yet to be signed to a label, IAMDDB has been working hard all year, releasing music and playing festivals. She’s keen on world domination, so we’ll just enjoy the ride.

For the past month, she’s been touring with American rapper Bryson Tiller across Europe on his Set It Off Tour, which comes to a close to Dublin on November 30th.

This week we are unfriending . . . Puff Daddy

Unfriending: After multiple name changes, Puff Daddy is the Facebook friend who constantly updates their Facebook status, thinking we need his stream of consciousness to get us through the day. Last week, the Bad Boy announced he was going from Puff Daddy to Brother Love, only to revert back to Puff Daddy. Born Sean Combs, he’s been P. Diddy, Diddy and Puffy, and as one of highest paid entertainers in the world (still), he’s proving that with mo money, comes mo problems and mo names.