Leontia Flynn: Serious about the butts of her jokes

‘The Radio’ is an outstanding book from a poet who is not only one of the best writers of her generation but who seems, more and more, to be the voice of that generation 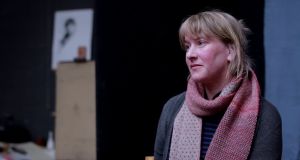 Leontia Flynn’s instinct for or, better, her insistence on, other, awkward voices is clear

Leontia Flynn’s new, fourth collection The Radio (Cape, £10) is agonised, gabby, curt, meditative, cruel (and self-lacerating, too), smart and smarting, funny and, when she tells them, serious about the butts of her jokes.

Here is the parody of a commissioned poem, Ode to Moy Park, “Oh Moy Park, supplier of own-label and customer-branded poultry / your contribution to my life, and lives of all in Northern Ireland, is far from paltry.”

In the same vein, Flynn continues to translate Catullus scabrously, exhilaratingly. Catullus 8 becomes Give it up, Moron while her version of Catullus 28, Government Servants, salutes her subjects, “with your dinky backpacks, / cohorts of bullshit, at its beck and call: / friend-of-my-youth, and you, my bosom buddy, / how is it going?”

If the centrepiece of her last collection was her long, discursive Letter to Friends, her new book’s “friends” are now at a further remove, and she cannot dodge the presentism described in Malone Hoard’s “trove of digital images […] laying the present moment, heavy and useless, ceremonially in the thick dust of itself”.

Away from social media, Flynn archives instead the near past of the pre-internet. August 30th 2013 laments the death of Seamus Heaney who becomes, in the poem, “An ethics: which instructs”, and is pitted against the “brave new world: crowd-sourced and quantified”.

Other, piercingly lyrical poems are as elegiac: Black Mould and Mildew: Obsessive-Compulsive Poem for Lawrence remembers

What we required in those days was no less
than an eternal, stereophonic present
immured from time: replete and frictionless
with all the outside’s sturm und drang – that wasn’t
yet streaming and all-pervasive – kept at bay
obsessively, for love and poetry;

Poem for Ruth in the Heatwave Summer of 1995 bridges the gap between now and then just as bracingly:

Here in this unexpected shiny future
two decades of that insecurity
to which your Que Sera, Sera gave way
have worn your mood and manners all threadbare
as charity-shop finds: the nylon, lace
and not-sure-what you draped about the place

Flynn’s instinct for or, better, her insistence on, other, awkward voices is clear: “The world is born of hysterical men and women. / Our teeth are shiny as accidental stars” (Poem in Praise of Hysterical Men and Women). That poem is part of a set that honours kindred spirits, Bobby Fischer, the Brontes, Hopkins (“his muse being bi[nsey] po[p]lar[s]”) and MacNeice, whose talky, free-wheeling, suddenly acute poems have clearly been good companions to this book.

His short poem Autobiography with its lines “My mother wore a yellow dress / Gently, gently gentleness” informs the long, questioning, sympathetic title poem about her own mother: “She gets her head down, hidden in plain view, / And keeps us close ‘Look: Nothing to see here – right?’”

The Radio ends with three verse dialogues, a description which does no justice to the miscommunications and deafnesses they dramatise. Shortlisted for the TS Eliot Prize, The Radio is an outstanding book from a poet who is not only one of the best writers of her generation but who seems, more and more, to be the voice of that generation.

The title of Andrew Jamison’s second collection, Stay (Gallery, €11.95 pb; €18.50 hb), acts as a way of describing his residence abroad, in England, as a “stay” rather than anything more permanent. Homesick and more melancholy than in Happy Hour (2012), Jamison’s new poems often balance a solitary, adult present moment against a more social, culturally communal other world.

The stripped-down present becomes a trigger for memory, even if the memories of Ravenhill (Spectator), Windsor Park (Friendly) or the coast (Ardglass Marina) are not exactly shiningly happy: “how much we’ll pay / for what: scope, a lookout, a sense of elevation, / summer G and Ts on the balcony, / a share in the ocean’s profundity? / The seagulls pick at flotsam in the car park.”

The same tone – melancholy, jaded – haunts his Paris sequence Souvenir (which ends by repeating, “That feeling that you’ve left something behind.”) and poems which travel, imaginatively, to the fiction of Cormac McCarthy and Steinbeck, or Chekhov’s romantic life. More far-fetched are a poem about Joy Division playing Factory (a venue opened after the death of Ian Curtis and the disbanding of Joy Division) and a sequence, The Lost Songs of Georges Bertrand.

In that sequence, a snarkier persona emerges albeit lines like “I hear the word and I think of home” confirm the suspicion that Bertrand is not so much another poet but an alias. The sequence stretches Jamison tonally, and features one of the collection’s stand-out poems: “Three summers ago my father disappeared,” it begins, before situating this absence precisely and mysteriously:

All I can picture is the half carafe
of Côte du Rhone, the Reblochon,
the whole tomato, sliced, and of course
the half baguette, unbroken, the clock
advancing, my mother beginning
to shoo the flies away.

Ailbhe Darcy and SJ Fowler’s collaborative collection, Subcritical Texts, is the first book publication from Gorse (€13). Nicely designed but not entirely typo-free, its poems are often obscure and tense, pulled this way and that in what feels like a tug-of-war between Darcy and Fowler.

Images of nuclear bombs and fall-out recur and, every so often, in among the cross-talk and non sequiturs, pellucid lines or vivid passages emerge whose clarity feels both hard-won and relieving. “It is wrong” they write in Snooperscope,” to think of the day as busy, / or the army as impotent because of cakes / and waltzes. Do not be fooled, you cannot list / your way out of a fight, even with these beautiful men.” This is a strangely compelling book whose productive tensions are well described in Trumpet: “But no winter could be arrived at that / both parties would agree on; / the nations of you writing and I writing.”

John McAuliffe’s fourth book is The Way In (Gallery). He teaches poetry at the University of Manchester’s Centre for New Writing.