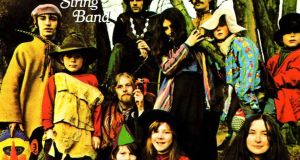 The Hangman’s Beautiful Daughter (1968) by The Incredible String Band

THIS ALBUM CHANGED MY LIFE

Daragh Lynch of Lankum on ... The Hangman’s Beautiful Daughter (1968) by The Incredible String Band

In 2007 a friend I had met in the US came to stay for a few days. She put some music she thought I might like on my laptop. Two of these albums turned out to be two of the most important things that have ever happened to me: Another Green World by Brian Eno and this album by The Incredible String Band.

It was one of those moments when you realise that you have found the exact thing you’ve been looking for, and that it has been rendered to near perfection. I was no stranger to whimsy, stream of consciousness or psychedelic mash-ups, having spent years listening to Horslips, The Beatles and Syd Barrett, but this was different and seemed purer in some way. It seemed to capture perfectly the sense of magic, wonder and enchantment experienced in winter as a child.

The Incredible String Band have definitely been an influence on the Lynched/Lankum project in the last few years, from kazoo interludes and vaudevillian a capella harmonies, to being unafraid to let a song run to almost 12 minutes. Still, we’re not quite up to the staggering 13 minutes and 13 seconds of A Very Cellular Song on this album.

– In conversation with Niall Byrne

Sam Shepherd’s productions fall somewhere between jazz and house music before they are picked up from the floor and given a dancefloor cap. The neuroscientist by trade is methodical in his creative process, but Floating Points’ music always retains a pressing excitement that most studio boffins can’t hold on to. Case in point, the 18 minutes of Ratio (edited to three if you’re running for a bus) offers shuffling jazz percussion, a deep arp bass line, an ambient breather and an unfolding rhythm that makes 18 minutes feel like a short lift to nirvana.

The latest artist through the Diffusion Label stable – which so far has notably introduced Soulé and Jafaris – is a 22-year-old Dublin singer-songwriter whose debut single, Last Night, is a pop song with a soulful slant and a synth hook. The song is about a couple fighting after a drunken night out.