Letters by Jonathan Ellis and Rowena Macdonald from The Letters Page, Vol 2, edited by Jon McGregor 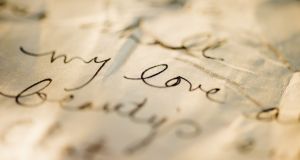 Here are two letters from The Letters Page, a literary journal in letters edited by author Jon McGregor

1/ A letter: On 25 May my Dad died suddenly in his sleep. I’ve written that sentence so many times in the last few months that I almost believe it to be true.

3/For the last two weeks of his life Dad didn’t eat or drink. He had what most people euphemistically call a ‘water infection’. It hurt when he went to pee.

4/ Dad’s solution to this problem was to stop drinking. He gave up liquid in stages. First tea. Then orange juice. Then milk.

5/ He never gave up water because he never drank water.

6/ ‘Dad, you can’t stop drinking’, I said. ‘You’re going to die’. Not believing me, or perhaps believing me, the last drink he gave up was Lucozade. ‘Everything else tastes of metal’.

7/ The water infection didn’t kill him. The death certificate said it was a secondary cause.

8/ On arriving at the house I found his last letter. It was written to himself as much as anybody else. A rectangular yellow Post-It note, reminding himself to give Mum her insulin and to shave. He also wrote the PIN of his debit card in the top right-hand corner. He couldn’t seem to remember numbers the last few months.

9/ He gave Mum insulin twice a day. Remembering it was one of the last things he remembered to do.

10/ I don’t know if he remembered to shave. I forgot to ask my brother.

11/ The PIN no. worked for a week until the bank received the letter he was dead.

12/ They wrote me a letter to apologise. ‘You may still continue to receive letters addressed to your father’.

19/ I probably need to re-direct this post when the family house is sold.

20/ ‘Don’t tell your brother I’m not eating,’ were I think his final words.

26/ PS I bought this paper in a Japanese stationery shop in Montreal on my honeymoon eight years ago. This is the first time I’ve used it.

27/ PPS. My Dad’s Post-It notes were not half as beautiful. But I’ve kept them all. For safe keeping. Even the last one.

Dear readers,
The other day I was in Newhaven on the south coast. The town is a desperate place of boarded-up shops. Among the few that cling on is [redacted], a second-hand bookshop owned by a posh older bloke with a red face, who always seems half-cut. He sits outside, reading the Times, and smiles mildly when you go in. His stock, which seems to have come from various house clearances many years ago, is piled higgledy-piggledy with no attempt at order. It smells of damp. Classic FM plays in the background.

As I now have a family, albeit a small one, I picked up a cookery book entitled Family Meals, published in 1977 by Marks & Spencer, part of the St Michael Cookery Library. I wondered why and when M&S got rid of that St Michael brand as I flicked through garish pictures of chicken pies and lasagnes, I found tucked between pages 72 and 73 (which had recipes for vanilla ice-cream and Melba sauce, with ingredients in imperial measures), a letter from Jason to Kim, typed on a page torn from a hole-punched notebook on 5th June 1982. Jason of 50, [redacted] Avenue, Surbiton, Surrey (no insistence on postcodes in those days). Jason of the flamboyant signature and the four kisses. Jason who has sent Kim at least one poem and written many more. Jason who thinks of Kim every day in bad French. In my mind, Kim looks like Kim Wilde. She is beautiful, kind but slightly aloof from the lovelorn Jason. I sense he is lovelorn. It is Kim who he pines for as he sits at home on a Saturday night, typing out his poems and waiting for his mysterious Monday operation which will enable him to work again and “feel a lot better”.

Kim is more alluring than the “young lady” who keeps calling him up and “getting too close”. Kim, though, has written a recipe for a pavlova on the back of Jason’s letter & casually used it as a bookmark. She thought about making vanilla ice cream for her first ever dinner party, but it’s too much bother; she’ll buy a striped block of Neapolitan from the Spar and serve it in slices with her pavlova. She’s off to France in August. She will have a good time there, as Jason predicts, a Gauloise between her red lips, sunglasses perched on her bleached blonde hair. She won’t think about Jason much and when she does she’ll feel guilty pity. She and Nikki, their mutual friend, worry about him. They wish he’d find a girlfriend, they hope he’ll get a proper job after his operation and stop fantasising about being a poet and songwriter. His poems have never been published and no one famous has ever sung his songs so they don’t know why he’s worried about copyright.

They like him, though. He’s sweet and open, too open – almost naïve. They’ve known him since school. They used to hang out at lunchtime on the playing field, reading Smash Hits and then the NME when they got older and were trying to be cool. He got on better with girls than boys. He wasn’t into football and fighting and the other boys called him a “poofter”. In fact, Nikki and Kim wonder if Jason is actually gay but can’t admit it to himself. It is becoming easier to be gay these days – look at Boy George. But Boy George doesn’t live in Surbiton with his mum. Maybe one day Jason will come out, leave Surbiton for Brighton where Kim now lives and they’ll go clubbing. That’s if Kim’s husband, who she hasn’t yet met in 1982, allows her a night off from the kids and cooking Family Meals from the old recipe book her mum lent her when she went off to art college.

Where are they now, Kim, Nikki and Jason? I reckon they’re in their early-to-mid 50s, judging by their names. They were in their late teens to early twenties then, still finding themselves, still with time to write letters and poems and have intense friendships. Does Nikki still write her name with circles above the ‘i’s, or hearts when she’s feeling extra cheeky? Has Kim split up from her boring husband who never really understood anything about her, including why she would be friends with someone like Jason? Did she chuck out Family Meals when the family home broke up? And, Jason, did he ever get his poems published? Does he still think about Kim toujours? Does he still have her old letters? Does he ever re-read them? And if he does, does he feel as much nostalgia for the 80s, the era of my childhood, as I do, reading his letter thirty-four years after he wrote it?

Dear Kim
Thank you for your letter, which I received this morning. I am glad you liked the poem. By the time you receive this letter I will have had that operation I have been waiting for. I go into hospital tomorrow (Sunday), and they operate on Monday. I cannot wait I have been waiting for months, also when it is over and done with I will be able to start work again which will make me feel a lot better.

I have typed out a lot of my poems and lyrics so I can get them copyrighted, I have so many which I have written over the years I do not know where to start. I do not know which are worth having copyrighted or not, or any of them are worth copyrighting. Not alot (sic) has happened this way, having a bit of a problem with a young lady I know. She keeps calling me up and getting too close, I am just not interested and I find it difficult to tell her or anyone as a matter of fact, to back of (sic), oh well I will think of something I always do.

Nikki told me you were going to France about August time, but I was not too sure about the exact dates, I hope you have a good time (which I know you will) but no doubt I will hear or see you before then, I hope. Any way (sic), I must love you and leave you and I will hear from you soon, and I will call you soon. Look after yourself and give my love to Nikki if you hear from her.

Love you as always
Jason xxxx

The Letters Page is a literary journal in letters, published by the School of English at the University of Nottingham and edited by Jon McGregor.

All Together Now: Full line-up for festival revealed
Real news has value SUBSCRIBE