Steps review: A triumph with a Tragedy

Who expected Steps to deliver one of the best pop shows of 2017? 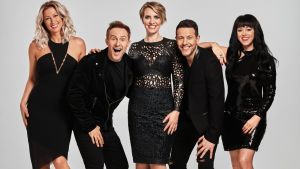 The 3Arena cuts to darkness. On the big screen, the five individual members of Steps don red velvet capes and gold masks. As their images fade, a gothic church fills the screen and caped dancers march through the crowd holding fire torches. It’s all gone a bit Dan Brown. Gregorian chants fill the arena and red flames shoot up and down the stage. The band, dressed in red PVC and lace, rise up from below and immediately cut into Scared of the Dark.

Barely one minute into the extravagant, orchestral disco song from their new album Tears on the Dancefloor, and it’s clear this is a Steps show like none before. What could have been tacky is a celebration of pop. The 10 dancers, now dressed head to toe in red gimp bodysuits, twirl around as they dive right into Deeper Shade of Blue, their demented, furious, house-inspired single from 2000.

Hospital beds then roll on to the stage for their cover of Diana Ross’s Chain Reaction. The male and female backing dancers are now clad in latex nurse uniforms and cling on to H, Claire, Lisa, Lee and Faye. It took Steps 20 years to go from vaguely silly to solidly sexy and in the age of reunions where S Club 7 are reduced to a mediocre S Club 3 and 5ive reduced to a less-than-average 3ree, this is a wondrous achievement.

Earlier hits like Better Best Forgotten, Last Thing On My Mind and One For Sorrow, which they mix up with Jackson Five’s Can You Feel It, delve deeper into a more mature disco sound with the visual elements of their dancers swinging out of the ceiling dressed as disco balls.

“What an incredibly amazing year you have given us,” says Faye, not long before they throw on the fringed cowboy jackets for 5, 6, 7, 8, the song that started it all 20 years ago this very week. The stage transforms into a barn and it’s a full-on hoedown between the group and the dancers. They clearly hate this song but admit that without it they wouldn’t be here in front of us. “Now, let’s move on to something else,” says Claire, “anything else.”

Singing live throughout, each member gets a chance to show off. The ladies have a quiet moment singing Barbara Streisand’s No More Tears and the lads give Despacito a go and it isn’t awful. They keep the pace at 90 all the way through, stopping only to show their gratitude to the fans who have kept them going for two decades.

Steps have created an experience that boosts their back-catalogue while putting on a production that’s on a par with a Kylie Minogue show. Little touches like having H, who didn’t publicly come out until 2007, partner up with a male dancer, and seeing them hold on to each other for support during Heartbeat, when they barely spoke to each other in 2009, shows how far they’ve come. To survive the 1990s is one thing but for a pop group to come back 20 years later with a top-10 album and a slick tour like this is little short of a miracle.

As the show comes to a close, darkness descends once again. A church organ erupts into the wedding march. A stained-glass projection of Steps appears and the stage is now a giant wedding cake. Not only is it Tragedy, but it’s the best thing ever.