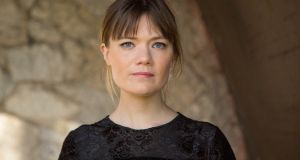 Eithne Shortall: novelist and chief arts writer on the Ireland edition of the Sunday Times

Irish author Eithne Shortall has signed a six-figure deal with a US publisher for her second novel, Grace After Henry. Her debut, Love in Row 27, meanwhile, has been optioned for a TV series by NBC Universal Studios International, the production company behind Downton Abbey, Friends, Seinfeld and Law & Order.

Shortall, 31, who is chief arts writer on the Irish edition of the Sunday Times, said: “I had only finished the book four days when I got this news, and it has been two weeks now and I am still pinching myself. It has been a great whirlwind! I am so delighted, and still a little shocked, that Grace After Henry is going to be in American bookshops and the hands of real live American readers. I am excited for it to be in the hands of readers everywhere. I really believe in this book, and I think part of its appeal is how fundamentally Irish it is. A lot of writing it felt like magic; it is built on many moments of serendipity. The characters are real to me, and I’m just hoping readers will feel the same.”

Grace After Henry is described as a witty and heartfelt story of love, loss and moving on. Grace loses her partner in a freak accident just as they’re buying their first house. She is convinced she sees Henry everywhere until he really does make his way back into her life in an unexpected manner and Grace’s world is blown wide open.

The novel will be published in Britain and Ireland next May 2018 by Corvus, an imprint of Atlantic Books. Putnam, an imprint of Penguin, will publish in the United States in early 2019.

US publisher Tara Singh Carlson said she fell in love with Grace immediately. “Her love for Henry is so real, but so, too, is her healing, sparked by the most unusual of circumstances,” she said. “This is one of those books that really makes you think about what you would do if faced with these extraordinary events. Grace After Henry is moving, and funny, and real. I can’t wait to introduce Eithne Shortall to an American audience!”

Love in Row 27 is about an Aer Lingus check-in attendant at Heathrow playing cupid to unsuspecting fliers while possibly finding a match of her own. It has already sold into nine territories, and seven languages, worldwide.

Sarah Gilmartin’s review in The Irish Times called it “an uplifting novel that wraps you in its clutches ... The hallmarks of a classic romance are given a 21st-century makeover”.

Shortall said: “Love in Row 27 is a story about possibilities; about the many ways life can turn out, and about how we sometimes distract ourselves from our own lives by getting involved in those of others. I wanted to write a story that was fun and smart and heart-warming. There is a certain kind of book that acts as a blanket – where you feel warm and looked after while reading it – and that was just the sort of thing I wanted to create.”

Remembering The Diceman: gay icon, national treasure and obstacle on the way to work
3