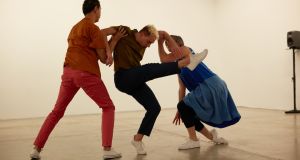 A view of performers in Expanding Fields by Jenny Roche

When the State’s cultural institutions were closed by Taoiseach Leo Varadkar on March 12th in response to the coronavirus outbreak, Thisispopbaby had just launched a festival of new work at the Project Arts Centre which hoped to engage in a deep political and social dialogue with contemporary society. The festival, titled Where We Live, came to a close before most of the performances had found a footing on the stage. This month, the Project Arts Centre was due to host another festival of cutting-edge, experimental work, in the shape of the Live Collision International Festival, curated by the festival’s artistic director, Lynnette Moran.

As Moran explains, “when the closures happened we had not yet announced our programme, so we were luckier than many. We had a chance to reconfigure the festival so that it might still have a presence, to think about how we might present it in a different way.”

For Moran the challenge was two-fold. As founding artistic director of Live Collision, she comes to the programming challenge every year with a “distinct curatorial intention” that is shaped “not just around the work itself, but around bringing together a group of individual artists, to see how their work resonates when set beside each other and how it resonates for an audience in that context”.

Although a lot of the work engages with digital media in experimental ways, Moran explains that “audience experience is central to any live work, but in a particular way for live art audiences”. Artists in Live Collision’s programme, she says, “are engaged with how the audience is navigating a performance intellectually or physically; that transaction is an important element of why [the artist] is making live work at all. So it’s not enough for them to just record the work and for us to put it out there, although there is a place for that sort of engagement in other contexts and there are big institutions like the National Theatre in London who do that really well. But for our festival, and the artists within it, performance is about a dialogue: with fellow artists and with the audience.”

The question Moran found herself asking, then, when it became clear that the festival would not happen as planned, was: “How can we continue to be a community this year?” After conversations with each participating artist, “it became clear early on that it wouldn’t serve us to just present work made for a different medium online. If we were to present the programme at all in digital form, it would have to be in a meaningful way, where the interactions would be specifically made or remade for [this new] form, so that the audience would be having a genuine experience, albeit at a remote distance.”

With this in mind, Moran set about investigating an “electronic digital render, a sort of hybrid new festival model”, where artists could converge and converse, and audiences could engage with elements of the programme, even if that did not necessarily mean presenting artists’ work. As Moran and her original eclectic programme for 2020 testify, “every artist’s individual context is very different. So what is possible for one artist to achieve by reframing the work is impossible for another. It has to do with form, intention, but also where they were in the creative process at the time the country went into lockdown.”

Brokentalkers, who recently won best production at The Irish Times Theatre Awards for their searing documentary theatre piece The Examination, were one company for whom a digital iteration would be impossible. At the time of lockdown, they were midway through rehearsal for To Be Frank, the culmination of a long-term collaboration with artist Fiona Whelan and Rialto Youth Project, which was due to premiere at Live Collision. As Moran explains, “given the conditions for social distancing, they couldn’t ethically ask performers to be in a space together, so they had to press pause on the project”. They won’t be able to complete it in any form until restrictions are lifted.

Decoys, a new solo performance piece by community artist and activist Shaun Dunne examining the reintegration of sex offenders into mainstream communities, was another project whose intentions would not be transferable until live performance becomes a possibility again.

As Dunne explains, he had hoped to use the festival to deliver “a 30-minute scratch performance of some new ideas and text for performance to a community of artists and audiences that are known to be generous and up for something a little bit different”.

The coronavirus crisis means the project is paused for the foreseeable future, but Dunne is “trying to view the stalling of the work as a positive. This particular conception hasn’t altered because of Covid-19 but maybe the [intervening] time will take me somewhere different.”

For other artists, meanwhile, there was an opportunity to reframe how their work might be shaped in a hybrid context. Jenny Roche’s Expanded Fields was one such project. The piece, which had a viewing at Limerick City Gallery of Art last November, is a moving-image installation that combines live performance, sound and virtual reality, “inviting audiences into proximity with a piece of choreography, to encounter the inner worlds, images, sounds and sensations that dancers experience in the performance of a moment of dance”. Made in collaboration with London-based artists Ruth Gibson and Bruno Martelli and composer Mel Mercier, the piece sees the audience guided through “an encounter with live performers in the [theatre] space”, where they “explore film, sound and virtual reality traces of the work that the dancers leave behind”.

Roche, who is a lecturer in dance at the University of Limerick, elaborated on how the multidimensional nature of the work allowed them to consider an alternative form for it. “We have a lot of film footage that is part of the overall work,” she explains. “And there are virtual reality environments that have been constructed as part of the installation experience. This lends itself well to giving a digital experience for audiences, so while [a digital happening] was not the expected outcome, it would not be too far removed from our original conception for the work.” Even so, Roche mourns the “wonderful dimension that live dance and music bring to the experience”, in particular the opportunity for the live performers to showcase their skills.

For Moran, meanwhile, the desire to present the festival despite the current crisis wasn’t just about the creative output. It was also about the creative contract too. Basically, Moran says, “we still wanted to continue to pay and support artists to realise their work”. In the 15 years since its first showcase, Live Collision has increasingly committed to supporting work in development, through commissions and mentorships. Moran was determined that those commitments this year should be honoured, hence the decision to create a “limited live iteration for the festival later in the year”, where artists in development can still avail of the rare opportunity to put their work in front of an audience invested in the kind of artistic risk that Live Collision has always fostered.

Moran commends the Arts Council for their “leadership in honoring payment so early after lockdown, as it allowed a festival like us to honour our commitments”. All going well, this live run will take place in November, over two days instead of over the originally scheduled five.

Moran acknowledges that the current social restrictions and necessary reconceptualisations of live performance resulting from the public health emergency will have a radical knock-on effect for all performing arts practices going into the future. Arts festivals like Live Collision may end up taking on entirely different forms. “If you think about all the journeys we need to take beyond our physical selves at the moment,” she concludes, “from keeping calm to looking after people we love from a distance, digital technology has been vital to allowing us to stay connected to each other. And cultural experiences have been an important part of what people have been looking to [to] keep sane. So there is a connection there, a provocation, that needs to be explored.”

Roche agrees, suggesting that the cultural lockdown has accelerated conversations that have been circulating for some time, particularly surrounding the ethics of cultural production in relation to climate change. As she frames it, “how to continue to collaborate across our networks without engaging in so much unnecessary travel. So, [these new circumstances] are pushing us all to imagine in a short space of time how we might reconfigure our working and performing practices.” Live performance, as we know it, may never be the same again.

Live Collision Electric Dreams will run from April 22nd-26th with a series of performances and roundtable discussions on a digital platform, www.livecollision.com/electric-dreams-2020/

Live Collision will run at the Project Arts Centre in November

Surviving Autocracy: an inventory of awfulness
7