Restaurant food at home? Here's how to get it 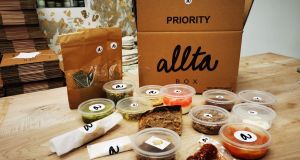 Allta restaurant in Dublin has launched a subscription service that will allow customers to sign up for a weekly delivery of food, some of which will require cooking or finishing at home. The offer goes live at allta.ie at noon on Saturday and the first batch will be dispatched next week.

The boxes cost €55 each, per week, including countrywide delivery by courier, and subscriptions can be for between two and five weeks in duration. The boxes will contain sourdough bread and shiitake miso butter; house-made charcuterie and pickles; two different pastas and sauces (enough for two to share); dessert, and a batch of ready-to-bake cookie dough. They can be ordered between noon on Saturday and midnight on Sunday, and will be delivered on either Thursday or Friday each week.

“Rather than a takeaway, we decided to do a home delivery service. This way the diner gets involved in a little gentle cooking, and also gets to choose how they enjoy the allta Box - either all together, or spread out over a few different meals - while we get to keep busy and experiment with new combinations and dishes,” says head chef Niall Davidson.

The food will be prepared by Davidson, along with fellow chefs Hugh Higgins and Kevin Burke, and the menu will change weekly. “We have an amazing larder of stuff, and the subscription model means we can plan ahead,” Davidson says.

Supply is being capped at 100 boxes a week, to allow the chefs to comply with coronavirus health and safety regulations. Only two of the three chefs will be on duty at the same time, and they will each be temperature checked before starting work.

Catherine Cleary, reviewing Allta in January, described it as “an unpretentious new wine bar with delicious food”, with “ accomplished cooking”.

Other restaurants that have adopted a cook-at-home delivery or collection model include Liath in Blackrock; The Butcher Grill in Ranelagh, BuJo gourmet burgers in Sandymount and Platform Pizza in Bray.

Michelin-starred Liath is offering a two-course meal for two, with some re-heating and assembly required. The Butcher Grill is selling meal boxes of either Côte de Boeuf, chateaubriand or striploins to cook from scratch, with side orders to reheat, and desserts.

Bujo burger restaurant has devised a delivery box containing burgers, buns, sauces and trimmings, ready to cook. The Platform Pizza box contains everything needed to make five pizzas. It is being distributed by StuffUNeed, a new online shopping and delivery portal operating in Dublin.