Brief reviews of Irish and Ecology, by Michael Cronin; The Missing, by Michael Rosen; and Tender is the Flesh, by Agustina Bazterrica 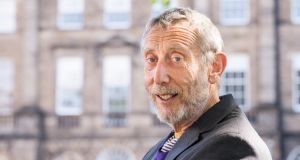 Irish and Ecology
By Michael Cronin
Foilseachain Abhair Spioradalta, €15
This book makes a case for using the Irish language in the fight against climate change by re-engaging with an original relationship with the land. (There is an English and an Irish text.) It draws connections to other indigenous languages across the globe and the local peoples who are fighting mining and other exploitation of their land. The book quotes philosophers, activists and writers. It talks of how landscapes are inscribed in the original language, providing a conduit for reconnection with the “original” world, yet the problem is that the vast majority of people live in an urban landscape and/or the virtual world. Still, this book provides a fascinating and timely call to arms. – Kevin Gildea

The Missing
By Michael Rosen
Walker, £8.99
Michael Rosen is a renowned children’s novelist and poet. In 2004, after his son died, he published his Sad Book, a beautiful, poignant meditation on what it means to live with grief. Born into a Jewish family in London, Rosen had always wondered what happened to his relatives during the second World War. This is the story he tells here, in bits and pieces, through letters, personal reflections and poems. Poetry, for Rosen, is a way of working through the events of one’s life, both on a micro and macro scale; poems are the pictures of the mind, and these are what he offers his readers. This is essential reading for both adults and children, a powerful exploration of the trauma and joy of one family’s history that becomes, in all the ways that matters, a meditation on what it means to live in a world that steadfastly refuses to make sense. – Becky Long

Tender is the Flesh
By Agustina Bazterrica
Pushkin Press, £14.99
Is a dystopian novel what we need currently? This book cover asks the question: “If everyone was eating human meat, would you?” A deadly virus has infected animals, or so the government alleges, and meat has become poisonous. The response? The organised farming of “nameless humans” sold under the label of “special meat”. This is a society with skewed moral judgement, not only with its insatiable appetite for meat but in its lack of humanity. While animals may be extinct, their presence is conspicuous in Bazterrica’s curt, animalistic prose (translated by Sarah Moses). Tender is the Flesh is interesting in its concept, rights have been sold in nine languages and TV rights have been optioned, but its lack of subtlety is such that the book fails to really provoke questions of morality of which it may otherwise have been capable. – Brigid O’Dea