Pussy Riot’s Maria Alyokhina: ‘Russia has a very dark history, as you do in Ireland’ 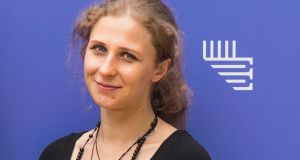 Maria Alyokhina will be in conversation with Conor O’Clery at the Mountains to Sea festival in Dún Laoghaire. Photograph: Simone Padovani/Awakening/Getty Images

It’s seven years since Pussy Riot became internationally famous, performing inside a Moscow cathedral during a direct action that ended with a trial and custodial sentences for members Nadezhda Tolokonnikova and Maria Alyokhina, who served 21 months in prison.

The Russian political punk art collective remains a blistering force in contemporary protest art. Their merch at gigs declares Anybody Can Be Pussy Riot. Railing against Putin’s oppressive regime with disarming colourfulness, ludicrousness and satire, they are a force for change and inspiration, who thumb their noses at the constraints of censorship and the forces who seek to limit their expression. On March 30th, at the Pavillion Theatre in Dún Laoghaire in Dublin, as part of the Mountains to Sea festival, Alyokhina will be in conversation with Conor O’Clery, former Moscow correspondent with The Irish Times.

Released from imprisonment late in 2013, Alyokhina published Riot Days in 2017, a compelling memoir that plays brilliantly with structure. The book’s form – vignettes, quotes, drawings, lyrics, dispatches from jail, reflections on freedom – is, like Pussy Riot, defiant, avant-garde, queer, and freeing. Some passages are so raw and charged, they almost implore tears to fall. “The words of the dissident Bukovsky come to me: for years ago, he did time in a labour camp not far from where Major Ignatov wants me to plead guilty: ‘They no longer want people to believe in a bright future; they want submission’,” Alyokhina writes, “And if I accept their authority, by agreeing to lies about violating the regimen, I would be submitting too. I’d be pleading guilty to a crime I didn’t commit. Such moments of choice, made in prison, will stay with you for the rest of your life. These decisions become the most important ones you ever make. Because you can’t forget anything you do here within the prison walls. Once you betray yourself, even a single time, you can’t stop... And that means you have been defeated. They will have truly deprived you of your freedom.”

A subsequent Riot Days live performance tour, positioned the book as both a source text and a living document. “Riot Days is more than just a gig,” Kate Hutchinson wrote in the Guardian, “it’s somewhere between a gripping piece of Putin-skewering musical theatre, an urgent jazz-punk book recital and a film screening that unfurls like a nerve-shredding thriller”.

On the phone from New Zealand, Alyokhina has found herself in the midst of a society in mourning following the mass shooting at a Christchurch mosque. “Now it’s a hard time for this country,” she says. “We didn’t know that we would be a part of this. The day when the mass shooting happened in Christchurch, we had a concert, and our venue was several blocks from a mosque. We were on the way to Christchurch when we received the call about what was happening. We were quite shocked. After that moment I think a lot of things changed.” But within this grief, New Zealand has also acted as a source of inspiration for Alyokhina: “All the communities that are here, it’s really interesting for me, that they all say the one thing, that they will overcome this hatred, they will be united with Muslim communities here, which I see already happening. This is incredible. New Zealand is unique and that’s why I fell in love with this country. Community means more than the government.”

Alyokhina says the main point of Riot Days “was to write a fairytale which is actually true”, with the imagined target audience being “somebody who doesn’t know anything about Russia, about Putin, about Pussy Riot, about all of these problems – just imagine a 15-year-old who came from a friend’s house and found this book”. There are references to Russian punk songs, Russian classic literature, contemporary artists and poets throughout. “I wanted to make something fun, especially in Russia, where we don’t have a lot of satire because satire was crushed by Soviet Union dictators. A lot of people making jokes about Soviet Union dictators were shot, killed . . . we have a very dark history, as you too probably do in Ireland. ” But even in the darkest times, Alyokhina attests, you can still make jokes.

Alyokhina says that when she came out of prison, Russia had changed again. “When we made the first action at the Olympic games in Sochi, we felt the situation in the country was totally different, really f***ing different. It was the first time when we were beaten, by the way. Even in prison we were not beaten. We did not accept any physical organised violation on our bodies. But when we came to Sochi, when we played the song, Putin Will Teach You How to Love the Motherland, in front of the sign for the Olympic games, the [security] came with whips and also, you know, pepper spray. One of the guys put the whole balloon of pepper spray to the eyes of Pyotr [Verzilo], which was incredibly awful. He almost lost his eye [sight]. Then one month after that we decided to go to Nizhny Novgorod to give some food and books to my friends, and these Nazi groups which were created in 2014 just after the annexation of Crimea, one from our team lost half [sight] in one eye. She is kind of half blind after that.”

It is hugely important for Europeans to understand this situation, Alyokhina says. “War is still in the Ukraine, it didn’t stop. It’s still Russian troops, Russian army in Ukraine, it’s still going, Russian authorities and oligarchs putting money which they stole from Russian people to European countries, especially to London. I’m not saying you’re similar to London, but anyway. Even after the sanctions.” At the same time, she knows that the representation of Russia and the mindset of many Russians is difficult to get across without first-hand knowledge or experience, given how distorted media representations are inside and outside the country. “A lot of people, the majority of the people probably disagree with what’s going on,” Alyokhina says, “you just don’t have an option to see them on TV, that’s why I come to different countries to show it’s not only these assholes, it’s us as well. There are a lot of us.”

Although she tours internationally, Alyokhina is technically not allowed to leave the country. She says she has hours of community service left from actions last year, which she hasn’t finished. “I’m not allowed to cross Russian border, officially. I cannot fly from Moscow, to, let’s say, Dublin, or to anywhere. One time when I tried, I was stopped by FSB, so it was a big issue in Russian press because one day after that I left country because I performed in Edinburgh. ” This defiance is central to Alyokhina and to Pussy Riot. Her art and protest is still jubilant, still imagining a better time. “I’m not pessimistic,” she says, “If you are a pessimist, you will not do anything properly, you will just start to cry and you will not stop.”

Maria Alyokhina will be in conversation with Conor O’Clery at the Mountains to Sea dlr Book Festival on Saturday March 30th mountainstosea.ie