Dumbo: If you ignore the elephant in the room, it’s a rip-roaring film

Review: Tim Burton makes canny use of a delightful cast including Colin Farrell and Eva Green 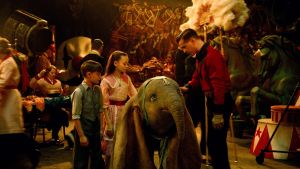 Let us, for a moment, ignore the elephant that’s not in the room. We should tip a ringmaster’s hat to Disney for not turning the live-action version of Dumbo into a straight retread of the heart-rending 1941 original.

Scrunch up your eyes at the recent Beauty and the Beast and you could have been watching a longer version of the cartoon. The current Dumbo does hit many of the familiar beats.

Had Tim Burton and his team cut Baby Be Mine they would have deserved any horsewhipping that came their way. Other tunes also get reprises. This is, however, more of an original take than we have come to expect from the recent remakes.

Yes, it’s very much a Tim Burton film. But we should be grateful for even those well-worn variations.

Changing times have dictated a few of the alterations. Burton and Ehren Kruger, his screenwriter, have shuffled away the racist crows – jaw-dropping now -- and slipped bits of When I see an Elephant Fly, their big number, into another musical interlude.

The film is constantly at war with the current perception of the traditional circus, with its captive wild animals, as A Very Bad Thing. Not every tweak works in this regard. A late inclination towards ethically sound fairground practices feels wildly implausible even in such a fantastic entertainment (good luck surviving the Great Depression, guys).

The film cannot, however, be faulted for its canny exploitation of a delightful cast. This Dumbo is set in the aftermath of the first World War. A characteristically charming Colin Farrell plays Holt Farrier, a circus professional who, now with only one arm, returns from combat to care for his children. (Their mother died while he was at war, adding to his feelings of guilt.) His son (Finley Hobbins) is a decent tyke.

As is often the case in current family cinema, his daughter (Nico Parker) is a trailblazer in what Americans call the Stem subjects. It would be a sin if anybody other than Danny DeVito got to play the Danny DeVito Role – a cynical huckster with a heart of gold – and, sure enough, that lovable actor is on hand as circus owner Max Medici.

Eva Green, born for Burton, has a similar claim on the exotic trapeze artist.

All get to do what they do. Farrell can angle his head sympathetically to one side as effectively as George Clooney once did in ER. DeVito hustles like a pro. Both see different opportunities when a newly purchased lady elephant gives birth to (if this counts as a spoiler then welcome to the planet) a flying baby, ultimately named Dumbo.

This attracts the interest of dastardly VA Vandervere (Michael Keaton, also well cast) and the film takes one of the oddest imaginable turns for an emanation from this source.

It is an interesting coincidence – timely or untimely, depending upon where you’re sitting – that his company’s voracious acquisition of the Medici Brothers Circus arrives just as Disney completes its purchase of 21st Century Fox. It is odder still that the resulting soulless, corporate theme park cannot help but remind viewers of Disneyland (I love Disneyland, but still…).

More power to all the elbows involved. That unusually pointed satire salts up an entertainment that otherwise leans towards the sweet and the wholesome. You might almost call the picture a rip-roaring success if it weren’t – here we go – for the elephant that’s not in the room.

The 3-D animators have, in creating Dumbo himself, stranded themselves in the unhappy valley between anthropomorphism and verisimilitude. Compared with the delightful semi-child of memory, the current incarnation is a characterless grey blob with the lifeless eyes of a kewpie doll. That’s just one thing. But it’s one very big thing.

Otherwise the film is grand.

Level 5 lockdown TV: From The Crown to Dead Still, the ultimate guide to what to watch
7

Unthinkable: Why it makes sense to be a neo-Luddite
8

The 40-Year-Old Version: A wildly entertaining movie, in a big week for Netflix
9 NATO has to explain its motives and aims on Kosovo
10