Madama Butterfly review: an airbrushed Pinkerton but a triumphant production

Why couldn’t a truthful response remain focused on what befalls a child of fifteen, recalling other fifteen-year-old girls? 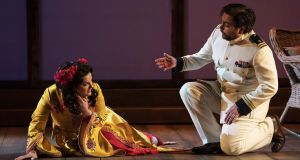 I need a director to hate Lieutenant Pinkerton as fiercely as I do. Because Butterfly was only fifteen.

After meeting and purchasing the child through a local marriage broker while on shore-leave, the US naval officer alienates her from her family, deflowers and impregnates her, then departs on his ship.

Within minutes of curtain-rise he is boasting: about how he “casts his anchor” wherever he wants, winning “the fairest pearl in every country”, a marriage contract that allows him to annul at any time, how a butterfly’s wings may get broken, how eventually he will marry a “real” wife.

Three years later - during which Butterfly has waited with painfully misguided but unshakeable belief - he returns, but only to take away the child (which ultimately he hasn’t the guts to do himself). This is a guy who today would rival the worst offenders exposed by the MeToo movement.

A softened portrayal of Pinkerton ends up at odds with his vile words and deeds, presenting him as merely a gormless, even relatable pleasure-seeker

But director Ben Barnes, in Irish National Opera’s first Puccini opera, suggests that “the only truthful way to respond to this story is to see it as a metaphor for shameless colonial adventurism”, something he appears to hate more than Pinkerton.

So under Barnes, a softened portrayal of Pinkerton - although sung with highly sensitive lyricism by tenor Julian Hubbard - ends up at odds with his vile words and deeds, presenting him as merely a gormless, even relatable pleasure-seeker, with his almost sociopathic cynicism and heartlessness virtually airbrushed out.

Meanwhile, Barnes samples colonial adventurism via US involvement in Vietnam and Cambodia, even though Puccini’s story is set in the Japan of 1904 where Pinkerton’s America was acting on no colonial ambition and where, in fact, Japanese society was enthusiastically “Westernising” in the interests of industrial and military development. Why couldn’t a truthful response remain focused on what befalls a child of fifteen, recalling other fifteen-year-old girls, like Shamima Begum or alleged victims of R&B singer R. Kelly?

Everything else Barnes assembles and oversees for this production is a triumph: the large, classic designs (Todd Rosenthal), the vivid yet straightforward costumes (Joan O’Clery), the grace and flow of movement (Libby Seward), and the judiciously chosen cast and chorus, particularly the main supporting roles of US Consul Sharpless (baritone Brett Polegato) and the maid Suzuki (mezzo Doreen Curran), whose pained awareness of Butterfly’s fate makes them both avatars for the audience.

Above all is his casting of Irish soprano Celine Byrne in the title role. Mastering its exceptional difficulty can morph into something like an Olympic sport, with listeners often tempted to assess it that way. But this never occurs to you with Byrne’s singing which does not say either, “See, I can do that!” or “Did you see how hard that was?” She simply delivers Puccini’s music - exquisitely, seemingly without effort - which then delivers the emotion and import of the moment, perfectly. Byrne is outstanding.

Borg vs McEnroe: the power and the fury
5

The movie quiz: Who has never starred in Little Women?
9