TV review: Maggie Molloy is on a mission to help house-hunters with small budgets find a home 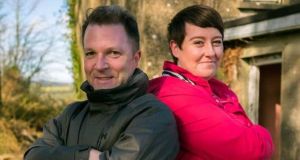 Kieran McCarthy and Maggie Molloy are the presenters of Cheap Irish Homes on RTÉ One on Tuesday night. Photograph: RTÉ

While we might drool – or growl – our way through Room to Improve and Home of the Year, for the bulk of us the budgets involved make them shows that belong in the fantasy category, featuring pads you could only afford if your EuroMillions numbers came up.

Much more relatable, especially if you’re looking to buy your first nest, is Cheap Irish Homes (RTÉ One, Tuesday, 8.30pm), in which Maggie Molloy offers house-hunting help to people who are dreaming of getting on the property ladder but whose mortgage approval would barely buy them an outside toilet.

Molloy, who runs an Instagram account based on the same idea, found herself in just such a position back in 2004, when, with a budget of €110,000, she began to believe she would never be able to afford her own home. But, as she drove around the country, she spotted “bargain-basement bungalows, forgotten farmhouses and cut-price cottages”.

She ended up buying a derelict three-bedroom farmhouse, complete with outbuildings and an acre of land, in Co Tipperary for just €80,000, leaving her enough to get to work on the renovation. “It’s taken me years of hard graft, but today it’s the house I always dreamed of owning,” she says. Her mortgage? Just €280 a month.

That’s the kind of figure Leanne, the young Dublin woman who appears in the opening show of this six-part-series, could only fantasise about. Tired of paying exorbitant rent in the city but with a maximum budget of €100,000, she saw no prospect of ever buying. Then she met Maggie.

Accompanied by her twin, Vanessa, Leanne is taken to four properties in Sligo and Mayo, three of which she likes. The second, a cottage on the market for €39,000, is so run down she seems reluctant to get out of her car.

“This is very ... different,” she says, not even swayed by the quirkiness of the shrubbery growing through the walls. “Open minds, now,” says Maggie, but Leanne is having none of it. “That is a gem for somebody,” Vanessa says when they get back in the car, disappointed by her sister’s lack of imagination. Leanne puts her pedal to the metal, unable to get away fast enough.

The one she falls for in the end is a 200-year-old two-bedroom cottage on half an acre, with apple trees in the garden near Castlebar. With its price tag of just €85,000, half the audience are probably tempted to put in a bid themselves. “It’s very quirky,” says Leanne (box ticked), “and there’s a bird box at the back, which is really encouraging.” She will, she says, definitely consider putting in an offer; she just wants to do some research first.

“It’s opened my eyes to what’s out there for under €100,000,” she says, reckoning home ownership might not be an impossible dream after all. For Maggie, then, mission accomplished.

Catching the Worm: Examining the motivation behind scientific research
5

Donald Clarke: Stop me if you think you’ve heard this one before
9