‘I hate intervals. The overheated hell of the bar. The aimless milling about’ 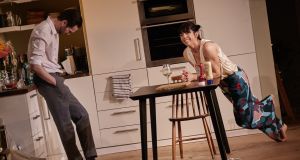 Marty Rea and Eileen Walsh in Beginning by David Eldridge at the Gate Theatre in Dublin. Photograph: Ros Kavanagh

In a recent Irish Times interview concerning Fishamble theatre company’s project to find a “big, new ambitious play for Ireland”, director Jim Culleton described being asked by a playwright whether he “did plays with intervals any more”. The Sunset Boulevard-like implication was that the writer had remained the same size but the plays had shrunk, not just in duration but in scope and ambition. It’s interesting that the shorthand version of this alleged trend was the decline of the interval, a process which has been going on for some time across more than one artform.

Halfway through my ancient DVD of Stanley Kubrick’s Barry Lyndon, the TV screen goes dark and the word INTERMISSION comes up in flowing script. It’s not entirely clear what Kubrick - who oversaw the DVD with typical precision - had in mind for us, the home viewer, here. Are we supposed to shuffle off to the bathroom, or root out some ice cream from the fridge, or find someone to jostle against while necking a warm glass of overpriced white wine? Maybe we should just stand up to stretch our legs and get some blood back into our buttocks before turning our attention to the indecipherable sleeve notes in order to avoid any human interaction. Such are the bleak choices facing the intermission-phobic.

It may not feel that way, but without its intermission Kubrick’s glacial masterpiece is only marginally longer than Avengers: Endgame, packing out cinemas across the world this weekend with nobody crying out for a break in the middle.

The intermission - or interval to you and me - is a threatened species in theatre and an extinct one in cinema. Gandhi in 1982 was the last major release to feature a 10-minute break. Quentin Tarantino’s The Hateful Eight four years ago did not prompt a revival.

In theatre three sometimes contradictory forces seem to be at work in its decline. One is the austere insistence in some quarters that the artist has suffered for their vision, and you should be prepared to endure the same pain. Another is a pragmatic recognition of the fact that people’s lives have changed in recent decades and that it might not be a bad idea to accommodate that fact. And finally there is no doubt that economic realities have played some part in the drift towards smaller, shorter works.

The last two productions staged at the Gate theatre saw the lights go down at half past seven (pretty much universal these days), and come up again shortly after nine. Both plays were intense chamber pieces with small casts - three in The Children, two in Beginning. Both would have suffered from the release of tension, which an interval would have provided. And in any case both were just too short to justify an interval.

I hate intervals. The overheated hell of the bar. The aimless milling about in the auditorium. The stilted conversations (should we talk about this thing we’re at when we’re only halfway through it? No, we bloody should not). Some argue the act of attending a live performance is at heart a social one, and that stripping away the interaction of the interval diminishes the experience. Nonsense. Far better to be done and dusted at a civilised hour, with plenty of time for a convivial post-show chat should you be inclined to have one.

Clearly an interval-free world will never be possible. Certain works will require set and costume changes, or just a chance for the performers to recharge. And many pieces are written to take advantage of the sharp punctuation mark the break provides.

From the audience perspective, there is one strong argument for a break. You could almost hear the bladders tightening in the Gate at the polite announcement that, to respect the actors’ immersion in their performance, anyone leaving the auditorium would not be readmitted under any circumstance. An hour and a half is not a particularly long time to wait, but modern life rarely throws up that challenge elsewhere. It certainly doesn’t apply in cinemas (which also tend to have more comfortable, less bum-numbing seats).

There’s certainly plenty of evidence that Culleton’s playwight’s thesis could be true. The trend towards minimalist monologues or two-handers, despatched within not much more than an hour, is undeniable. Perhaps we’re seeing in theatre the same thing that’s already happened in cinema, a hollowing out of the middle ground, with nothing left between on the one hand the Big Night Out commercial shows, with their merch stalls and multiple refreshment options and on the other a struggling low-budget “indie” sector. That would be a prospect worth putting up with intervals to avoid.