Will Madonna be ‘bullied’ into pulling out of Eurovision in Israel?

The singer faces calls to boycott next month’s contest. But it is impervious to politics 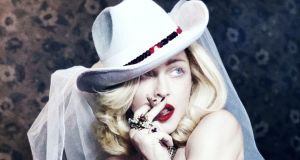 Madonna: the singer has entered a culture war about what pro-Palestinian advocates refer to as ‘apartheid Israel’

It’s not a scene you’ll see in Bohemian Rhapsody, but in 1985 Queen defied a UN ban and played a series of South African concerts in Sun City, the apartheid version of Las Vegas. They got off relatively lightly for their lucrative transgression – within a few months Freddie Mercury was stealing the show at Live Aid. (That bit made it into the movie.) But these things do work differently now the crowd has a voice.

This week Madonna announced she would be previewing two songs from her forthcoming album, Madame X, during the interval of next month’s Eurovision Song Contest, in Tel Aviv. In so doing, she jumped feet first into the trenches of a culture war that has been going on for some time around the issue of an artistic boycott of what pro-Palestinian advocates of the Boycott, Divestment, Sanctions movement, or BDS, refer to as “apartheid Israel”. Pink Floyd’s Roger Waters, a major BDS supporter, immediately weighed in, calling on her to cancel the booking.

The pressure on artists to cut off all contact with Israel has been increasing for years and is generating extra heat as this year’s Eurovision approaches. Reflecting the special position the competition holds in the affections of the gay community, Irish LGBTQIA luminaries including Ailbhe Smyth, David Norris and Kieran Rose wrote an open letter this week to our own Eurovision entrant Sarah McTernan , calling on her to withdraw from the contest and decrying Israel for “pinkwashing,” which they defined as a “PR tactic used by Israel which cynically exploits support for LGBTQIA people to whitewash its oppression of the Palestinian people”.

McTernan, whose entry was chosen by RTÉ in a process so low-key and secretive that if you blinked you missed it, has been wrapped in cotton wool by the broadcaster and you’ll search in vain for any recent quotes from her outside the RTÉ-sanctioned PR bubble.

McTernan is no Freddie Mercury. Tel Aviv is not Sun City. Israel is not South Africa, despite assertions to the contrary. It’s a multiparty democracy which, relative to its size, makes a significant contribution to the world’s intellectual and creative life. It’s also an illegal occupier and brutal oppressor of Palestinian lands and people. And if Binyamin Netanyahu’s next government pursues his stated programme of annexing settlements in the occupied territories, it will have taken a significant step towards justifying the apartheid comparison.

Israel’s spokespeople devalue the meaning of the word anti-Semitism when they apply it to every criticism of their government’s policy. But as recent events in the British Labour Party and elsewhere have shown, there are troubling undercurrents within these campaigns. In her recent book, Antisemitism: Here and Now, Prof Deborah Lipstadt points to the willingness of pro-boycott advocates such as film-maker Ken Loach (who has called on the BBC to withdraw from this year’s competition) to downplay reports of resurgent anti-Semitism across Europe. Lipstadt makes a strong case that Israel is singled out over other human rights abusers.

Activists deny this and say they are responding to a request for solidarity with Palestinians. Zoe Lawlor of the Ireland Palestine Solidarity Campaign said: “Such a call hasn’t been made by people oppressed by other states. Just as it was the right thing to do to respect the call to boycott apartheid South Africa, so it is with the Palestinian call.”

However, some musicians bridle against the apartheid comparison and what they see as a campaign of intimidation. The musical elder lemons Nick Cave and Brian Eno publicly locked antlers over the issue, with Cave saying the boycott “is partly the reason I am playing Israel – not as support for any particular political entity but as a principled stand against those who wish to bully, shame and silence musicians”.

Eurovision remains the creature of the European Broadcasting Union, and its constituent broadcasters, including RTÉ and the BBC, will continue to ignore the pickets and protests. To do otherwise would cause serious political problems for their respective governments.

The actual show will be shameless propaganda for the host country, of course. But the same has been true of other problematic hosts in recent years (Bonsoir, Moscow! Good evening, Baku! ), and the event has managed to shimmy its way through them without too much bother.

The sheer oddness of the event, its combination of 1950s variety show and 21st-century pyrotechnics, sprinkled with a sanitised corporate version of camp, makes it peculiarly impervious to real politics. Madonna of all people would understand.