With the new film’s title and cast due on Thursday, here’s the good – and bad – of Bond on screen 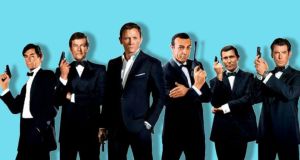 Shaken and stirred: the 007 club

Wrong. Wrong, wrong, wrong. Even a cameo from Orson Welles couldn’t lend lustre to this pointless and unfunny spoof, a dire tongue-in-cheeker that slipped past the franchise control of the franchise’s producer, Eon. David Niven saunters unsexily as the retired “Sir James Bond” in this chaotic film.

Oh lawdy. The Bond franchise was looking lost in the grim and joyless new “war on terror”-era, and this movie featured the worst gadget in the history of 007: an invisible car. What on earth is the point of that? You can almost see the P45 being pressed into Pierce Brosnan’s hand.

This was the turn of the Royal Shakespeare Company stalwart Timothy Dalton. He was supposedly there to give Bond a hard and gritty new seriousness, but he always just looked a bit humourless. This was during the Aids era of sexual restraint, too, so Bond only cops off a couple of times.

Bond goes rogue, and Timothy Dalton stays dull. This one is notable for the young Benicio del Toro as a humble henchman. After this, copyright rows caused a six-year production hiatus during which Dalton quit.

You can hear a whistling and a crackling in the air as Roger Moore begins to tune out. The stunts hold up, but Moore is on the exit ramp, and his flaccid relationship with 24-year-old Carole Bouquet is a deathly embarrassment.

The title is what Sean Connery’s agent should have shouted at him when he was offered the comeback: “Never”! Say “Never”! Again! Connery lumbers back for the remake of Thunderball that no one wanted or needed. He was never a six-pack guy at the best of times, but he’s out of condition here. One to forget.

Much mocked at the time, this film wasn’t as bad as that – despite the silliest title in the series’ history. Daniel Craig is always watchable, and Mathieu Amalric is a very eccentric oddball villain.

Not bad, but some of the fizz has gone. In this film, the distinction between villain and henchman seems to collapse, with three bad guys: Robert Carlyle, Robbie Coltrane and, erm, Goldie, who was very big in those days.

Was it a Bondaissance? A Brosnanaissance? Whatever. The stylish yet assertive Irish smoothie Pierce Brosnan had already made an impression in the TV caper Remington Steele. He took to Bond like a duck to water: virile, cool, nice suits. Judi Dench made her debut as M. Bond was back!

Quite unexpectedly, Roger Moore pulled it back a bit for his last hurrah. (It was also, sadly, the last hurrah for Lois Maxwell’s Miss Moneypenny.) Christopher Walken was always destined to play a Bond villain, and it came to pass in this film, as the evil electronics mogul Max Zorin. A good note for Moore to bow out on.

A whopping, megabudget Bond in its day, clearly influenced by the Star Wars-led sci-fi revival. It is all about the theft of a space shuttle, but this excursion into space can’t conceal the fact that Roger Moore is looking a bit jaded.

George Lazenby’s sole appearance wasn’t a bad Bond. Had he done more, Lazenby might have become a favourite. Diana Rigg played the woman who shows 007 is no commitmentphobe. They marry, before gunfire poignantly restores Bond’s eternal singledom.

Uh-oh. Sean Connery was tempted back to the role with a big pay packet, now looking craggier and toupeed. Ernst Blofeld, boringly played by Charles Gray, wants to use diamonds to focus his space laser. The Bond girl Tiffany Case was played by Jill St John, whose real-life boyfriend, Henry Kissinger, would have been better as the villain.

It took a spanking from Titanic at the box office, but this is a good, underrated Bond: one of the very few films (or plays or books) to satirise Rupert Murdoch and his Chinese expansionist plans – a rather taboo subject in 1990s media. Jonathan Pryce has great fun with the role of the villainous mogul.

This has a well-loved Bond song, Carly Simon’s Nobody Does It Better. It also introduced us to the exotic henchman Jaws. The action opens with that staggering skiing-off-a-cliff stunt, just after Moore is seen supposedly skiing in front of an obvious back projection.

Despite iffy reviews at the time, this has one of the very best villains, wonderfully played by Christopher Lee: Scaramanga, he of the creepy third nipple. It is a preposterous 1970s fuel-crisis drama about a solar-energy device. There are some funky martial arts, too.

An excellent, intelligent Bond that shrewdly expanded the role of Judi Dench’s M, developed her relationship with 007 and created a plausible, sympathetic backstory for him. Javier Bardem got his teeth into the villain role.

And so began the reign of Roger Moore, tacitly conceding the campness that many saw as unavoidable for Bond. Moore was witty, sprightly and a mature 46 when he took over. (Sean Connery had started at 32.) This movie has a great song from Paul McCartney and Wings.

The evil organisation Spectre had its first appearance in Ian Fleming’s Thunderball novel, but we were used to it by now, this being the fourth outing for 007 on the big screen. Good stuff here, but the franchise faltered a bit, with long underwater sequences.

Boom! Daniel Craig and the film’s director, Sam Mendes, bring off a storming 007 extravaganza, kicking off with a head-banging action sequence in Mexico City. Léa Seydoux has a Veronica Lake-type sultriness, and Ben Whishaw almost steals the show as the geeky Q.

Daniel Craig had to face a lot of internet bickering when he was cast, but he blew everyone away with a performance that was just right: cool, cruel, ruthless, yet sardonic. It was great at the time and looks even better now. One of the best Bonds.

Sean Connery’s first outing in the Bond role. It gave us the gun-barrel titles and the Monty Norman theme. There was Ursula Andress in the bikini and the exotic Johnny Foreigner villain with an outrageous island lair.

Weirdly ungadgety and downbeat. Sean Connery searches his hotel room for bugs for what seems like 10 minutes, with the theme music playing deafeningly. There’s a great train fight with Robert Shaw’s Red Grant.

“You eckshpect me to talk?” “No, Mr Bond, I expect you to die!” This introduced us to Bond’s Aston Martin DB5 and the weird spectacle of Shirley Eaton suffocating in gold. It established the convention whereby the villain leaves 007 time to escape some elaborate automated death.

This great action movie put Sean Connery’s Bond right back on top and introduced us to Blofeld, the Nehru-suit-wearing, cat-stroking master criminal Spectre chief played by Donald Pleasence. Connery announced his intention to quit after this. Perhaps he knew it could never be this good again. – Guardian