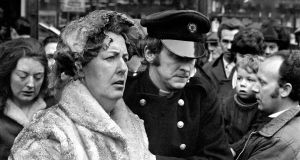 The aftermath of the Abercorn bombing in Belfast in March 1972. Photograph: WATFORD/Mirrorpix/ via Getty Images

My first summer job, at the age of 16, was as a shop girl in the Belfast branch of the fashion chain, Wallis. Back then the brand was so far beyond my price range that it lent the work a specious glamour, even though my duties included vacuuming, door security, cleaning windows, sitting sentinel in delivery lorries, fetching lunchbreak sandwiches and realigning garments on the display rails.

However, my presence by the door was not to deter shoplifters, it was to check the handbags of customers for any incendiary devices that might be concealed in cigarette packets and powder compacts.

I sat proxy-passenger in parked lorries while stock was unloaded not as a precaution against clamping, but because an unoccupied vehicle could be subjected by the military to a controlled explosion; and the careful realignment of the garments each evening after closing time – the patting down of the halter-necks, hot pants and filmy maxi dresses – was not simply sartorial good housekeeping, it was to root out any fire bombs that may have been tucked awaybetween the folds.

In shops all over Belfast kids were routinely performing tasks that only highly trained security personnel would be permitted to do today.

The thoroughfares into the city centre were cordoned off by formidable steel fences, so in order to get to work it was necessary to negotiate turnstiles. Once through, bags, briefcases and backpacks were opened and inspected by a member of the RUC while armed soldiers looked on. It was automatic to raise one’s arms in response to a curt command, and to allow oneself to be frisked.

No cars were admitted – the shopping streets of the capital were pedestrianised long before it became commonplace in other cities, but we teenagers learned to drive as soon as it became legal for us to do so. At weekends we would commandeer our parents’ cars and drive 20 miles to the nearest disco, for there was no disco in central Belfast; there were no cinemas or theatres, there was no nightlife at all. The turnstiles were locked and it became a no-go area. Even a trip to a suburban cinema could be aborted in the event of a bomb scare – one such was occasioned by a friend who had inadvertently parked her car in a restricted area and found it surrounded by a bomb disposal team after the cinema had been evacuated.

In 1972 the coffee-shop my sister frequented, the Abercorn, was destroyed in an explosion that injured 130 people and left two dead. That same year I spent four frantic hours waiting to hear from my mother after 20 bombs (most ofthem car bombs) exploded one after another on Bloody Friday, injuring 130 people and killing nine. My father’s favourite pub was bombed three times.

Bomb scares disrupted our schooling. We would be herded to the playing fields across the road where we’d sneak off for a fag behind the science block until the all-clear was given. We studied for our A-levels by candlelight during the Ulster Workers’ Council general strike in 1974, and walked to school – six miles there and back – because there was no public transport.

One day as we dawdled homeward along the Annadale Embankment, my friend tripped over an object protruding onto the footpath from the adjacent overgrown verge: it was the butt of a rifle belonging to a soldier, on his belly in the grass. He cursed, turned pale and burst into tears as we turned to him, indignant but unfazed.

Nothing really fazed us. The Troubles were just part of our life, growing up. The bomb scares, the evacuations, the windows crosshatched with masking tape so that they wouldn’t shatter if a bomb went off. The dull sound of explosions, the kicky gunshots, the helicopter rotor blades overhead that kept you from sleeping night after night. The detours, the army check points, the armoured cars. The daily news coverage: knee-capping, tarring-and-feathering, copy-cat killings. The watch towers, the bombs on the train line between Dublin and Belfast that meant we all had to disembark and finish the journey by bus, the “pull over, please”. The funerals.

That was what daily life in Northern Ireland was like for many middle-class, middle-income, politically median families. None of my friends were church-goers, so religion was never an issue for us; and as the British syllabus was the template for our O- and A-level history, the sectarian complexities were never made clear to us.

None of us attended political rallies – we were likely nowhere near as “woke” as most of today’s teenagers. But back then if you wanted to make a difference politically, it meant putting your head over the parapet and becoming implicated in the bloody conflict; no matter how peripheral the involvement, there was a real chance of inviting terror into your life and as a consequence, the lives of your parents, your brothers and your sisters.

That’s why my three siblings and I left Belfast in the 1970s and never went back.

The ever-present threat of violence contaminated all aspects of life: work, domestic and social. That’s why – after all these decades – on seeing the banner headlines about the murder of Lyra McKee in Derry emblazoned across last week’s newspapers, I felt such a sickening sense of déja vu.

Kate Thompson, who also goes by the pen-name Kate Beaufoy, is a novelist and former actress. katebeaufoy.net