How to deal with life’s setbacks? Think like a Stoic

Unthinkable: The Roman Stoics might just have the answer to all your problems in a ‘convenient’ heavenly fiction 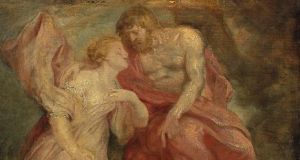 Venus and Jupiter by Sir Peter Paul Rubens. Seneca argued that, since the gods controlled all human affairs, experiencing a setback was a flattering sign that you’d caught their attention.

Hardcore atheists like to say there’s as much evidence for God as there is for Santa Clause or the Easter Bunny. But what if there was a god, or a collection of gods, who could make you a calmer, better person, as well as helping you to think straighter and approach problems more objectively. Shouldn’t you believe in that god?

William B Irvine thinks so. Part of a growing band of philosophers popularising Stoicism, Irvine highlights how this ancient school of thought pre-empted many aspects of modern psychology.

Seneca, the first century Stoic figurehead, made a clear distinction between experiencing a setback and suffering from it. In a textbook case of reframing – what therapists call approaching a situation from a new perspective – Seneca encouraged his followers to view impediments positively. Since the gods were assumed to control all human affairs, if you fell ill or lost your fortune it was evidence that you’d caught the attention of deities; it was Jupiter’s way of testing your character.

“We should therefore be flattered if we encounter setbacks,” explains Irvine, taking up where Seneca left off.

But, hang on, the Stoic gods don’t exist! True, says Irvine, describing them as “a convenient fiction”.

“Those who feel uncomfortable thinking in terms of even imaginary gods can take themselves to be tested by, say, an imaginary father, general, teacher, or coach,” he adds.

“Indeed, on occasion, I take myself to be tested not by Stoic gods by the ghost of Seneca. And in a deeper sense, the ghost of Seneca does exist. Because I have read his works, Seneca haunts my intellect, occasionally offering me a compliment but much more often raising his ghostly eyebrows at me in a look of dismay.”

How does experiencing a setback differ from suffering one?
William B Irvine: “Life is full of setbacks. Some are minor, like stubbing your toe or running out of toothpaste; some are midsized, like breaking a leg playing football; and some are major, like going blind.

“The Stoics’ realised that even though you have limited control over what setbacks you experience, you can develop considerable control over how you respond to them.

“You can allow yourself to become frustrated, upset, or worst of all angry. Do this, though, and you dramatically increase the harm done to you by the setback. Fortunately, there is another option. With a bit of thought and effort on your part, you can take setbacks in your stride.”

“We can accomplish this by imagining that it is ‘Stoic gods’ who are responsible for our setbacks. Through this simple expedient, we can keep our animal component at bay. Instead of getting angry, we focus our attention on the problem at hand. By doing this, we simultaneously develop character and gain skill in dealing with setbacks, and thereby can better manage the setbacks we experience in the future. We become, in other words, tougher, calmer, and more resilient.

“A Stoic who has developed his ‘setback game’ might actually look forward to being set back and will embrace any setback that comes his way. He knows that in the absence of setbacks, people get soft and complacent, meaning that when they finally do encounter a setback – as they invariably will – they might feel traumatised.

“Even stranger, a Stoic might, as part of his setback training, go out of his way to do things in which he is likely to experience minor-to-middling setbacks. He might, for example, go on an adventure hike or travel to a land in which he is unfamiliar with the language and customs. By dealing with the resulting setbacks calmly and effectively, a Stoic can polish his setback-response skills.”

Is Stoicism a comprehensive philosophy, or something that can be incorporated without contradiction into very different political and religious faiths?
“Stoicism, and in particular the form of the doctrine practiced by the Romans – people like Marcus Aurelius and Seneca – is best characterised as a set of psychological tools rather than a moral philosophy. This means that people of all religious faiths and political persuasions can put it to work.

“Notice, in particular, that those who don’t like thinking in terms of imaginary Stoic gods as the source of their setbacks can instead think in terms of an imaginary teacher or coach.

“Do you want to take the sting out of life’s setbacks? Even better, do you want to profit from them instead of letting them ruin your day? Then you should explore the strategies developed by the ancient Stoic philosophers. You don’t need to have mastered Stoic philosophy to employ these strategies, and you will very quickly find out whether they can make a difference in your life.”

Seneca replies: “We are bad men living among bad men; and only one thing can calm us – we must agree to go easy on one another.”