Has the Great British Bake Off finally fallen flat?

All the ingredients for a cuddly, feel-good vibe are there, but something still tastes off 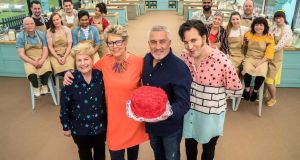 The Great British Bake Off is, essentially, The X Factor for people who would never dream of watching The X Factor.

Ask anyone who has baked even a basic fairy bun, and they’ll tell you that if you tamper with a baking recipe with so much as a pinch extra, science will send the whole thing straight to hell in a picnic basket.

And yet the show has managed to successfully shake off some fairly seismic changes. After a reported (and hair-raising) £75 million deal in 2016, the show changed hands from being Auntie’s favourite at the BBC to a major gamble for Channel 4.

Yet with the departures of Mary Berry, Mel Giedroyc and Sue Perkins, and the ushering in of comedians Noel Fielding and Sandi Toksvig, the gamble seemed to have paid off.

Except . . . well, Bake Off has gone a little off the boil this year, no? This year’s series, its 10th, saw the lowest viewing figures for the show’s opening episode in six years, with an average of 5.7 million.

Another change was afoot this year; around half of the show’s contestants have been their 20s, and the average age of the group at the outset of the series was 31.

A fashion designer, a 20-year-old student and a fitness instructor got to grips with sponges, sourdoughs and showstoppers. A move, no doubt, to inject new life into the GBBO franchise, but the result has been a bit . . well meh.

Besides, the ingredients are all a little off-kilter. This year’s Insta-savvy contestants have been a bit too knowing; more than a little aware of the spoils that often await at the end (in terms of post-show career opportunities, that is; not the nice things that come out of the oven). Not unlike every other reality TV contestant, then.

And, ten series in, double entendres about soggy bottoms and the like were once integral to the show’s charm, but have long passed their sell-by date.

“I was definitely flirting with the bottom there. I was giving the bottom a cheeky wink,” noted one contestant, Michael. Genuinely, spare me any more bottom chat.

Yet in an effort to stave off staleness, there have been shock eliminations in GBBO.

Earlier this month, fan favourite Henry was eliminated in the quarter-finals, despite securing the coveted “Hollywood handshake” (another device that’s surely in the Autumn of its years).

This week, and after seeing off 10 other contenders, the series finalists – Alice, David and Steph – were revealed. They’ve had to overcome technical challenges, dastardly heat waves and Noel Fielding blathering in their ear all season, yet many on Twitter were decidedly unimpressed. The feelgood factor that has frosted the previous series appears to be at large.

“Yeahhhh I’m still not bothered about these people in the final,” one viewer tweeted. “I’m really not invested in any of the final 3,” tweeted another.

It wasn’t always like this, of course. A true outlier in the supposed golden age of television, Bake Off managed to spawn a number of imitators. There was the Great Allotment Challenge, hoping to do for blooms what Bake Off did for buns.

BBC’s Great Pottery Throw Down showed to an average audience of two million on the BBC in 2015. See also, the Great British Sewing Bee and the Great British Garden Revival. None of them have managed to scale Bake Off’s dizzying heights, mainly because catching lightning in a bottle isn’t something that happens twice.

Yet back in 2010, TV delighted in being tough, and onyx-black. There was the cutting comedy of The Office, the cut-throat corporate sheen of Mad Men, the gore of The Sopranos.

We didn’t know it at the time, but we were crying out for a homespun show that was a bit like being at your granny’s. And compared to a period drama like Mad Men, GBBO costs relatively little to make. All you need, when you think about it, is a tent, some bunting, and a heap of working ovens.

Cooking, making and DIY shows have long been hardy perennials in the TV schedules, not least in the ’50s and ’60s when eating out was a guilty luxury.

Time once was that Bake Off was a jolly, gentle respite from the usual gladiatorial reality TV competitions. Contestants were certainly sent home (“home”, in reality TV parlance, being the worst, most hellish place you could encounter), but it never felt cruel, or sorrowful.

Most contestants left with a smile and a wave. But not this year. Now, they seem genuinely deflated by Prue Leith and Paul Hollywood’s feedback, which appears that bit more Cowellian and jagged this year. There’s even been a double elimination, for God’s sake. As in every other reality show, ‘home’ is the last place the contestants want to be.

This is where the show has ultimately lost it way. In the usual run of things, Bake Off is just so darned sweet, and not just because of the meringue nests. Its setting, for starters, is a bunting-clad tent, giving it the benign yet aspirational feel of Bloom, or a country fair.

It’s like a hugely glamorous farmhouse, a charming fairy-tale: the cottage in Hansel & Gretel, with added Smeg fridges. Everything about it is gentle; the tone, the pacing, the pastel shading, the action.

For years, there was little sense that the lives of hopefuls had come to a shuddering halt. It was, very simply, a lot of nice, unassuming people knocking together some very impressive cakes. One of them was that bit better than the others, and therefore won.

About the worst thing that could happen to a contestant in previous years is that a soufflé didn’t rise, or a great profiterole tower shaped like Big Ben started to sag a little. Let’s not underestimate the psychologically comforting qualities of cake, either. It evokes Sunday afternoons in the family homestead, watching a mum or grandmother put together her famed scones/Victoria sponge/butterfly cakes.

Some say that Bake Off’s success in recent years has more than a little to do with timing. It makes people feel good, at a time when bad news comes at us like a vicious wave. Life for many people is hard, between bills, mortgages, rising rents. It stands to reason that comfort TV would become the drug of the nation.

Watching a silver fox and a woman in a snazzy necklace appraise buns and bread is the soporific antidote to life many never even knew they needed. Bake Off is, essentially, The X Factor for people who would never dream of watching The X Factor.

But even Simon Cowell himself has discovered that there’s a fine line between resuscitating a tired reality TV format and tinkering with it until it falls apart in your hands. Bake Off’s brains would do well to ditch the wacky challenges (hello? Dairy Week?) and stick with nods to the great classics. It’s a more effective tactic than any of us could ever have imagined.