Kanye West: ‘Some people drown themselves in drugs, I drown myself in sex’ 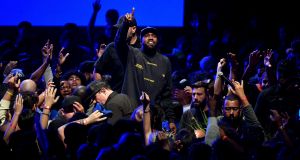 Kanye West performs onstage during his Jesus Is King album and film experience at The Forum, in Inglewood, California, on Wednesday. Photograph: Kevin Winter/Getty Images for ABA

Kanye West has predicted he will one day be president of the US as he defended his support of Donald Trump. The controversial rapper and fashion designer made the comments ahead of the highly anticipated unveiling on Friday of his latest album, Jesus Is King.

West, who has attracted criticism for wearing a MAGA (Make America Great Again) hat and saying he and Mr Trump “are both dragon energy”, said in an interview with Zane Lowe for his Apple Music Beats 1 show that he will not be forced into not sharing his opinions.

The 42-year-old also revealed plans for a future presidential run.

He said: “There will be a time when I will be the president of the US and I will remember... any founder that didn’t have the capacity to understand culturally what we were doing.”

West revealed he was exposed to pornography from a young age and said he was addicted to sex following the death of his mother in 2007. Donda West died at the age of 58 after undergoing cosmetic surgery and her death had a profound impact on the musician.

“Some people drown themselves in drugs, and I drown myself in my addiction: sex,” he said.

West, a multiple Grammy Award winner, is one of the most successful and influential artists of the 21st century. Jesus Is King, his follow-up to 2018’s Ye, will be released on Friday amid fierce anticipation.

West, who owns the Yeezy fashion line with sportswear giant Adidas, was taken to hospital in Los Angeles in November 2016, reportedly suffering from stress and exhaustion. Reflecting on his struggles with his mental health, he said: “We’re making this money but I’m still ending up in debt.

“My public standing is all in shambles, I’m not in good shape, I’m having ups and downs with my health, people calling me crazy, people not wanting to sit and meet with me, all this is happening and I had to give it all up to God.”

West began his career in music as a producer, providing Jay-Z with several songs. Asked by Lowe if he enjoyed his work more now or then, West replied: “I quite enjoy the sound of my own voice and apparently by the streams billions of other people do too.”

West, who has four children with his wife, the reality TV star Kim Kardashian West, also spoke about the relationship between drug use and alcohol.

Asked if he was OK with musicians using drugs in his studio, West said cannabis would be fine for medicinal purposes but drew the line at harder narcotics.

“We never have people doing hard drugs in our studios anyway,” he said. “I’ve never seen anyone doing cocaine in a studio of mine.”

And comparing himself to famed Serbian-American inventor Nikola Tesla, best known for his work with electricity, West said: “Similar to Tesla, I’m about lighting the world up.”

And in a typically grandiose statement, West said: “I am unquestionably, undoubtedly the greatest human artist of all time. It’s just a fact.”

Asked if he had managed to “find peace” with the challenges in his life, including the death of his mother, West said: “I’m at peace. I give it all up to God.”

Jesus Is King will be released on Friday. – PA

Bored in isolation? Two women go to a lot of effort to recreate famous film characters