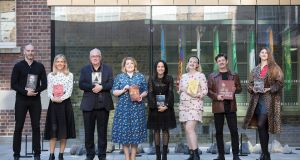 The shortlists for this year’s An Post Irish Book Awards were proclaimed at the GPO on Dublin’s O’Connell Street on Thursday, with a substantial cohort of Ireland’s standing army of writers present to hear their names called out on the roll of honour.

Maria Dickenson, chairperson of the awards, said: “This year’s shortlist is once again a terrific testament to the breadth and depth of Irish writing talent. The Irish Book Awards are proud to celebrate the diversity of Ireland’s rich literary culture, and the achievements of all that contribute to this success – including writers, readers, publishers, booksellers and librarians.”

In a strong year for Irish fiction, the race for the coveted Novel of the Year prize looks neck and neck. For a domestic prize, it has an international stamp, with settings ranging from southern Spain to Nigeria, London and the United States, as well as rural Ireland. The strong field features Kevin Barry’s Booker longlisted Night Boat to Tangier; Girl by Edna O’Brien; Shadowplay by Joseph O’Connor; This is Happiness by Niall Williams; The Narrow Land by Christine Dwyer Hickey; and The River Capture by Mary Costello.

That the judges felt Belfast author Jan Carson’s The Fire Starters was an also-ran is a very puzzling decision.

If sales are anything to go by, Emer McLysaght and Sarah Breen, last year’s winners of the Popular Fiction Book of the Year prize, should be dead certs to be crowned again for their No1 bestseller Once, Twice, Three Times an Aisling. However, When All is Said by Anne Griffin, who is also shortlisted for Newcomer of the Year, made a huge splash at the start of the year, while Cecelia Ahern, having recently celebrated the birth of her child, could have another offspring to toast if Postscript, her sequel to PS I Love You, truimphs next month. Paul Howard, the longevity and popularity of whose Ross O’Carroll-Kelly series must fill the Aisling authors with hope, will be hoping to have better luck with Schmidt Happens than the Irish rugby team did in Japan. The shortlist is completed by the popular and well-reviewed Filter This by Sophie White and Seven Letters by Sinéad Moriarty.

There is a strong Irish Times presence on the Non-Fiction Book of the Year shortlist, with Rosita Boland’s essay collection, Elsewhere, joined by Fintan O’Toole’s Brexit demolition job, Heroic Failure, and columnist Diarmaid Ferriter’s The Border: The Legacy of a Century of Anglo-Irish Politics. Constellations by Sinéad Gleeson, another powerful essay collection; Republic of Shame by Caelainn Hogan, a young writer’s study of the legacy of Magdalene laundries; and Samantha Power’s political memoir, The Education of an Idealist, complete an impressive shortlist.

(Auto)biographies dominate the Popular Non-Fiction Book of the Year, ranging from heroism in the face of adversity (Overcoming by Vicky Phelan with Naomi Linehan and Live While You Can by Fr Tony Coote) to musical memoirs( My Crazy World by Christy Dignam with Damian Corless and Barefoot Pilgrimage by Andrea Corr) and fighting crime (The Making of a Detective by Pat Marry). The Personals by Brian O’Connell, a charming and moving look at the world of personal ads, bucks the trend.

It’s been a big year for Irish crime with major prizes, book deals and TV adapatations. The Wych Elm by Tana French, whose Dublin Murders is currently being aired on RTÉ and BBC, is up for Crime Fiction Book of the Year along with Twisted by Steve Cavanagh, this year’s winner of Theakston Old Peculier Crime Novel of the Year. Also listed are The Chain by Adrian McKinty, which won him a six-figure US book deal, Rewind by Catherine Ryan Howard, who has signed a major six-book US deal; Cruel Acts by Jane Casey; and The Hiding Game by Louise Phillips

Gaelic football, soccer, rugby, hurling, rowing and marathon running all feature in the race for Sports Book of the Year. The shortlisted titles are About That Goal: The Official Autobiography of Seamus Darby with PJ Cunningham; Recovering by Richie Sadlier with Dion Fanning; All In by Jamie Heaslip with Matt Cooper; Something in the Water: How Skibbereen Rowing Club Conquered the World by Kieran McCarthy; Camouflage: My Story by Eoin Larkin with Pat Nolan; The Dublin Marathon: Celebrating 40 Years by Sean McGoldrick. Strangely, In Sunshine or in Shadow: How Boxing Brought Hope in the Troubles by Donald McRae, shortlisted for the William Hill Sports Book of the Year in Britain, is another title held up at the Border.

Toffee by Laureate na nOg Sarah Crossan, who recently signed a huge deal for her afult fiction debut, is shortlisted for Teen / Young Adult Book of the Year along with All the Invisible Things by Orlagh Collins; Perfectly Preventable Deaths by Deirdre Sullivan; Other Words for Smoke by Sarah Maria Griffin; The M Word by Brian Conaghan; and All the Bad Apples by Moïra Fowley-Doyle.

An Post CEO David McRedmond said: “One of the best things about the shorter, colder days and approaching winter is the An Post Irish Book Awards and having more time to get stuck into lots of books from this excellent shortlist of exciting and diverse authors. This year, we want even more people of all ages and interests to read more books, more often so you’ll be seeing our #ReadersWanted activity and events in all kinds of places over the coming weeks and months. Good luck to all the shortlisted authors.”

An Post, in its second year as sponsor, has launched its #ReadersWanted campaign, encouraging everyone to pick up more books, more often. The public are being asked to vote online for the best books of the year at anpostirishbookawards.ie. by November 13th. The winners will be announced at the gala ceremony in the Convention Centre Dublin, Spencer Dock, on November 20th. Highlights, presented by Miriam O’Callaghan, will be broadcast on RTÉ One on November 23rd.

The An Post Irish Book Awards 2019 shortlist is as follows:

Non-Fiction Book of the Year
Elsewhere by Rosita Boland (Doubleday Ireland)
Heroic Failure by Fintan O’Toole (Head of Zeus)
Republic of Shame by Caelainn Hogan (Penguin Ireland)
Constellations by Sinéad Gleeson (Picador)
The Border: The Legacy of a Century of Anglo-Irish Politics by Diarmaid Ferriter (Profile Books)
The Education of an Idealist by Samantha Power (William Collins)

Sports Book of the Year
About That Goal: The Official Autobiography of Seamus Darby by Seamus Darby with PJ Cunningham (Ballpoint Press)
Recovering by Richie Sadlier with Dion Fanning (Gill Books)
All In by Jamie Heaslip with Matt Cooper (Gill Books)
Something in the Water: How Skibbereen Rowing Club Conquered the World by Kieran McCarthy (Mercier Press)
Camouflage: My Story by Eoin Larkin with Pat Nolan (Reach Sport)
The Dublin Marathon: Celebrating 40 Years by Sean McGoldrick (The O’Brien Press)