Can you really love a dog? and life’s other big questions

Unthinkable: You can do philosophy anywhere. Even while walking your dog 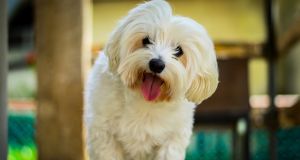 “It’s only recently that we thought animals should be treated with respect and dignity and not tormented.” Photograph: iStock

Western civilisation has been slow to take seriously the suffering of animals. For “slow” read thousands of years, and yet we’re only starting to get there.

As author Anthony McGowan points out, “there are no ancient Greek philosophers who think we have any responsibilities to animals at all – and that carried on for most of western history. It’s only recently that we thought animals should be treated with respect and dignity and not tormented”.

McGowan, a successful English fiction writer for children and young adults, has been taking a closer interest in the topic since he got a pet dog, a scruffy Maltese terrier called Monty.

Why is it an insult to be called a dog? Can you really love a dog? What is Monty thinking about exactly?

These are among the many searching questions McGowan asks himself in How to Teach Philosophy to Your Dog, which is published this month.

He has “two overlapping audiences in mind: people who want to begin to understand philosophy, and pet owners – who I thought I could entice with my doggie stories” into what he calls “rather complicated and difficult” territory.

McGowan, who has a PhD in philosophy, reconnected with the subject while taking long walks with his dog. “As I traipsed over the paths and graveyards of north London I tried to remember everything that I’d learnt and give it a kind of order, and sometimes I’d say it out loud to Monty.” The conceit of the book is an imaginary dialogue that ensues as man and dog grapple with everyone from Plato and Immanuel Kant to Bishop George Berkeley and Arthur Schopenhauer.

Explaining the project further, McGowan says: “I was determined not to use too many bad dog puns.” In this he fails – he reserves biting criticism for the “rather dog-matic” Aristotle, and that’s just the start of it – but the occasional ruff joke can be forgiven in what’s a highly entertaining and original way of conveying the history of western philosophical thought.

You mention at the outset of the book how the cynic Diogenes revelled in being called a dog – so much so that he raised a leg and pissed on one of his critics. Which philosopher is best when it comes to thinking about dogs?
Anthony McGowan: “Weirdly, Schopenhauer – who was a genuinely horrible man – was very, very fond of animals. He was an early advocate for animal rights. It’s weird how he both hated humans and loved animals.

“He’s one. Also, one of the key developments of the past 100 years in ethics is suddenly people began to think of animals as having rights as well – a lot of recent utilitarian philosophers in particular.”

A contentious issue is whether animals should be regarded as property. Do you own Monty?
“There is a legalistic answer to that. You are responsible if your dog causes actual damage. So the legalistic answer is yes, you own your dog.

“I was never really a dog person. I never really understood the devotion people had for their pets, but the truth is, whether you want to, unless you’re a monster, you end up loving your dogs, and that love seems to trump any issue of ownership.”

If a dog poos in the woods, and no one sees it, did it happen?
“Obviously, Berkeley thought it would happen because God would always be there to see the poo. But in terms of practically having to deal with dogs in the woods I very much want to avoid the use of plastics. So if Monty poos in the woods I bury it, as opposed to on the street.”

Did your relationship change with Monty as you incorporated philosophy into your walks?
“The more I gave Monty a personality the more it became impossible not to read that personality in him in real life. Now he is a much more philosophical dog than I thought at the beginning.

“There is a complex interaction between a pet owner and its animal. As an owner you read into animals things that are not there. Maybe we do that in people too.”

The book grapples with big issues like “the meaning of life”. Do you feel as though you reached a resolution with Monty?
“In terms of the history of philosophy, one of my main jobs was to get it all straight in my head: roughly who thought what in what historical period, and following that threat through the different philosophers.

“One of the points I was trying to get across was to think about life having a meaning is probably the wrong way to look at it. Certain things have a meaning, like mathematical propositions. Human life hasn’t got a meaning. What it has is a value. And trying to find a meaning is a kind of hopeless quest.

“I was hoping in the last few chapters to get that across, and also offer other ways of seeing it. I particularly like this idea of Schopenhauer’s that life is a soap bubble that you blow out. It’s a beautiful and magical thing that doesn’t mean anything beyond itself – it’s just a thing of beauty – and then it pops.”

ASK A SAGE
Question: Beef or salmon?
Arthur Schopenhauer replies: “The assumption that animals are without rights and the illusion that our treatment of them has no moral significance is a positively outrageous example of western crudity and barbarity. Universal compassion is the only guarantee of morality.”