Does philosophy belong to the academy or the community?

Unthinkable: Plato need not intimidate – if you’ve got a good philosophical facilitator 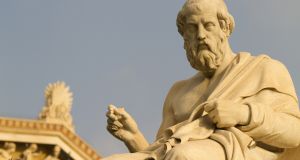 A grounding in mathematics was necessary to join Plato’s Academy.

Philosophy, like all activities, has its sticklers, elitists, gatekeepers and snobs. There’s a certain type of corduroy-wearing university don who bristles at the notion that anyone can be a philosopher. Either philosophy has some standards or it’s good for nothing, the argument goes.

True enough, Plato didn’t accept any old riffraff into the Academy; a grounding in mathematics – an aid to logic – was a prerequisite. Being able to quote a bit of Nietzsche no more makes you a sage than playing a few chords makes me a musician.

Yet there’s a type of philosophy that can be characterised as universal. Advocates call it community philosophy: a grassroots enterprise typically driven by enthusiastic and open-minded practitioners. In an Irish example, TCD lecturer Rob Grant last year teamed up with Senator Lynn Ruane, who studied philosophy at Trinity, to run a series of Socratic dialogues and ethical workshops in Rialto, Dublin with local community activists.

In their recently published book Philosophy and Community: Theories, Practices and Possibilities (Bloomsbury), UK academics Amanda Fulford, Grace Lockrobin and Richard Smith make the case for scaling up this kind of endeavour. Philosophy inoculates against tribalism, they argue, and it raises the quality of public debate.

But is meaningful philosophising even possible given our current modes of communication? Fulford, Lockrobin and Smith together answered the questions for this week’s Unthinkable.

How does “doing philosophy” in the community differ from the everyday dialogue that takes place in coffee shops or on social media?

“There will be some occasions when the two might be indistinguishable. Philosophical conversations can arise naturally out of the application of basic thinking skills to the problems thrown up by everyday life experience. But for the most part community philosophy differs from these kinds of informal, spontaneous, free-flowing and often unfocused conversations in a few obvious ways.

“We expect that the contributions made in such dialogues should be cogent, well-reasoned, non-contradictory and consistent with our other views.

“Community philosophy promotes this discipline through the establishment of conventions or rules and through the assistance of a facilitator, whose role isn’t to supply the answers for the group. Community philosophy recruits a group of thinkers who intend to philosophise together under these conditions, perhaps because they seek a better understanding of a particular philosophical question, or out of a more general desire to become better thinkers, or both.”

Philosophy by the community sounds rather collectivist. Is there a danger of it lapsing into groupthink?

“Community philosophy is a collective practice; it is a dialogue in which the thoughts of individuals are exchanged, contrasted and intertwined in the hope that this will help refine the thinking of everyone.

“Yet, just because it takes place in a group doesn’t mean there is an expectation that the group will think the same on a given topic or that any consensus will be reached. In fact community philosophy is rather inhospitable to groupthink because critical thinking is such an integral part of the approach. Lazy consensus is something a facilitator seeks to head off by stirring debate.

“Community philosophy’s aim is not for participants to emerge speaking with one voice, but to emerge as better thinking individuals who recognise how their own views differ from, or are shared by, others. Accepting that everyone has the potential to philosophise is not the same as claiming that every philosophical argument or claim is as good as any other.”

Believing everyone is capable of valid philosophical insights requires a democratic or pragmatic outlook – the kind of outlook the educational reformer John Dewey had. To support community philosophy, then, do you need to be a pragmatist to start with?

“The pragmatist perspective certainly helps us appreciate the historical and theoretical foundations of some forms of community philosophy. It also helps us assess its value as William Pamerleau argues in our volume.

“For philosophers like John Dewey and Richard Rorty, the kinds of conversations constitutive of community philosophy ‘broaden our individual perspectives and increase our sensitivity to the humanity of others’. Consequently, even if these conversations don’t promote broad consensus or the resolution of problems, ‘there is still reason enough to keep the conversation going’.

“But this does not mean that one must ‘be a pragmatist’ to participate in community philosophy in the first place. Many practices are theorised in terms that the participants may not understand or agree with. In a public philosophical conversation, competing epistemologies may be explicit in the contributions of discussants, but what is more likely is that they will be implicit, or absent all together.

“Community philosophy typically starts from where the participants are at, wherever that is, intellectually, temporally and spatially.

“The entry requirements for participating in community philosophy are actually far more basic. What is necessary is the willingness to think and to communicate that thinking: so participants need to have sufficient conscious awareness, cognitive capacity and language to formulate thoughts in response to the contributions of others.

“Even if a person is very young or old, has sensory impairments, learning disabilities, behavioural challenges or speaks a different language, they can access philosophical dialogue with the right support as some of the cases in the book hope to demonstrate.

“When we ask questions such as: ‘What makes me, me?’, ‘Is there anything more important than happiness?’, or ‘Should I be afraid to die?’, we are asking questions that almost any professional philosopher – past or present – would recognise as philosophical.

“These are also questions that almost any human being could begin to address.”

There is growing interest in philosophy for children (P4C) but it’s still on the fringe of most educational systems. What’s stopping philosophy from becoming a mainstream school subject internationally?

“We wish we knew! One suspicion we have is that neoliberal priorities have skewed education policy towards science, technology, engineering and maths as drivers of capitalism. The arts and the humanities more generally, and philosophy specifically, do not fare well on the metric of money making.

“The question we really need to ask is what is education for children and for adults ultimately for? But this is, of course, a philosophical question and the more philosophy is devalued, the less well-equipped each new generation is to answer this question for themselves – to see beyond the narrow economic argument and towards bigger picture in which making music, playing sport and doing philosophy together are vital parts of education and a life worth living.”

Are TED talks a waste of time?

Seneca replies: “Lectures prepared beforehand and spouted in the presence of a throng have in them more noise but less intimacy…When the aim is to make a man learn and not merely to make him wish to learn, we must have recourse to the low-toned words of conversation.”