FF, FG and Greens carve up ‘Taoiseach’s 11’ nominees to Seanad

Northern Ireland to be represented in Seanad under deal between parties 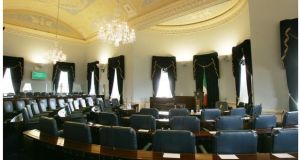 The 11 appointed senators are known as ‘the Taoiseach’s 11’.

A Northern Ireland nominee will be appointed to the Seanad if the coalition deal agreed by Fine Gael, Fianna Fáil and the Green Party is supported by the parties’ membership.

The break-down is akin to a soccer team formation - four, four, two and one - for the 11 Senators to be appointed to make up the Seanad’s full complement of 60. The 11 are known as “the Taoiseach’s 11”.

Fine Gael and Fianna Fáil are expected to choose four Senators each while the Green Party will get to decide two nominees and the three parties will agree a Northern Ireland representative.

Nominating a northerner is a long-held but intermittent tradition. In the main they have been unionist voices including peace activist Gordon Wilson, retired doctor John Robb and writer Sam McAughtry but have also included former SDLP deputy first leader Séamus Mallon who served briefly in 1982 and former Northern Ireland Ombudsman Maurice Hayes.

Mentioned in dispatches is Derry woman Emma De Souza who won a political and legal battle to ensure Northern Ireland citizens will be regarded as EU citizens for immigration and family unification purposes.

She rejected a British Home office requirement that she must renounce British citizenship before being able to rely on rights to Irish citizens in the Belfast Agreement to seek residence rights for her US-born husband.

Also in contention is unionist and former president of the Ulster Farmers’ Union Ian Marshall who won a Seanad byelection in 2018 with cross-party backing including that of Sinn Féin but was unsuccessful in the Seanad general election.

After that it will be a nightmarish task to pick nominees for the Seanad from hundreds of applicants.

Fine Gael had an embarrassing Seanad election when no women won seats and Taoiseach Leo Varadkar pledged that most if not all of the party’s nominees will be female.

However there is speculation former TD Noel Rock who lost his Dublin North West seat may be the one male selection. Some in the party oppose his preferment, demonstrated in his poor showing in the Seanad election. The colourful politician lost his seat in part because the constituency boundary changed and there are no party councillors there now but critics say it became the Noel Rock rather than the Fine Gael organisation.

A Seanad seat “is hers for the asking” according to some sources when asked about Minister for Social Protection Regina Doherty who lost her Dáil seat. But she is also mentioned as a frontrunner for the powerful role of party general secretary when incumbent Tom Curran retires.

Cllr Mary Seery Kearney based in Templeogue Dublin is expected to get the nod for the Seanad to build a profile to win back a Dublin South-Central seat.

Cllr Aisling Dolan who performed well in the Seanad election is also on the radar for Roscommon-Galway where there is no Fine Gael TD.

Some have mentioned Salthill Cllr Clodagh Higgins a sister of former Labour senator Lorraine Higgins while a further prospect is Castlebar Cllr Donna Sheridan after former senator Michelle Mulherrin decided to step back. Meath East Cllr Sharon Tolan who performed well in the Seanad election has also been mentioned.

The well regarded former Limerick senator Maria Byrne who lost out in the Seanad election may struggle to be selected with sitting TD Kieran O’Donnell in place in the city.

Taoiseach Leo Varadkar is not expected to nominate former high profile TD Kate O’Connell although he has been known to surprise. Critics of the outspoken politician acknowledge that “whether you like or dislike her” she would be an articulate, intelligent and questioning voice for the party in the Upper House.

Fianna Fáil has received “tens of dozens” of requests for a prized nomination. All eyes will be on whether former Clare Fianna Fáil TD Timmy Dooley will get the nod after his party colleague Cathal Crowe took the Dáil seat in the county. He also failed to get elected to the Seanad which some attribute in part to his poison chalice role as director of elections in previous Seanad elections.

Former Cork South-West TD Margaret Murphy O’Mahony, a staunch campaigner for the disability sector is in the frame while former Louth TD Declan Breathnach has also been mentioned. Both lost their Dáil seats and were unsuccessful in the Seanad election.

Long-time Cllr Mary Fitzgerald could be considered for Dublin Central where the party has no TD while Cllr Deirdre Heney polled well in Dublin Bay North and Shay Brennan, son of former minister Séamus Brennan came close to a seat in Dublin Rathdown.

Lorraine Clifford-Lee who lost her Seanad seat has been mentioned as the party looks at two seats for Dublin Fingal next time around and it remains to be seen if the well regarded Gerry Horkan can make the final cut after his surprise defeat in the Seanad election.

Most Green party sources say look at the election results when it comes to picking a name for a Seanad nominee. The party has a swathe of candidates who got close to the line including popular Kildare North Cllr Vincent P Martin, a brother of deputy leader Catherine Martin.

Up and coming Cork City Cllr Lorna Bogue is also seen as in the frame for her Cork South-Central performance, along with colourful Clare Cllr Róisín Garvey.

It remains to be seen if Mayo native Saoirse McHugh who has spoken out against coalition with Fine Gael or Fianna Fáil will get nominated. She secured a high first preference vote in the Seanad election but did not get sufficient transfers to win a seat.

Dublin city Cllr Hazel Chu had originally been thought a potential candidate in the Seanad election but could now possibly be the next lord mayor of Dublin.