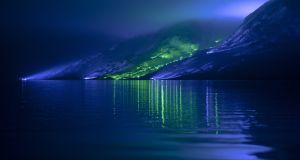 “If a tree falls in a forest and no one is around to hear it, does it make a sound?” Or in this case: if the illumination of a whole Connemara mountain goes ahead anyway, even if audiences cannot see it because of a coronavirus pandemic, has it actually happened?

The answer is yes, and here is what we missed, virtually, digitally: an image of beauty amid the plague.

One of the flagship projects of the Galway 2020 European Capital of Culture programme was to be Savage Beauty this weekend, a massive illumination artwork in the wilds of Connemara, transforming an entire mountain in Joyce Country with light and colour in what was billed as the largest site-specific light artwork ever created.

For the past few weeks Finnish light artist Kari Kola and a Galway 2020 team undertook a huge logistical project on the shores of Loch na Fuaiche in north Connemara, close to the Co Mayo border, to install lighting. It involved a helicopter dropping 16 generators into position at intervals on Ceann Garbh mountain and laying 20km of cable to light 1,000 massive lamps.

Up to 20,000 people were expected to see the mountain washed by vibrant pulsating colours in public events over four nights this St Patrick’s weekend, March 14th-17th. The illumination project – whose title is from Oscar Wilde, who called Connemara “a savage beauty” – was to be viewed over a 5km self-guided walk from the other side of the lakeshore.

Following crowd restrictions to combat Covid-19, Galway 2020 was faced with having to abandon a huge project for which all the work had been completed. But this weekend the lighting show went ahead privately, and was documented in film. Today Galway 2020 made the Savage Beauty artwork available as a “digital edition”, showing what might have been – or what was, but only witnessed physically by locals.

One of those locals was Joe Joyce, who keeps sheep on the mountain – his Joyce Country Sheepdogs demonstrations look out on the lake. He and other locals have been working on Savage Beauty, guiding the team over the mountain they know intimately: “They’re calling us the Shepherds’ Crew,” he says. Visiting the boggy, pink-tinged area on Tuesday – bare trees, mountain streams and the odd hardy sheep – the ambitious and slightly surreal project was shaping up nicely.

Base camp was on a small beach on the shores of Loch na Fuaiche, with container-huts, Jeeps, tons of kit and a temporary jetty for a raft to bring generators out onto the lake, to illuminate from below. Joyce talked about nearby residents’ excitement that their mountain was chosen for an awe-inspiring project that would put them on the map. His longtime neighbours include Carina Coyne from Joyce Country Wool, world-famous basketmaker Joe Hogan and Harry Byrne of Danagher’s Hotel in Cong. It’s a small community in a remote spot, which has lost its post office and local pub recently.

Light artist Kari Kola has directed more than 2,000 projects in dramatic settings, from the opening ceremony of the International Year of Light at Unesco’s Paris headquarters in 2015, to a project at Stonehenge in 2018. This month’s undertaking was to draw light to a mountain in the middle of nowhere.

“Since I can’t paint, I paint with light,” Kola said. “With abstract light, there are as many stories as there are viewers. If I can choose, I always work with nature because that’s the best art that we have. I am very disappointed the public exhibition of this work had to be cancelled, but I hope this digital edition will show how we played with scale in Connemara and created something that people would not expect.”

Cancelling Savage Beauty just as it was about to start was a difficult move for Galway 2020, which last month was forced by Storm Ciara to abandon its large-scale opening ceremony at South Park, facing the bay in Galway city.

Galway 2020 creative director Helen Marriage said she was proud of Kari Kola and the team, “who have worked day and night for the past fortnight in some of the most challenging weather conditions to create this wonderful artwork. We’ve been really moved by how welcome the local community has made us. Their support has been invaluable.” While disappointed that the live exhibitions of Savage Beauty had to be cancelled because of Covid-19, “I’m thrilled we are able to share this special digital edition so as many people as possible are able to experience this extraordinary artwork”.

At Loch na Fuaiche this week before the cancellation, site manager Frank Commins observed:”When are you ever going to light this mountain again? It’s unique, in an environment like this.” He gestured around at the grandeur of valley, lake and mountain. “It’s like Ryan’s Daughter, coming to here. It will showcase the mountain.”