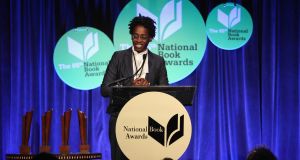 Jacqueline Woodson: Red at The Bone has been longlisted for the 2020 Women’s Prize for Fiction. Photograph: Robin Marchant/Getty Images

If American political activist and Irish-American nationalist Daniel Cohalan is remembered at all in Ireland today, it’s for his bitter falling-out with Eamon de Valera when the latter toured America to raise funds and support for Irish independence in 1919-20. But he was a leading figure in Irish-American nationalism in the first quarter of the 20th century, a significant player in New York politics (having a substantial role in keeping America out of the League of Nations) and a New York supreme court judge. He was leader, with John Devoy, of the American Fenian Clan na Gael and founder of the powerful and influential Friends of Irish Freedom. His loyalty to both Ireland and the US characterised his actions throughout his life and Michael Doorley shows how this sometimes led to tensions between the two allegiances. - Brian Maye

Marco Balzano’s intimate historical novel is already the winner of the 2019 Prix Méditerranée Prize and has been translated into 12 languages. Its English translation is delicate and assured and seems to retain the lyricism and immediacy of the Italian original.

But while this is a historical novel about a young girl attempting to build a life for herself, the themes that emerge from Balzano’s narrative, even as the town is being submerged under waves of fascism, are timeless. Isolation and the sorrow of knowing that she does not belong haunt Trina even as she dreams of what could be different. Trina’s inner life and the inexorable rising waters bridge the temporal divide of years and generations, offering the reader a painfully relevant metaphor for the ways in which we must live our lives in a world that grows increasingly unstable. - Becky Long

To Lahore, With Love by Hina Belitz

As a Londoner, Addy Mayford has been straddling her two cultural identities living in a household composed of her Irish mother and Pakistani Nana. Following the breakdown of her marriage, she goes on a soul-searching trip to Lahore where she discovers shocking secrets and unexpected connections. This fictional journey closely mimics Belitz’ personal excursion to Lahore after her marriage fell apart.

The alchemy of cooking is not only an integral part of Addy’s life but also this story which is peppered with recipes targeted to banish negative sentiments, with names like Calming Cloud Lentil and Happy-Making Muffins. While I was not a fan of these treacly names, thankfully the storyline was less saccharine. This charming novel celebrates the amalgamation of cultures. - Rabeea Saleem

Red at The Bone by Jacqueline Woodson

We can see the imprint of Jacqueline Woodson’s prolific literary career as a young adult and children’s author in her second adult novel, Red at The Bone. The book, which has been longlisted for the 2020 Women’s Prize for Fiction, centres around two black families who have been brought together when teenagers, Iris and Aubrey, become pregnant. Aubrey is a doting father, wanting for nothing more than his family’s happiness. Meanwhile, Iris finds motherhood unfulfilling. She deserts their daughter to pursue her own desires; “Was that cruel?” she asks. A number of voices chime in on this debate; told from five different perspectives, Red at The Bone spans three generations, from the Tulsa race massacre to 9/11. Woodson maintains an authorial kindness common to younger literature, and brings the “big subjects” into the everyday with sensitivity and deft subtlety. - Brigid O’Dea

Theft is a clever book about a clever man who is meandering through life. Raised in a northern town and for many years sharing houses in London with mates, writing for a ridiculous hipster magazine and working in a bookshop, Paul is becoming imperceptibly but increasingly disconnected from any personal progress as the years tick by and much about him remains unchanged. Many of Paul’s cultural references are uber-male writers, who embody white male privilege; we might wonder if they are touchstones, reflecting something of Paul to himself. But moments of sincere tenderness, especially for his mother, sister and a friend who dies by suicide, pluck Paul out of Brexit-obsessed chattering society and show us the unvarnished, slightly lost, charming man beneath the surface. - Claire Looby

In July 2018, at the height of a seemingly endless heatwave, Anthony Murphy and Ken Williams discovered a previously hidden monument close to the Newgrange site in the Boyne Valley. The discovery captured the global imagination and Murphy details the whirlwind of press and archaeological attention that followed in this new book. Featuring beautiful illustrations, photographs and 3D models, Dronehenge not only chronicles the monument’s discovery but offers insight into the ways in which it may have been constructed, and the multiplicity of meanings it offers to modern Ireland. Murphy is fascinated by the idea that the landscape of the Boyne Valley has concealed this wonder for millennia, and by the serendipitous nature of its revelation. Accessible, entertaining and endlessly informative, Murphy has created an extraordinarily generous narrative that offers the reader a clearly signposted road back into the ancient pasts of Ireland.