Communist activist, who died in 2009 aged 92, was born in Smithfield 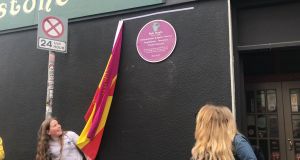 The plaque unveiled in memory of Bob Doyle on North King Street in Smithfield, where Doyle was born. Photograph: Aoife Moore/PA Wire

A plaque has been unveiled in Dublin to honour the late Bob Doyle, a veteran of the Spanish Civil War who fought with the International Brigade against the nationalist general Francisco Franco.

Mr Doyle, who died in 2009 aged 92, was born on North King Street in Smithfield where a plaque was erected in his memory on Saturday.

Organised by the Stoneybatter and Smithfield History project, funding for the plaque was raised by a number of events and donations.

Mr Doyle’s granddaughter unveiled the plaque, and thanked those who had helped arrange the memorial, which she called “a great honour for a great man”.

Mr Doyle joined the anti-treaty IRA in the 1930s and later the Communist Party. He took part in street battles with the Blueshirts and Dublin’s Animal Gangs, who were known for their attacks on labour activists, and one such confrontation left him with permanent damage in his left eye.

In 1937 he decided to join the International Brigade in its defence of a Spanish republic, and was captured at Gandesa by Italian fascist troops. He was imprisoned for 11 months in a concentration camp near Burgos. While interned there he was once brought out to be shot, and he was regularly tortured by Spanish guards and interrogated by the Gestapo before his release in a prisoner exchange.

Returning in 1939 to Ireland, he failed to find work. In England he got a job building air-raid shelters, and later joined the merchant navy.

After his discharge, he worked in the printing trade and became active in the Fleet Street unions. Arrested in 1959 during a mass picket in support of the 40-hour week, he was charged with riotous assembly but cleared by an Old Bailey jury.

A member of the Communist Party of Great Britain, he stood as a candidate in local elections. He also was an enthusiastic campaigner, marching in support of the miners, dockers and steelworkers and against the poll tax.

He spoke regularly at Hyde Park Corner, and sold the Irish Democrat and An Phoblacht.

Late in life he discovered marijuana and grew cannabis plants at home for his own use. But burglars brought an end to his illicit husbandry.

“It all got pinched,” he said of the theft, “and I couldn’t go to the police about it.”

Before his death, he published a book documenting his experiences of the Spanish Civil War called Brigadista: An Irishman’s Fight Against Fascism. -Additional reporting PA