Looking back at Leo Varadkar’s letters to The Irish Times

From the archive: Tone provides insight into future taoiseach’s development as a political animal 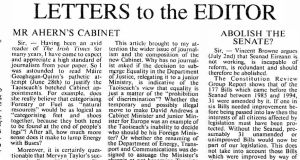 Monday, July 7th, 1997
“Given the Government’s obvious friendship with the Independent Group and local radio’s vested interest in the success of Fianna Fáil, only The Irish Times and RTÉ remain to offer serious journalism and debate to the Irish people. I hope and trust you will soon do that.”
LEO VARADKAR,
Roselawn Road,
Dublin 15

A letter published on July 7th, 1997 was brimming with rage about a piece Máire Geoghegan-Quinn had written about new cabinet positions, or, as the letter-writer put it, her “pathetic attempt to justify the Taoiseach’s botched Cabinet appointments.” Addressing Geoghegan-Quinn’s justifications for the changes, the letter-writer was aghast, writing, “Wha’? Surely this nonsensical pamphlet would have made the editor of Pravda proud.”

The author of the letter was Leo Varadkar, then 18. Varadkar’s passion for Irish and international politics can be seen over the years in The Irish Times letters pages, from his musings on European affairs, to entrenched positions on a number of topics. Varadkar was a curiously prolific letter-writer to the newspaper, and his tone and directness provides plenty of insight into his development as a political animal.

Varadkar wrote too many letters to The Irish Times to mention here, but a few stand out. He and Lucinda Creighton wrote a joint letter in June 2002, disappointed about the proposed new system for electing the leader of Fine Gael not coming to pass, “We feel shocked, appalled and betrayed at the decision of the Fine Gael Parliamentary Party to elect a successor to Michael Noonan under the old, undemocratic system,” they wrote, ending with the classic, “Shame on you all.”

In September of that year, Varadkar wrote another raging riposte to those advocating a No vote in the then upcoming (second) Nice Treaty referendum, particularly Liam O Lonargain, who Varadkar wrote, sarcastically, “achieved a remarkable journalistic tour de force with his article opposing the Nice Treaty. It is extraordinary that he managed to write an article exceeding a thousand words without making one argument against Ireland’s ratification of the treaty.

“He finds enough space to invoke Hitler, the assorted works of Hans Christian Andersen, and even enough room for broadsides against Romano Prodi, Anders Fogh Rasmussen and Bertie Ahern, but does not fine enough space to criticise even one provision of the treaty . . . like most of the No lobby, his arguments are merely a poor disguise for a more sinister aim – the removal of Ireland from the European project itself.”

In April 2004, the now councillor Varadkar, weighed in on Israel and Palestine in the letters page, “Clearly, the Israeli-Palestinian conflict is entering a new phase. At long last, right-wing Zionists such as Ariel Sharon have accepted that they cannot subdue Palestinians and occupy their lands for much longer. The evacuation of Gaza presents the possibility of establishing an independent Palestinian state for the first time in history.” At this point, Varadkar was generally being referred to a bright young thing, or a rising star, along with Creighton, who later torpedoed her political career with a fundamentalist position on abortion.

In October 2004, the future minister for health wrote a letter in response to an Irish Times editorial on low-income patients attending A&E. “Put simply, free services are abused freely. There can be no argument that medical-card eligibility limits must be increased substantially on grounds of both social justice and health care. However, it is foolish to conclude that an increase in medical card numbers will do anything other than put further pressure on already overstretched A&E Departments and GP surgeries.” This time, Varadkar signed the letter “Cllr Leo Varadkar, MB, BCh, Senior House Officer in Emergency Medicine, Dublin 15.”

In 2005, Varadkar had the Colombia Three in his sights, objecting to the use of that phrase, “I am writing to express my despair at the use of the term ‘Colombia Three’ in these pages. Inverted commas or not, it is a propaganda term used by supporters of the three men in an attempt to associate in the minds of the public their case with miscarriages of justice against the Birmingham Six, Guildford Four and Maguire Seven . . . Perhaps you could consider using the term ‘Colombia fugitives’ as the national broadcaster does. Alternatively, might I suggest ‘Colombia criminals’?” Ouch.

In July 2006, Varadkar had a letter about constituency boundary revisions. In January 2007, he was back again, writing about the ill-treatment of Christians in the Middle East. In March 2007, he was having a pop at Fianna Fáil’s attitude towards opposition proposals on tax reform and Bertie Ahern’s speech at that year’s ardfheis, “As an election candidate, I had hoped for a June election to allow me more time to get around my constituency,” Varadkar wrote, “However, as a citizen and taxpayer I am now praying for an election as early as possible lest the Taoiseach loses the run of himself and transports us all back to the ruinous vote-buying policies of 1977.” Buying votes? Surely not.

A poetic response to the pandemic
Real news has value SUBSCRIBE