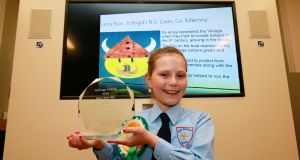 “Fun, funky and colourful” are not words generally ascribed to the Easter Rising but they were foremost in the mind of Síle Tavery from the Scoil Mhuire National School in Lucan when she set out to design an emoji that would best represent Ireland’s heritage.

When asked to come up a modern logo to reflect the past she went with a brightly coloured smiling Easter Egg wearing a starry sash. “I chose a 1916 Easter Rising Egg because while keeping it fun, funky and colourful, it also shows the bravery of our past,” she said in her entry to the heritage emoji competition organised by the National Monuments Service.

Her entry was highly commended by the judges in the competition for children in fourth, fifth and sixth classes run in conjunction with the Department of Culture, Heritage and the Gaeltacht as part of the development of Heritage Ireland 2030.

Its aim was to allow children “to express what they consider important about their heritage” and along with a sash-wearing Easter Rising egg, Vikings, round towers, shamrock and the national games of hurling, football and leprechaun baiting all featured prominently.

Minister for Heritage Josepha Madigan made a flying visit to the Kildare Room of the National Museum of Ireland and told the assembled children that she was a big fan of emojis and said one of the reasons she was late was because she had just come from the Dáil where she had been “sitting next to the Taoiseach”.

The children did not seem overly impressed by either revelation.

They were focused on who would finish on top in the competition which had targeted 3,000 primary schools. The finalists in the room had made their way through local and then regional competitions and the overall winner was Laura Ryan from St Brigid’s National School in Coon, Co Kilkenny, who won with asmiley face with a Viking longship for a mouth wearing a horn-tipped helmet.

The winner of the fourth-class section was Ella Murray from the Taunagh National School In Riverstown, Co Sligo, whose entry featured Newgrange stones prominently. The fifth-class winner was Bonnie Hegarty O’Brien from Timoleague National School in Cork who won with an elaborate emoji featuring monks, round towers and sliotars while the sixth-class winner was Gabrielle Doroz from the Sacred Heart school in Granard, Co Longford, whose emoji featured a longboat prominently.

“These school children are the future leaders of government and policymakers, heritage enthusiasts and professionals,” Ms Madigan said. “As we pass on our heritage inheritance to their generation, so it will be theirs to pass on and we must do all we can to ensure that the heritage which we have inherited can flourish under their care.”