The three funerals of Terence MacSwiney

The events, each with thousands of mourners, were key moments in the battle for independence 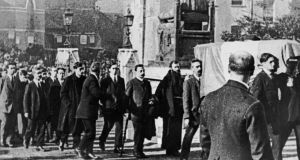 “I thought the age of body-snatching was gone,” yelled Fr Dan Walsh as British forces commandeered the remains of Terence MacSwiney, the Lord Mayor of Cork, to prevent the coffin being taken to Dublin.

MacSwiney had died in Brixton prison after a 74-day hunger strike which had caught the attention of the world’s press and raised the profile of calls for an independent Ireland. Even after death MacSwiney remained in the headlines with his supporters planning three funerals for the republican activist: the first in London; then Dublin; before his burial in Cork.

These funerals, with thousands of mourners in attendance across all three cities, were key moments in the Irish battle for independence.

Following the murder of his friend and predecessor Tomás Mac Curtain by the Royal Irish Constabulary, MacSwiney was elected to Lord Mayor in March 1920 as the War of Independence raged. On August 12th, the British forces arrested MacSwiney in Cork for possession of “seditious articles and documents”, and for the possession of a cipher key. He was summarily tried on August 16th and sentenced to two years’ imprisonment at Brixton, away from his family and supporters. MacSwiney immediately began a hunger strike in protest against his conviction.

“Terry”, as his family knew him, was well known for his Catholic piety and received daily Communion throughout his hunger strike. He also requested that his family, who had also travelled to London, read to him from The Imitation of Christ, the 15th-century treatise by the German-born monk Thomas à Kempis. MacSwiney repeatedly requested the section entitled “Thoughts on Death” so that he might find consolation in the words: “Learn to die to the world now, that then you may begin to live with Christ.”

His wife, Muriel, spoke at the inquest following his death and insisted her husband did not wish to die and so his passing should not be ruled suicide. Dr Griffiths, Brixton prison’s senior medial officer, reported that MacSwiney often stated he “would get out of prison alive or dead” and that, if released, he would agree to take food. Indeed, the coroner ruled that MacSwiney died of heart failure and not of suicide.

A further struggle was contested over the future of MacSwiney’s remains as his family’s request to remove the body to London’s Southwark Cathedral was denied. Their greatest fear was that the authorities would bury him within the prison grounds, preventing mourners from visiting his grave and removing the risk of a large, politically-charged funeral.

However, after escalating their request to the British government, the Home Office offered a ship, free of charge, to sail the body directly to Cork. An official Irish state funeral in Dublin, they believed, would also cause trouble.

Yet Muriel MacSwiney refused to back down and demanded a meeting with British home secretary Edward Shortt. As Dave Hannigan notes in Terence MacSwiney: The Hunger Strike that Rocked an Empire, Muriel highlighted the cases of Irish volunteers Richard Coleman and Pierce McCan, who had died of disease while serving sentences in English prisons with their bodies immediately released to their next-of-kin.

Her persistence worked as eventually Shortt agreed to allow the MacSwiney family to take the body to the Catholic St George’s Cathedral in Southwark, under the guidance of Bishop Peter Amigo.

Bishop Amigo campaigned on MacSwiney’s behalf throughout his hunger strike, writing to politicians at Westminster petitioning his release. In a telegram to prime minister David Lloyd George on September 5th, Bishop Amigo warned: “Resentment will be very bitter if he is allowed to die.”

Yet some in Amigo’s own diocese thought he meddled too much in Irish affairs, with one anonymous author telegramming: “English Bishops, English Priests for English people”. By contrast, Cardinal Francis Bourne, the Catholic Archbishop of Westminster and head of the English and Welsh Catholic Church, did not publicly comment and privately argued a hunger strike to the death was suicide.

Officiating republican funerals had been an issue for the Irish Catholic Church since the mid-19th century. Cardinal Paul Cullen censored Fr Patrick Lavelle for leading the funeral of a Fenian in 1861. At the turn of the century, some Irish bishops, such as Bishop Daniel Cohalan of Cork, began excommunicating republicans as the battle for independence intensified.

Funerals became an opportunity for republicans to rally their supporters. Tens of thousands lined the Dublin streets to pay their respects to nationalist leader Charles Stewart Parnell in 1891, while similar numbers gathered for Fenian Jeremiah O’Donovan Rossa’s funeral in 1915. Patrick Pearse declared at Rossa’s graveside: “They have left us our Fenian dead, and, while Ireland holds these graves, Ireland unfree shall never be at peace.”

Some scholars have cited these words as the catalyst for the 1916 Easter Rising and subsequent War of Independence.

The following day, Bishop William Cotter of Portsmouth gave the Solemn Requiem with Bishop Amigo, Archbishop Daniel Mannix of Melbourne, and Archbishop Anselm Kennealy of Simla, India, in attendance. Tens of thousands followed the procession from the cathedral to Euston railway station, where a train would take MacSwiney and a legion of mourners to Holyhead. A ship would then take the coffin to Dublin for a second funeral.

Yet the train carrying MacSwiney’s remains, and a substantial number of police officers, left early and arrived at the port hours before the mourners. It soon became apparent that the Home Office had rescinded their agreement of a funeral without contingencies.

MacSwiney’s legacy remains long-lasting, not just in Ireland but in India, where his posthumously published writings influenced Jawaharlal Nehru and Mahatma Gandhi

Fearing large-scale demonstrations in Dublin, the British government had arranged for the British ship Rathmore to sail directly to Cork. As MacSwiney’s siblings positioned themselves around the coffin so that it could not be put on board the ship, they were dragged away by the policemen. The bad feeling intensified as stories were told of British soldiers sitting on the coffin smoking cigarettes and playing cards during the voyage.

Despite the lack of a body, the Dáil Éireann decided MacSwiney’s Dublin funeral would go ahead and called for a day of mourning. The city was silent, with most businesses closed out of respect. Archbishop William Walsh presided over the Dublin Requiem Mass at a crowded Pro-Cathedral on Marlborough Street.

Tens of thousands of mourners gathered behind the empty hearse drawn by four black horses, with many spectators doffing their hats and kneeling in prayer as it passed. Two lorries of British soldiers attempted to disrupt the procession by driving through the crowds and, when the hearse reached Kingsbridge train station, it was met with an armoured car.

MacSwiney’s remains were transferred to the Mary Tavy when they arrived in Cobh, before docking in Cork city and awaiting the arrival of his family from London. They accepted the body with a guard of Irish Volunteers marching in formation to deposit the coffin at Cork City Hall, to lay in state. It appeared the city itself was draped in black, such was the sense of mourning and loss.

MacSwiney’s Requiem Mass and funeral in the Cathedral of St Mary and St Anne on October 31st once again attracted huge crowds. He was buried wearing his IRA uniform at the republican plot in St Finbarr’s Cemetery, with Sinn Féin founder Arthur Griffith delivering the graveside oration.

Bishop Cohalan’s open letter for the Cork Examiner, declaring: “Terence MacSwiney takes his place among the martyrs in the sacred cause of the freedom of Ireland” struck a chord.

Yet Francis Costello has noted the complicated relationship between the Catholic Church and the republican cause in Enduring the Most: The Life and Death of Terence MacSwiney, as, three years later, Cohalan denied hunger striker Dennis Barry the rites of a Christian burial. Furthermore, when MacSwiney’s sister Mary went on hunger strike while interned for criticising the 1921 Anglo-Irish Treaty, Cohalan condemned her actions as self-murder. The proclamation of martyrs then, can appear to be used for one’s self-interests.

The republican propaganda victory the British government feared was realised in all three cities as contemporary footage shows. MacSwiney’s legacy remains long-lasting, not just in Ireland but in India, where his posthumously published writings influenced Jawaharlal Nehru and Mahatma Gandhi.

His three funerals also became a blueprint for IRA funerals, especially those during the 1981 hunger strike in Long Kesh/Maze Prison. In particular, the IRA were keen to connect MacSwiney to Bobby Sands in order to reinforce their claims on the monopoly of republican heritage. After Sands’s death, the IRA promoted a connection between him and MacSwiney through religious symbolism depicted in Northern Irish murals and in highlighting Sands’s diary entries on the matter.

Republicans continue to use funerals as a way to connect with their heritage today, as well as to demonstrate public support for their leadership. In the hundred years since MacSwiney’s death, the tradition of the public and performative funeral continues.

Maggie Scull is the author of The Catholic Church and the Northern Ireland “Troubles”, 1968-98 (Oxford University Press)